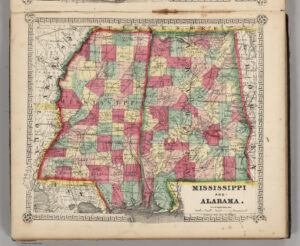 If you look at a map of the United States and focus on the southeast portion of the country, you might notice something kind of unusual. Look directly at Mississippi and Alabama. See anything strange or interesting. If you see that the two states are near mirror images of each other, you’re seeing what I’m seeing. There’s a story behind why these two states look so much alike.

At one point in our country’s early history, Georgia was three times the size it is now. It encompassed the land we now know as Georgia, as well as modern day Alabama and Mississippi.

After the Revolutionary War, Georgia was financially and militarily weak. They had trouble protecting the western part of the state, known as the Yazoo Lands, named after the river that runs through the area. The state legislature tried a couple different times to establish settlements in this area, but they were unsuccessful. A third attempt ended when the state demanded that land speculators pay for their land in gold and silver, rather than in the depreciated paper currency. The speculators balked and Georgia was back at square one.

In 1794, Georgia reached an agreement to sell 35 million acres (the size of present-day Mississippi and Alabama) to four companies for $500,000. But to get approval for the sale, the state had to “gift” substantial land holdings to US Senator James Gunn, several state legislators, state officials, newspaper editors, and other influential Georgians. When word got out, angry Georgians protested the sale, claiming bribery and corruption.

When US Senator James Jackson learned of the sale, he returned home from Washington, determined to overturn the arrangement. He held hearings that led to the 1796 Rescinding Act, overturning the sale of the Yazoo Lands. In 1802, the Yazoo Lands were sold to the federal government, who quickly extinguished any claims to the land by Native Americans.

Although Mississippi and Alabama were split equally, the Alabama legislature wanted more land. Between 1811 and 1901, Alabama tried several times to annex the land in the western panhandle of Florida. The Florida territorial government, and later, the state legislature, rebuffed these attempts. But after the Civil War, it became obvious that the western panhandle was much more connected to Alabama both spiritually, and by infrastructure, than it was to Florida. For instance, Pensacola was connected by train to Mobile and Birmingham in Alabama, but to get to the Florida capital in Tallahassee required an arduous journey through swamps and thickets.

I find this type of history fascinating. It’s easy to take something as mundane as a state’s shape for granted, but there’s almost always a story of corruption or intrigue from long ago that led to what we now take for granted. The shape of the states of Mississippi and Alabama is one such story.