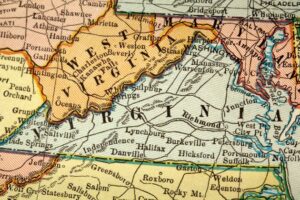 People of a certain age don’t even have to think about what words come after the phrase, “Almost Heaven.” The obvious answer is, “West Virginia.” But is that really correct?

There’s fairly strong evidence to suggest that the words following “Almost Heaven” are, “west Virginia.” In other words, the western part of the commonwealth of Virginia as opposed to the state of West Virginia.

In case you’re unaware, the line in question is the opening line to John Denver’s 1971 hit, “Take Me Home Country Roads.” The following line is, “Blue Ridge Mountains, Shenandoah River.” It’s this second line that gives us some insight into exactly what Denver was singing about.

The Shenandoah River runs for 150 miles, from it’s headwaters near Front Royal, VA to the Potomac River near Washington DC. Again, the Shenandoah barely crosses into West Virginia, running for about 20 miles through the eastern panhandle.

Despite these facts, it’s unlikely that Denver knew which state he was signing about. At the time he recorded the song, he had never set foot in either Virginia or West Virginia. His co-writers, Bill Danoff and Taffy Nifert, claim that the song was inspired by a drive they took on Interstate 81, which runs primarily through western Virginia.

But to make thing more complicated, Danoff and Denver said in an interview that they wanted to write the song about two completely different states. Danoff wanted to write the song about his home state of Massachusetts but couldn’t get the cadence right using that state. For his part, Denver said that he was inspired by Maryland, but just as with Danoff, couldn’t get the state name to work in the song.

Despite the controversy, West Virginia doesn’t seem to care much about which state the song is about. They’ve adopted it as one of four state anthems, and when the University of West Virginia football team wins a game (which they often do), the marching band launches into “Take Me Home Country Roads.”

So, which is it? Is the song about West Virginia or west Virginia? We may never know.