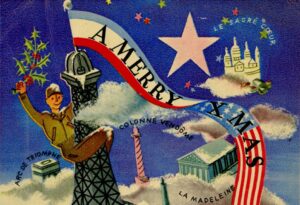 By Christmas Eve 77-years ago, American troops had advanced well into Europe, storming the beaches at Normandy six months earlier, and pushing German troops out of France, back toward the Fatherland.

At the time, my dad was an 18-year-old kid who had recently landed in England with the 2nd Engineer Battalion of the 89th Infantry Division, Company B. His unit was preparing to cross the English Channel the following month to push across France and ultimately engage Nazi troops near Trier, Germany. Little did any of them know that over the following four-plus months they would battle a desperate-but-not-yet-defeated German army, would witness some of the most disturbing sights of human cruelty the world has ever known, and they’d celebrate the liberation of Paris and the end of the war in Europe.

Like many of his fellow soldiers, Dad’s deployment to Europe was the first time he had ever been outside the United States. For the first Christmas in his young life, he was far away from his home and his loved ones.

President Franklin D. Roosevelt spoke to the emotions he knew U.S. troops were feeling during the holiday season, a season the President knew meant so much to so many Americans. As he did each year on Christmas Eve, Roosevelt addressed the American people at home and our troops stationed around the world. As people gathered around their radios, unsure of what the future held for themselves and their loved ones, this is what FDR had to say:

“Here, at home, we will celebrate this Christmas Day in our traditional American way- because of its deep spiritual meaning to us; because the teachings of Christ are fundamental in our lives; and because we want our youngest generation to grow up knowing the significance of this tradition and the story of the coming of the immortal Prince of Peace and Good Will. But, in perhaps every home in the United States, sad and anxious thoughts will be continually with the millions of our loved ones who are suffering hardships and misery, and who are risking their very lives to preserve for us and for all mankind the fruits of His teachings and the foundations of civilization itself.

“The Christmas spirit lives tonight in the bitter cold of the front lines in Europe and in the heat of the jungles and swamps of Burma and the Pacific islands. Even the roar of our bombers and fighters in the air and the guns of our ships at sea will not drown out the messages of Christmas which come to the hearts of our fighting men. The thoughts of these men tonight will turn to us here at home around our Christmas trees, surrounded by our children and grandchildren and their Christmas stockings and gifts—just as our own thoughts go out to them, tonight and every night, in their distant places.

“We all know how anxious they are to be home with us, and they know how anxious we are to have them- and how determined every one of us is to make their day of home-coming as early as possible. And- above all- they know the determination of all right-thinking people and Nations, that Christmases such as those that we have known in these years of world tragedy shall not come again to beset the souls of the children of God.

“This generation has passed through many recent years of deep darkness, watching the spread of the poison of Hitlerism and Fascism in Europe—the growth of imperialism and militarism in Japan- and the final clash of war all over the world. Then came the dark days of the fall of France, and the ruthless bombing of England, and the desperate battle of the Atlantic, and of Pearl Harbor and Corregidor and Singapore.

“Since then the prayers of good men and women and children the world over have been answered. The tide of battle has turned, slowly but inexorably, against those who sought to destroy civilization.

“On this Christmas day, we cannot yet say when our victory will come. Our enemies still fight fanatically. They still have reserves of men and military power. But, they themselves know that they and their evil works are doomed. We may hasten the day of their doom if we here at home continue to do our full share.

“And we pray that that day may come soon. We pray that until then, God will protect our gallant men and women in the uniforms of the United Nations- that He will receive into His infinite grace those who make their supreme sacrifice in the cause of righteousness, in the cause of love of Him and His teachings.

“We pray that with victory will come a new day of peace on earth in which all the Nations of the earth will join together for all time. That is the spirit of Christmas, the holy day. May that spirit live and grow throughout the world in all the years to come.”

Addendum: Winston Churchill, Prime Minister of Great Britain, was staying at the White House on Christmas Eve, 1944. That night, he also spoke to the American people. Here is the audio of his remarks.