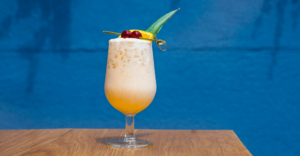 Have you ever heard the song “Escape (The Pina Colada Song)” by Rupert Holmes? Everyone over the age of fifty or so has probably heard the song hundreds of times. It was a number one hit and was played incessantly on the radio in the late 1970s. If you’ve never heard the song, let me tell you about it.

The narrator of the song is tired of his relationship with his wife or girlfriend. It’s never clear if he’s married or just dating. He thinks his relationship is boring, so he scans the personal ads in the newspaper.

For younger readers, this might seem crazy, but back in the dark ages of the 1970s, there was no Match.com, eHarmony, or Tinder. If you were looking for a date, you took out a classified ad in the newspaper and hoped that someone would read it and respond. Crazy, I know. It’s amazing any of us are still alive.

Anyway, the guy in the song sees a personal ad that catches his eye. The ad reads:

“If you like Pina Coladas, and getting caught in the rain
If you’re not into yoga, if you have half a brain
If you like making love at midnight, in the dunes of the cape
I’m the love that you’ve looked for, write to me, and escape”

Who could blame a guy for falling for that kind of poetry and passion in just four lines? Our song narrator couldn’t. So, what did he do? Did he write to the Pina Colada women? No, he did not. This is one of the many things I don’t understand about the song. Maybe I just don’t remember how personal ads worked, but I thought the person posting the personal ad included a way to contact her, like a phone number or a mailbox provided by the newspaper. In her personal ad, she even says, in the last line, “write to me.”

But our songster doesn’t write to her. He places another personal ad. That seems risky, doesn’t it? How does he know the woman he is responding to would even see his ad? Talk about a long shot. I’m sorry, but color me skeptical.

Here’s what our narrator wrote in his personal ad:

“Yes, I like Pina Coladas, and getting caught in the rain
I’m not much into health food, I am into champagne
I’ve got to meet you by tomorrow noon, and cut through all this red tape
At a bar called O’Malley’s, where we’ll plan our escape”

Naturally, if the woman from the first personal ad didn’t see his personal ad, it wouldn’t be much of a song, would it? So, miracle of miracles, she sees our hero’s personal ad and shows up to O’Malley’s.

Before I move on, let me discuss O’Malley’s Bar. Have you ever heard of a high-class club called O’Malley’s? I know, this is all fictional. It didn’t really happen. But if you were going to make up a place to meet a make-believe date and you wanted to impress her, would you call it O’Malley’s? I wouldn’t. O’Malley’s sounds like a place you’d go with your mates after the rugby match, or a place that functioning alcoholics gather after work. It doesn’t sound like a swank place to take a date.

Sorry for the tangent. Back to the song.

So, our hero is waiting at O’Malley’s, and his date from the personal ad shows up. Here’s what happens:

“So I waited with high hopes, then she walked in the place
I knew her smile in an instant, I knew the curve of her face
It was my own lovely lady, and she said, ‘Oh, it’s you’
And we laughed for a moment, and I said, ‘I never knew’”

At this point, my BS meter is going nuts. Are you kidding me? They both just realized that their significant other is looking for a hook up, and they’re both fine with it? I don’t think that’s how relationships work. The relationship is so bad that they both want to cheat, but when they both get caught, they laugh it off and decide to stay together. I don’t think so.

Also, is it just the way I’m reading it, or does the wife/girlfriend sound horribly disappointed when she says “Oh, it’s you?” If I was the guy, I wouldn’t be so anxious to stay in this relationship. He should really watch his back. She doesn’t seem that into him.

The song was originally called simply “Escape.” There was no mention of pina coladas. In fact, originally, pina coladas weren’t even mentioned in the song. The original lyric was, “If you like Humphrey Bogart…” That’s right. Humphrey Bogart. Not quite as romantic or tropical as pina colada, is it? After Holmes wrote the song, he decided Humphrey Bogart wasn’t the feel he was looking for. He thought substituting an alcoholic drink might be the way to go, something tropical, and pina colada was one of the first drinks that came into his head. At that point, he had never had one and wasn’t sure what was in the drink, but it fit phonetically, so he went with it.

Although “Escape (The Pina Colada Song)” is the biggest hit of his career, Holmes didn’t view it that way when he wrote the song. He needed one song to finish an album, and wasn’t all that crazy about “Escape”. He just wanted to finish writing it, get it recorded, and go home.

So, while he was writing the lyrics, struggling to find a replacement word or phrase for “Humphrey Bogart,” the drummer from Holmes band got drunk. In fact, too drunk to play on the song. So, he was stuffed into a taxi and sent home, leaving Holmes to use a basic form of sampling for the drum track. It wasn’t ideal, but Holmes wasn’t too concerned. “Escape” was just a filler track so he could finish recording the album.

In a 2003 interview with SongFacts Magazine, Holmes said, “The original lyrics said, ‘If you like Humphrey Bogart and getting caught in the rain.’… As I was getting on mic I thought to myself, I’ve done so many movie references to Bogart and wide-screen cinema on my earlier albums, maybe I shouldn’t do one here. I thought, what can I substitute? Well, this woman wants an escape, like she wants to go on vacation to the islands. When you go on vacation to the islands, when you sit on the beach and someone asks you if you’d like a drink, you never order a Budweiser, you don’t have a beer. You’re on vacation, you want a drink in a hollowed-out pineapple with the flags of all nations and a parasol. If the drink is blue you’d be very happy. And a long straw. I thought, what are those escape drinks? Let’s see, there’s daiquiri, mai tai, piña colada… I wonder what a piña colada tastes like? I’ve never even had one. I thought that instead of singing, ‘If you like Humphrey Bogart,’ with the emphasis on like, I could start it a syllable earlier and go, ‘If you like piña-a coladas.’”

When the album was finished, the studio decided they wanted to release “Escape” as a single. Holmes thought it was a bad idea, but didn’t fight them. The song floundered, never rising very high on the Billboard charts in the US. Then radio stations began reporting that they were being inundated with requests for “The Pina Colada Song.” Problem was, there was no song named “The Pina Colada Song”. The studio contacted Holmes and requested that the song be renamed. Holmes refused, but they came to a compromise: “Escape (The Pina Colada Song).” Once the song was renamed, it shot to number one.

Since then, “Escape (The Pina Colada Song)” has been featured in movies, such as Shrek, Guardians of the Galaxy, Grown Ups, and Like Father, as well as TV shows, such as Third Watch, The Goldbergs, Splitting Up Together, Living with Yourself, and It’s Always Sunny in Philadelphia. Not bad for a song that was considered a throw away by its author.

Rupert Holmes is considered a bit of a one hit wonder by many people. However, that’s not only unfair, but incorrect. He had eight songs on the Billboard 100, including “Him,” that peaked at number six, and “Answering Machine,” which rose to number thirty-two. Also, before writing “Escape (The Pina Colada Song),” he wrote songs for other artists, including Dolly Parton, Gene Pitney, and The Drifters. Here’s a song he wrote for The Partridge Family:

And here’s one that was included in Barbara Streisand’s hit movie, A Star is Born:

After writing “Escape (The Pina Colada Song),” Holmes expanded his horizons, writing a mystery novel entitled Where the Truth Lies, which won the Edgar Award and was turned into a movie starring Kevin Bacon. He also penned a play called The Mystery of Edwin Drood (later known as Drood) that won a Tony Award. He also created and wrote the American Movies Classic TV show Remember WENN.

Here is Holmes explaining the creation of “Escape (The Pina Colada Song),” as well as doing the song live: