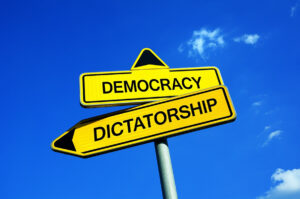 I have a sinking feeling, a sense of dread that is threatening to consume me. And every day, it seems to get worse.

Although I try to avoid writing about politics these days, I feel the need to express what I’m feeling. Politically, things are not “business as usual” in the United States at the moment. We are as close to losing our democracy as we’ve ever been (even more so than during the Civil War), and each day brings more cause for concern.

We have two political parties in this country; one trying to save democracy and one pushing it toward authoritarianism. The party pushing for authoritarianism is ruthless and shameless and power-hungry. They exist to reclaim power, with little to no interest in actually using that power for the good of the country.

The party trying to save democracy is largely timid and ineffective, often concerned more with process than progress. They seemingly care more about institutional integrity and decorum than they do with stopping the destruction of our form of government and way of life.

The party pushing for authoritarianism is filled with unrepentant liars, aided by a cadre of right-wing media outlets that both create and amplify bigger and more outlandish lies. The lies are often proven false by fact checkers, yet they persist.

The party working to save democracy often ignores the lies, as if they will just go away. They want to investigate corruption and insurrection, but they refuse to do so without the authoritarian party’s permission.

We have a president that, by all accounts, is a decent, honorable man, but he refuses to get caught up in the fray. He presides the way a president from another time would preside. He goes about the job of governing without paying heed to those that would destroy the very country he is governing. He is a man seemingly unequal to the task before him. While his house is being robbed, he makes sure the dishes are put away and the beds are made.

Almost every day since our democracy was attacked and Congress was seized by insurrectionists, new, damning information has come out laying blame for the insurrection at the feet of former President Trump, several high-ranking officials in his administration, and a handful of Congresspeople who insist that there was no insurrection, even as they work to foment another one. Yet, no one in a position of power has been arrested, charged with a crime, or otherwise made to account for their actions.

I’m hopeless because the authoritarian party currently has the upper hand. Even as a minority party, they have been successful in obstructing the business of the Congress. And if pundits are correct, the authoritarian party is likely to take over both houses of Congress in 2022. When that happens, it is unlikely that we will ever see our democracy again.

Timothy Snyder, Professor of History at Yale University and an expert in fascism and rising authoritarianism, wrote this about our present circumstance:

“President Trump tells a big lie that elections are rigged. This authorizes him and others to seek power in extra-democratic ways. The lie is institutionalized by state legislation that suppresses voting, and that gives state legislatures themselves the right to decide how to allocate the electoral vote in presidential elections.

“The scenario then goes like this. The Republicans win back the House and Senate in 2022, in part thanks to voter suppression. The Republican candidate in 2024 loses the popular vote by several million and the electoral vote by the margin of a few states. State legislatures, claiming fraud, alter the electoral count vote. The House and Senate accept that altered count. The losing candidate becomes the president. We no longer have “democratically elected government.” And people are angry.

“No one is seeking to hide that this is the plan. It is right there out in the open. The prospective Republican candidates for 2024, Donald Trump, Ted Cruz, and Josh Hawley, are all running on a big lie platform. If your platform is that elections do not work, you are saying that you intend to come to power some other way. The big lie is designed not to win an election, but to discredit one. Any candidate who tells it is alienating most Americans, and preparing a minority for a scenario where fraud is claimed. This is just what Trump tried in 2020, and it led to a coup attempt in January 2021. It will be worse in January 2025.”

There are a thousand reasons I’m feeling dread about the future of our nation. But there’s one reason I am hopeful. I have always believed in the goodness of the American people. We get things wrong a lot, but we usually find a way to make things right. My hope is that most people who support the party of authoritarianism do so out of habit, not out of a wish for authoritarianism. When they see what their party is doing to this nation, how they have been constantly lied to and played for fools, my fervent wish is that these people will come around to the cause of democracy.

My further hope is that the goodness and perseverance of the American people will kickstart a new commitment to democracy, pushing the party of democracy to do whatever is necessary to defeat those that would bring our country to bended knee in service of their proto-fascist agenda.

It’s clear that the authoritarian party is not interested in governing, let alone participating in bipartisan legislation. It’s time for the party of democracy to use their majority to push through programs designed to help the many rather than the few; programs like HR 1 “For The People” Act and the John Lewis Voting Rights Act, designed to restore and strengthen our democracy. Tomorrow may be too late. The time to act is now.

ADDENDUM: After finishing this essay, I remembered a Twitter thread written by Thomas Zimmer, history professor at Georgetown University, that captured my feelings on the democracy vs authoritarian crisis we are facing. It’s worth a read:

“Unless the system is fundamentally democratized, we’ll soon reach the point where it will become impossible to stop America’s slide into authoritarianism through elections. Some thoughts on what is at stake, based on this important piece by @RonBrownstein:

“If democratizing reforms do not come, all the states in which Republicans are in power will soon resemble apartheid South Africa much more than anything that could reasonably be called a functioning multiracial democracy. In about half the states, Republicans will be erecting stable one-party rule and install a system that is best described as a herrenvolk democracy: A system that is fairly democratic if you happen to be a white Christian man – and something entirely different if you are not.

“Does that sound far-fetched? Alarmist? It’s not. In many ways, it would constitute a return to the pre-1960s situation and be much closer to the historical norm in the United States. Remember that until the 1960s, apartheid was the reality in many regions of the country.

“What about the national level? If you combine the current system’s anti-majoritarian distortions with the GOP’s many aggressive anti-democratic initiatives, Republicans are basically guaranteed enough power to obstruct and make functional Democratic governance impossible. The result is definitely not a functioning democracy.

“The question is: Would it even be a sustainable country? @davidmfaris worries about a breakup in this interview – and he’s right! America is already facing a crisis of democratic legitimacy, and it’s only getting worse.

“In a representative democracy, the party that consistently gets significantly fewer votes on all levels of government shouldn’t be able to hold onto power and control the nation’s fate. At some point, this crisis of legitimacy will have to be resolved – one way or another.

“History doesn’t repeat itself. There won’t be another Civil War blue vs. gray – the coming crisis will look different. But the idea that things are definitely going to work out somehow is mainly based on a ‘It can’t happen here’ type of American exceptionalism. And still, ‘It cannot happen here’ seems to be, as @AmandiOnAir puts it in the @RonBrownstein piece, the animating principle for too many Democratic officials and liberals more broadly. American democracy can’t afford this sort of willful ignorance and naivety.

“We must face the fact that the radicalization of the Republican Party has outpaced what even most critical observers imagined, and we need to grapple with what that should mean for our expectations going forward and start thinking about real worst-case scenarios.

I think @perrybaconjr really captured the situation perfectly in last week’s important column: ‘Perhaps democracy dies faster in darkness. But it could also die slowly in the light, as all of us watched but didn’t do enough to save it.’

“I understand the criticism of what @ezraklein calls a “self-fulfilling cycle” in this great conversation with @pastpunditry: By emphasizing how high the stakes are, they get even higher – making it more difficult to solve the situation politically. But I maintain that for journalists, analysts, and scholars, the prime responsibility is to cover, describe, assess, and interpret American politics as objectively, accurately, and adequately as possible. We shouldn’t downplay, appease, play politics.

“I don’t think the situation is all bad, by the way. Reactionary forces are radicalizing because America really has become more liberal, more pluralistic, and is closer to being a truly multi-racial democracy than it’s ever been. But that’s exactly what makes the current moment so acutely dangerous. Reactionaries who define “real America” as a nation dominated by white Christians feel their backs against the wall and are convinced that all measures are justified to defeat an illegitimate opponent.

“I believe this struggle is of world-historic significance. And we are witnessing a very similar conflict in all Western democracies: Is it possible to establish a stable, truly multiracial, truly pluralistic democracy?

“I tried to make this point at the end of this @DinDpodcast, on democracy in Europe and how it compares to the situation in the U.S.: Such a truly multiracial, pluralistic democracy has never been achieved anywhere – it would be a world-historic first.  There have been several stable, fairly liberal democracies – but either they have been culturally and ethnically homogeneous to begin with (think Sweden); or there has always been a pretty clearly defined ruling group, or “herrenvolk.” A truly multiracial, pluralistic democracy in which an individual’s status was not determined to a significant degree by race, gender, or religion? I don’t think that’s ever been achieved anywhere.

“The U.S. is in many ways the most advanced, most acute test case: Will it become a stable multiracial, pluralistic democracy – or remain a white Christian nation, defined by white Christianism, in which white Christians dominate socially, politically, and culturally? It’s an open question, one of enormous significance for all of us, all democracies around the world. Which is why the stakes, right now, are enormously high. We must hope that Democratic elected officials understand the situation – and are willing to act accordingly.

“Democrats will have to accept the challenge that accompanies the recognition that they will act alone to protect democracy, or it won’t happen at all.’ This here, from @ThePlumLineGS, goes right to the heart of the matter. So the question is: Will they? “

One Reply to “Democracy or Authoritarianism: What’s It Going To Be?”