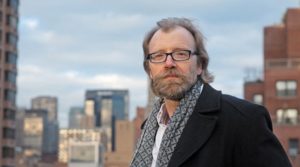 George Saunders is one of my favorite writers. His books include The Tenth of December, CivilWarLand in Bad Decline, Pastoralia, and my favorite, Lincoln in the Bardo. In case you don’t know, Saunders is one of the pre-eminent short story writers of our time. In addition, he is a professor of creative writing at Syracuse University. He is equal parts writer, teacher, and thinking, feeling human being.

Saunders recently wrote a short story entitled “Love Letter” that was published in The New Yorker. In the story, a grandfather is writing a letter to his grandson. The grandson’s friend (girlfriend?) is in trouble with the government, and the grandson has turned to the grandfather for advice. I thought it odd that Saunders decided to refer to many of the characters in the story only by the first initial of their first name, but as the letter to the grandson unfolds, the reason becomes clear.

The grandfather does his best to explain the fascist regime that has taken over the country without actually referring to the fascists or their behavior, presumably for fear of what could happen if the letter ever falls into the wrong hands. Perhaps the most heartbreaking part of the story is the grandfather’s attempts to explain why he and his wife didn’t do anything when the fascists first appeared.

“Seen in retrospect, yes: I have regrets. There was a certain critical period. I see that now. During that period, your grandmother and I were doing, every night, a jigsaw puzzle each, at that dining-room table I know you know well, we were planning to have the kitchen redone, were in the midst of having the walls out in the yard rebuilt at great expense, I was experiencing the first intimations of the dental issues I know you have heard so much (too much?) about. Every night, as we sat across from each other, doing those puzzles, from the TV in the next room blared this litany of things that had never before happened, that we could never have imagined happening, that were now happening, and the only response from the TV pundits was a wry, satirical smugness that assumed, as we assumed, that those things could and would soon be undone and that all would return to normal—that some adult or adults would arrive, as they had always arrived in the past, to set things right. It did not seem (and please destroy this letter after you have read it) that someone so clownish could disrupt something so noble and time-tested and seemingly strong, that had been with us literally every day of our lives. We had taken, in other words, a profound gift for granted. Did not know the gift was a fluke, a chimera, a wonderful accident of consensus and mutual understanding.”

As with all of Saunders’ writing, the prose  in “Love Letter” is subtle and nuanced. Even so, it is not difficult to figure out what country he is talking about and who the clownish one might be.

“Love Letter” is powerful, beautiful, heart-breaking and all too real. It should not only be read, but its morals and lessons, as subtle as they are, should be heeded.

As I mentioned, Saunders teaches creative writing at Syracuse University. Because the pandemic shut down colleges so quickly, he did not have an opportunity to say goodbye to his graduating students. So, he penned a letter to them. In it, he gave them some advice that is valuable, not only to his students, but to us all.

“We are (and especially you are) the generation that is going to have to help us make sense of this and recover afterward. What new forms might you invent, to fictionalize an event like this, where all of the drama is happening in private, essentially? Are you keeping records of the e-mails and texts you’re getting, the thoughts you’re having, the way your hearts and minds are reacting to this strange new way of living? It’s all important. Fifty years from now, people the age you are now won’t believe this ever happened (or will do the sort of eye roll we all do when someone tells us something about some crazy thing that happened in 1970.) What will convince that future kid is what you are able to write about this, and what you’re able to write about it will depend on how much sharp attention you are paying now, and what records you keep.”

Pay attention to what is going on around you, how you are feeling, how those feelings are manifested. We are not living through normal times. Someday, in a few years or many, we will need to explain to our children and grandchildren what life in 2020 was like. Others may try to gaslight this period in history. We must be witnesses to what truly happened.

Saunders goes on in the letter to share a beautiful metaphor that should bring some small measure of comfort to those of us freaking out over the changes we are living through.

“But I guess what I’m trying to say is that the world is like a sleeping tiger and we tend to live our lives there on its back. (We’re much smaller than the tiger, obviously. We’re like Barbies and Kens on the back of a tiger.) And now and then that tiger wakes up. And that is terrifying. Sometimes it wakes up and someone we love dies. Or someone breaks our heart. Or there’s a pandemic. But this is far from the first time that tiger has come awake. He/she has been doing it since the beginning of time and will never stop doing it. And always there have been writers to observe it and (later) make some sort of sense of it, or at least bear witness to it. It’s good for the world for a writer to bear witness, and it’s good for the writer, too. Especially if she can bear witness with love and humor and, despite it all, some fondness for the world, just as it is manifesting, warts and all.”

Never in our lifetimes have we lived through a time like we are living through right now. That is, unless you were alive for the Spanish Flu epidemic. Since most of us weren’t, this is all new territory. But, just as Saunders points out, everything is always changing. “It’s only when we expect solidity—non-change—that we get taken by surprise. (And we always expect solidity, no matter how well we know better.)”

In an email to me (and about a million other people), Saunders addressed these people and their profound misunderstanding of the word “freedom.”

“There seems to exist an American personality type that has taken a childhood resistance to being told to eat his or her vegetables and grown it into a political position—the type of person who has a tendency to misunderstand “freedom” as “being allowed to do exactly what I want, perpetually, no matter the effect of this on other people.” That attitude is more correctly called “being a brat” or “perma-juvenilia.” We have to get things up and running, of course; that’s a healthy aspiration and a humane one. But to simply put aside science to do it, out of boredom, is only going to make things worse in the long run, and harder on the working-class people this thing is affecting the most.”

Saunders then goes on to offer a metaphor that, although not perfect, captures the insanity of the people calling for an instant return to normality.

“Imagine a day at the beach. There’s a shark in the water. You say to me, “We’d better stay out of the water.” I agree. We stay out. The shark keeps circling. Then you start to get bored. Suddenly you start making justifications for going in (“It’s so hot! We came here to swim! It’s not right, to have a beach and have nobody swimming!”)

“With the difference, of course, that in real-life, that “shark” is contagious. So I guess the analogy would be: You go in, get eaten, turn into a shark, come out of the water (perhaps asymptomatically, i.e., no bite marks) then eat me and a few other people nearby. (Here my metaphor admittedly gets a little wobbly . . . ) But at least you are still “enjoying your sacred freedom.” And to top off a perfect day at the beach, you open the picnic basket and refuse to eat any and all vegetables in there. Victory! The Founders would be so proud.”

As I write this, the world is celebrating the 75th anniversary of VE Day, the day the Allies defeated the Nazis. My father was in Paris when Germany surrendered. He and the soldiers in his unit had spent the previous month liberating the Buchenwald and Dachau concentration camps, witnessing more horror in a month than anyone should witness in ten lifetimes. I can only imagine the joy and relief he and his fellow soldiers must have felt after six years of war (nearly four for U.S. troops). Their perseverance and dedication won the war and saved the world.

Now, imagine if, after a few months of fighting, they decided to give up. What if they had decided the war was no fun, they were bored, they wanted to go shopping, so they just walked away? Where would we be now, 75 years later? We’d be screwed, that’s where we’d be. And we’d be speaking German.

In his email, Saunders commented on the generation that fought World War II.

“What we admire about the Greatest Generation is the fact that people made very real personal sacrifices, responding to coherent leadership, to fight a very real evil. We can find coherent leadership in the medical professionals and local government officials. Let’s hope we can find the discipline to see this thing through like grown-ups.”

He also imagined what it would have been like if our founding fathers had acted like some are acting today.

“I know we committed to fighting the British and all, General Washington, but these pants are so tight. And just so you know? I am fighting for freedom, by taking these pants off, then going home. My freedom. Because that’s what I want to do! Don’t tread on me!”

Stay home! Stay safe! Be adults! Keep your pants on!