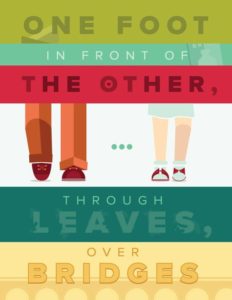 In 1968, Kurt Vonnegut publish a short story collection entitled Welcome to The Monkey House. The most mainstream of the stories, “Long Walk to Forever,” wasn’t his favorite. In fact, he disliked the story and was afraid it would overshadow his other work in the collection.

Vonnegut wrote the story as a sort-of tribute to his relationship with Jane Cox, the woman he pursued and married after returning home from a prisoner of war camp in Dresden, Germany following World War II. The story, which is semi-autobiographical, is about a soldier who goes AWOL to convince, in his own way, a woman to abandon her fiancé and marry him.

“Long Walk to Forever” was originally published in Ladies Home Journal, which only made Vonnegut dislike the story more. In the introduction to the story in Welcome to the Monkey House, Vonnegut wrote:

“In honor of the marriage that worked I include in this collection a sickeningly slick love story from The Ladies Home Journal, God help us, entitled by them “Long Walk to Forever.’ The title I gave it, I think, was “Hell to Get Along With.”

In a New York Times review, critic Michael Levitas didn’t care much for the story either. He wrote:

“This Vonnegut is obviously a lovable fellow. Moreover, he’s right about the story, which is indeed a sickening and slick little nothing about a soldier who goes AWOL in order—How to say it?—to sweep his girl from the steps of the alter into his strong and loving arms.”

Despite the author’s and critic’s disdain for the story, several people have adapted Vonnegut’s story to create short films. It’s amazing how different the interpretations are. The first one is from filmmaker David Seininger and was made in 1996. It remains very close to Vonnegut’s actual story.

The second one comes from director Dale Watts. He moves the story to England, but otherwise makes few changes.

The third film comes from director Travis Jones. He has a much more modern, urban interpretation. He also took the unusual approach of not having any dialogue. Even so, the story still works.

Long Walk To Forever from Travis Jones on Vimeo.

Jordan Bianchi’s interpretation is another unusual one. His film has what I would call “montage dialogue” (I just made up that phrase) to tell the story. I didn’t think it was particularly effective, but you may disagree.

Finally, director Jessica Hester offers a very straight-forward, period appropriate take on Vonnegut’s story. Below is the trailer to her film. You can find the full film here.

One Reply to “Interpreting Kurt Vonnegut’s “Long Walk to Forever””