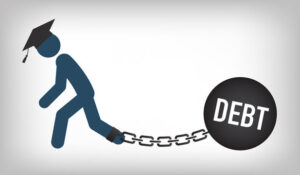 I am saddened, but not surprised, at the number of people who are screaming “It’s not fair” in response to the recent announcement that the government is going to forgive up to $20,000 of student loan debt for select Americans who currently have a student loan. I suspect that most of the people opposed to student loan forgiveness don’t know the history of student loans, and therefore have based their opinions on emotion or misinformation rather than facts.

For instance, my guess is that most people don’t know that when the government introduced guarantees on student loans, banks went into overdrive, often using predatory lending tactics, to make these loans. They saw student loan lending as easy money–a government guaranteed profit center– so they pushed student loans hard.

Most people probably don’t know that when student loans became widely available and the cost of a college education skyrocketed, state legislatures across the nation began cutting support to state schools, transferring the cost of public universities from the state’s taxpayers to 18–22-year-old students looking for a better life. State legislatures saw an easy way to balance their budgets by cutting support to state universities, forcing the universities to raise tuition rates even higher, again increasing the need for student loans and forcing students to borrow ever more money.

During the 1970s and 80s, when student loans became widely available, corporations began requiring a college degree for many jobs, including those where a college degree was arguably unnecessary. With a college degree becoming a prerequisite, anyone that was looking for a career outside the trades or other narrow category of jobs, knew that without a college degree, they were going to be shut out from the most desirable, lucrative employment positions. For those people, getting a college degree appeared to be the best (maybe only) way to get ahead. At least, that’s what we were led to believe by people we trusted, like teachers, school counselors, financial advisors, and others.

“Capitalism would collapse without debt relief systems. Businesses get in trouble all the time—both good businesses that would work fine without a few onerous debt deals, and bad businesses that need to be liquidated or restructured. Sometimes bad things just happen. People get divorced. They get injured and are overwhelmed by medical bills. They get laid off. They have to pay for a parent’s funeral or care for children with special needs. And yeah, some people just don’t know how to manage their money and buy things they can’t afford. But we do not consign such people to never-ending financial servitude as a result of unforeseen circumstances, or even totally reckless spending habits. We have a formal process to eliminate debts and start over, with a reasonable chance of living a healthy financial life.

“But not for students who borrow money to attend college. In 2005, Congress passed a law that made it next to impossible to discharge almost any form of student debt. Even the most creative consumer lawyers estimate that only about $50 billion—less than 3 percent of the $1.75 trillion in outstanding student debt—had the potential to be wiped away, but only if students could persuade a court that they had been egregiously wronged, by say, non-accredited programs or institutions that didn’t actually offer degrees.”

While the charge of unfairness is the way opposition to student loan forgiveness is most often voiced, it totally misses the point. Is it fair that some people had PPP loans forgiven during the pandemic while others didn’t qualify for the loans? Is it fair that profitable corporations receive government subsidies every year? Is it fair that every year, farmers receive subsidies—often encouraging them NOT to plant crops—and most of the money goes to corporate farms?

The point is, every day, the government takes our money in the form of taxes and spends it on any number of programs—including grants, awards, and loan forgiveness—that most of us never qualify for or benefit from directly. That’s what governments do. These programs help run the country and provide benefits to citizens from all across the nation and from numerous walks of life.

To really understand student loan forgiveness, it’s necessary to look at the issue, not through the lens of fairness, but from the viewpoint of right and wrong, or if you’d like, good and bad.

I mentioned earlier the predatory tactics financial institutions used to indebt young borrowers. While it is true that people 18-years old and older can legally sign contracts, it can’t be denied that college age borrowers are inexperienced and unsophisticated when it comes to borrowing money. Financial institutions took (and continue to take) advantage of this situation, encouraging students to take out the maximum loan they qualified for, even if they didn’t need the entire amount to pay for college. I can tell you from first-hand experience that this happened often, including to me.

The right thing to do for borrowers in a predatory lending situation is to forgive their loans. Of course, forgiving loans isn’t enough. Forgiving loans doesn’t fix the system. It doesn’t prevent banks from continuing to take advantage of borrowers. The system needs to be totally revamped. That’s a conversation for another time. For now, it’s enough to recognize that, under the circumstances, forgiving student loan debt is the right thing to do for student loan borrowers.

In addition, it’s a good thing to do for the economy. Right now, many college graduates and those that attended college but did not graduate are failing to fuel the economy the way that was expected. Because of crippling student loan debt, many borrowers are delaying marriage, delaying buying a house, and they are often stuck in unfulfilling jobs they can’t afford to leave due in large part to having to pay student loans. Instead, the money these borrowers spend each month is funneled into one narrow industry (financial services), and not spread across the economy. Discretionary spending for these people is extremely limited, denying the use of this money in the rest of the economy.

One argument that has been made by those opposed to student loan forgiveness is that it will make inflation worse, hurting the economy. This charge is seemingly made by people who don’t fully understand how the forgiveness will work or how many years it will take to forgive the loans.

Someone who does understand the program, is Mike Konczal, Director of Macroeconomic Analysis at the Roosevelt Institute. Konczal analyzed the opinion of the Center for Responsible Budget (CFRB), who claimed that student loan forgiveness will “consume nearly ten years of deficit reduction” that was supposed to come from the Inflation Reduction Act (IRA), and “would wipe out the disinflationary benefits of the IRA.”

Joseph Stiglitz, professor at Columbia University, echo’s this sentiment. “Whatever your view of student-debt cancellation, the inflation argument is a red herring and should not influence policy…A closer look at the student-debt-cancellation program suggests that the new student-loan policy may even reduce inflation; at most, its inflationary impact will be minuscule, and the long-term benefits to the economy are likely to be significant.”

Stiglitz goes on to point out that resuming student loan payments without forgiveness will likely do more harm to the economy than good. “Some of the critics demand that payments should simply resume without any cancellation. That would plunge a large number of student debtors back into immediate financial distress and further loan delinquency…This level of distress is bad for the economy, both in the short run, as we strive for a robust recovery, and in the long run.”

The issue of student loan forgiveness is an emotional one, but for the sake of our citizens and our economy, we should not base government programs on emotion, particularly uninformed emotion. Government programs should be based on the good they can do, the harm they can alleviate, and in the positive impact they can have on citizens and our economy. Basing them purely on a sense of, “I survived this hardship in the past, so you should have to survive it now” is a sure recipe, not only for more hardship, but for potential economic disaster.