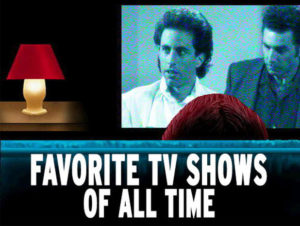 After writing a recent post about Deadwood, I started thinking about my favorite TV shows of all time. I know this is hard to believe, but there was once a world with no Netflix, no Hulu, and no Amazon Prime. And HBO and Showtime were only in their infancy. That’s the world I grew up in. It was a hard scrabble life. As a result, my list may be skewed toward older, network shows. Even so, these were great shows and deserve some recognition.

The flip side of that is that there are a lot of shows I’ve never seen. I never watched The Wire or The Sopranos or Game of Thrones (all on HBO), The Man in the High Castle (Amazon), Shameless (Showtime), Justified (FX) or The West Wing (NBC), all of which I’ve heard are really good. Also, I never really got into Breaking Bad, Better Call Saul, or Mad Men (AMC), The Blacklist (NBC), or The Commish (ABC), which, although highly rated, never really appealed to me.

Having said all of this, here is the list of my favorite twenty TV shows  of all time (with a couple of ties):

To learn more about Hill Street Blues, check out this admittedly low-budget retrospective, Life on the Hill.

One Reply to “My 20 All-Time Favorite TV Shows”