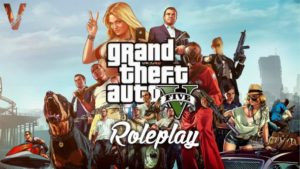 I had an unusual experience last night. But first, some background.

Since I’ve been sheltering in place during the coronavirus pandemic, I’ve started watching iRacing, primarily on Twitch. There is no real racing going on right now (although NASCAR starts back up this weekend), and I’ve been bored. So, I watch other people race virtual cars.

Some of those people I watch—primarily Conor Daly and Lando Norris—also stream themselves playing Call of Duty Modern Warfare. My son is a big Call of Duty fan, and I’ve watched him play in the past, so it seemed only natural for me to watch Conor and Lando.

I’m also a fan of Grand Theft Auto 5 (GTA5). I’ve played the game quite a bit, but I’ve never watched anyone else play it. So, last night, there was no sim racing on and I wasn’t enjoying Call of Duty, so I decided to watch someone play GTA5 on Twitch.

This is where things got weird. The person I was watching was in the GTA5 world, but he really wasn’t playing the game. His character was a police office (who he continually referred to as a LEO—Law Enforcement Officer), and he was on patrol in the online game world. He received police calls from a dispatcher (also a real human being), and he spoke to the dispatcher using police lingo, including 10-codes. He also used a fake southern accent when he spoke as the cop, an accent he definitely didn’t have when he spoke to his viewers on his Twitch stream.

I watched for about 20 minutes (Who is the real weirdo in this scenario?) and almost nothing happened. The player playing the cop received three calls in the 20 minutes I watched, and two of the calls were resolved before he even got to the location. The one call he received that he had to resolve himself was a burglar alarm call. It turned out that an elderly civilian (the cop’s word) set off his own alarm when he forgot his alarm code. There was no crime. No shooting. No arrests. Oh, and the elderly civilian. He was played by a real person too.

These role players routinely inhabit their characters for hours at a time, almost like they are working an actual shift. One guy I was watching was talking about his plans to “work a double shift” of 16 hours this weekend. These people are really committed to their role playing lifestyles.

I spoke to my son about what I had witnessed, and he was familiar with the phenomenon. There are apparently entire communities of like-minded role players who not only take on the roles of cops, dispatchers, civilians, criminals, etc., but they also create their own software and apps to go along with the game.

I want to put a little finer point on this idea of creating add-on software and apps for GTA5. The cop I was watching had a cop car, sirens and lights, police radio system, in-car radar, and supplies in his trunk (including Clorex wipes) that are not part of GTA5. They had to be created by some interested third-party. Like I said, there’s an entire community, including coders and graphic designers, who make this role playing possible.

Discovering this world of role players opened my eyes, yet again, to the fact that, no matter how worldly I think I am, I really live a fairly narrow, naïve life. There is so much going on in the world right now that I I’m completely unaware of.

When I was younger, I believed the everyone was generally good. I thought that the troubled, evil people I saw on TV were just the figment of some writer’s imagination. I didn’t think that these types of people actually existed in the real world. Even as I got older, I still didn’t fully comprehend how different the world could be from what I saw with my own two eyes.

Once, in a fiction writing workshop in grad school, we read the book Once Upon a River by Bonnie Jo Campbell. I thought the book was terrific. In the workshop, I admitted that I liked it very much, but that I had a problem with part of the storyline. In the book, the protagonist, a 15-year old female runaway, sleeps with every adult male who crosses her path, with the exception of an 80-year old gay man. My problem, I explained, was that I didn’t believe that so many adult males would have such low morals as to have sex with a 15-year old.

My professor and several classmates looked at me with a combination of confusion and derision. I don’t think they could believe my naivete. To them, the storyline was completely believable. Their lived experience told them that what the young protagonist went through was not only believable, but expected. My experience, on the other hand, told me that adults simply don’t act this way.

I have to admit that in the intervening years, I have come closer to sharing my professor’s and classmates’ opinions. People are not as good as I thought they were. And in particular, adult males are not as good. This saddens me, but it does open my eyes more to the world as it is, rather than the world that I saw while looking through rose-colored glasses. And, although I’m not happy to learn that the world isn’t the generally good place I thought it was, as a writer, it is good to know the truth, or at least as much of the truth as I can.