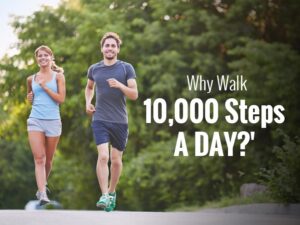 I’m sure you’ve heard it said that for maximum health benefits and weight loss, you should walk 10,000 steps per day. But is that really true? Probably not. In the very least, it’s not based on science.

According to Harvard paleoanthropologist Daniel Lieberman, in his book, Exercised, the 10,000 step myth began as a marketing campaign decades ago in Japan. The originator of the myth, Yamasa Tokei, made pedometers known as “Manpo-kei” (translated as “10,000 step meter”) in the 1960s. The marketing campaign eventually ended, but the underlying message has carried on through the years and across the ocean.

A study conducted at University of Massachusetts-Amherst by epidemiologist Amanda Paluch, had similar, but slightly different findings. The mega-study, which used a compilation of other studies involving more than 50,000 people on four continents, found that adults 60 years and older maximized their mortality benefits at between 6,000 and 8,000 steps. For those less than 60-years of age, the maximum benefit occurred at between 8,000 and 10,000 steps. One important finding in Paluch’s research was that getting more steps over the maximum for each age group (8,000 for those 60 or older, and 10,000 for those younger than 60) did not provide added mortality benefit.

If you’re sedentary or don’t exercise much, adding steps to your daily routine will help you lose weight. A study conducted by researchers from the University of Denver, Wake Forest University, University of North Carolina-Chapel Hill, and the University of Pittsburgh, found that increasing steps from 3500 per day to 10,000 led to weight loss in study participants. That seems to make sense, since burning more calories naturally leads to weight loss.

However, Duke University evolutionary biologist Herman Pontzer has some bad news. His research, which is chronicled in the book Burn: New Research Blows the Lid Off How We Really Burn Calories, Stay Healthy, and Lose Weight,  indicates that while more exercise initially leads to weight loss, the body has a way of adapting, so that when more exercise becomes the norm, weight loss decreases or stops altogether.

Part of Pontzer’s research involved monitoring the number of calories burned by traditional hunter-gathers in Tanzania. The findings surprised even the researcher. The data indicates that the hunter-gathers, who routinely walk several miles each day, didn’t burn significantly more calories than sedentary Americans. The reason? Our bodies tend to budget energy based on expected activity. So, the bodies of the hunter-gathers expected them to walk several miles every day, and budgeted energy accordingly, just as the body of a sedentary adult expects very little movement, so budgets calorie burn based on that expectation.

Pontzer makes the point that exercise is good for us. Progressively increasing exercise levels benefits most people. It’s just not great for weight loss. By contrast, a sedentary lifestyle is not good for our health, even if those who spend way too much time on the couch don’t necessarily gain weight.

The bottom line is that a reasonable number of steps each day—somewhere between 4,400 and 10,000—is good for our health, leading to increased longevity. Even if it doesn’t necessarily lead to weight loss, it’s still a good idea.

If your goal is to lose weight, focus on your diet, not exercise. Research indicates that exercise has limited impact on weight loss, but can significantly increase mortality. Diet, on the other hand, while having some impact on longevity, is the number one tool for weight loss. You might want to keep this in mind as you’re putting together your New Year’s resolutions.