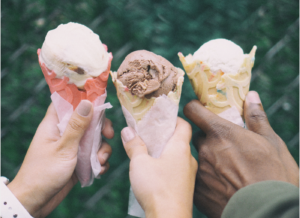 I love ice cream. Ever since I was a kid, ice cream has been my “go to” dessert. My mom usually bought vanilla or French vanilla (I’m convinced we got French vanilla because my mom picked out the wrong carton by mistake), or on rare occasions, Neapolitan, that fancy ice cream with three different flavors in the same carton. It was a simpler time.

A few years ago, I began to open my eyes to various types of ice cream and what made them different. I’m not talking about different flavors. I’m talking about butter fat content, air percentages, creaminess, and base ingredients. There are big differences between various categories of ice cream.

This is by no means a comprehensive dive into all of the different categories of ice cream, but I hope it does provide a basic understanding of what you are eating the next time you scream for ice cream.

Let’s start with the term ice cream. So far in this essay, I’ve used the term incorrectly. For the most part, we in the United States think of the various different categories of frozen desserts as ice cream, but the truth is, ice cream is just one type of frozen dessert.

In days of old, royal courts and wealthy elites would enjoy a dessert known as water ice. This was in the days before refrigeration, so water ice was a rare treat. It consisted of ice and sugar syrup for flavoring, then was whisked, to make the concoction scoopable. It was a simple, yet exotic dessert.

Sorbet descended from water ice, and to this day, contains no milk or cream, so it’s the perfect treat for those with dairy intolerances or vegans. In addition to ice and sugar syrup (a mixture of table sugar and corn syrup), sorbet also is made with fruit juice or fruit puree, and occasionally fruit pieces. Of all the different types of frozen desserts, sorbet has the lightest, iciest texture, and is often used as a palate cleanser rather than a dessert.

Sherbet originated in Turkey and Persia, and was introduced into Europe in the 17th century. By law, Sherbet must contain milk ingredients and milk fat, normally bringing the butterfat content in at about 1-2%. Fruit juice or whole fruit chunks are also normally added, giving sherbet a tart, tangy taste.

Sherbet (as well as sorbet) is normally served at 10 to 22 degrees Fahrenheit, warmer than frozen desserts with a higher butterfat content, because colder temperatures would tend to make sherbet too dense and difficult to eat. The higher temperatures make sherbet much creamier than sorbet.

True to its name, frozen yogurt often has the same live cultures as regular, refrigerated yogurt. Frozen yogurt, also call “Froyo,” is often marketed as a healthier alternative to ice cream or other frozen desserts, since it normally contains around 2-4% butterfat.

Although yogurt has been around for thousands of years, it didn’t enter the dessert category until 1970, when entrepreneur H.P. Hood introduced “frogurt” soft-serve. Capitalizing on consumers’ desire for healthy foods, companies like TCBY took frozen yogurt mainstream in the 1980s.

Flavor-wise, frozen yogurt does have its perks. Tartness makes it one of the best dessert options for frozen berries and fruit flavors. Frozen yogurt ingredients and processing is not stipulated under the Code of Federal Regulations.

Gelato is a frozen dessert made from a mixture of milk, cream, and sweetener. It originated in Italy and is widely sold in Italian shops called “gelaterias” around the country. Gelato means ice cream in Italian and is thought to have been born during the Italian Renaissance in the 14th century.

Two types of gelato were introduced to the United States in the late 1700s: one made by combining water with fruits and the other by mixing milk with cinnamon, chocolate, or different flavors.

While gelato does have a custard base like ice cream, it also contains less milk fat. Both gelato and ice cream contain cream, milk, and sugar, but gelato uses more milk and less cream than ice cream. Gelato contains 4-9% butterfat, while ice cream contains 14-25%. Also, gelato is traditionally served at a slightly warmer temperature (about 7 to 12 degrees Fahrenheit) compared to ice cream, which gives it a bit softer feel and why it looks glossier.

Gelato is churned, very much like caramel, which reduces the air content during freezing, creating a very dense & creamy end product. Unlike other frozen desserts, there are no laws concerning the ingredients or process used to create gelato in the United States. Because of this, products marketed as gelato can vary wildly.

The higher the butterfat content of a frozen dessert, the less chance there is of suffering from brain freeze

America had its first accounted taste of ice cream in the 1740s, according to a letter dated 1744. The dessert went on to impress some of the most recognized figures in American history, including George Washington, who purchased $200 worth of ice cream in 1790, according to the International Dairy Foods Association.

Ice cream’s popularity and accessibility increased as technologies evolved. But as the base of ice cream fans grew, so did the number of fakes. That’s why the government standardized the dessert as part 135.110 in the Food and Drug Administration’s Code of Federal Regulations, which includes stipulations on ingredients, production and composition.

Ice cream is served at the coldest temperature of most frozen desserts, between 6 degrees and 10 degrees Fahrenheit. This affects its flavor, as the cold temperature numbs the taste buds and doesn’t allow intense flavors to come through in ice cream as well as they do in gelato, sherbet, or sorbet. Ice cream is incredibly versatile in flavor and can include anything from caramel to strawberry to pistachio to chocolate.

Soft serve ice cream came about in the 1930s. It was very popular at fairs, carnivals, amusement parks, and even restaurants. But as you probably suspected, there are a couple of differences between soft serve ice cream and regular ice cream.

First, soft serve generally contains less milk fat than its harder, denser counterpart. It also contains more air than regular ice cream, which makes it less dense and less expensive to produce. Otherwise, it has a minimum of 10% butterfat, and like regular ice cream, can often be between 14-25%.

Frozen custard was first seen in France in the middle of the eighteenth century and termed “fromages glacés,” which translates to “cheese ice.” Frozen custard had its commercial debut in the United States in New York City, but really came to prominence in Wisconsin, which is now considered the Custard Capitol of America.

Frozen custard is similar to ice cream in ingredients and flavors, but according to the Code of Federal Regulations part 135.110(f), specifying that it must contain at least 10 percent butterfat (usually 14-25%) and more than 1.4 percent egg yolk by weight of the finished food. Anything less, the dessert cannot be called frozen custard, and instead, it would fall under the ice cream category. The egg lends the custard-like flavor, while also supplying an emulsifier called lecithin. This gives custard its distinct smooth texture compared to ice cream.

Frozen custard has a chewier mouthfeel because of the addition of egg yolks. This thick, creamy and eggy dessert pairs well with flavors and add-ins like caramel, chocolates, cookie dough and peanut butter. And, frozen custard often has a lower overrun percentage than ice cream, meaning it contains less air.

Frozen custard is frozen at 16 to 20 degrees Fahrenheit as it churns through the barrel freezing faster and creating a much smoother product. It is then stored at 18 degrees Fahrenheit, maintaining the soft, dense, and creamy texture until it is served.

Technically, LNIC is ice cream, but it’s made differently. The ingredients are still milk fat, sweeteners, cream, sugar, stabilizers, and eggs. And the butterfat content is still at least 10% by law, and often 14-25%. But rather than churning and freezing, liquid nitrogen is added to the mix to produce the frozen end result.

The process begins by taking a molten mixture of cream, full-cream milk, sugar, and flavoring of your choice and churning it with liquid nitrogen at an exact temperature of -195 degrees Fahrenheit. Due to the well below freezing temperature of the nitrogen, the mixture freezes instantaneously. It is a quick process, but unlike ice cream and gelato, which contain around 30% to 50% air after the churning process, it is essentially air free. This results in a creamy, dense texture.

Part of the allure of LNIC is the showmanship that goes into creating it. Employees of LNIC shops are trained to make a performance out of mixing and freezing the ingredients that go into your cup of goodness.

Here’s what it looks like to create a cup of LNIC, courtesy of LNIC franchise, Chill-N‘: