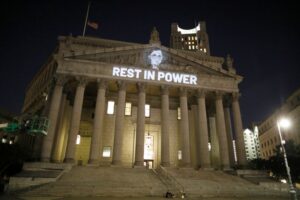 I’d like to add my voice to the chorus of people saying the President should be prohibited from nominating, and the Senate should not be allowed to confirm, a Supreme Court justice to replace Ruth Bader Ginsburg. I’d like to, but I can’t. Here’s why:

The Constitution gives the president the right to nominate candidates to the Supreme Court. It further gives the Senate the duty to confirm or decline that candidate. That’s our system, and there’s nothing in the Constitution or law that indicates any period (i.e. just before an election) when this process is limited or does not apply.

Now, I can hear you screaming, “But what about Merrick Garland?”

For those not familiar with Merrick Garland, he was nominated for the Supreme Court to replace Justice Antonin Scalia by President Obama in 2016. The Republicans, who controlled the majority in the Senate, decided they were not going to hold confirmation hearings on Garland, claiming that it was too close to an election. Majority Leader Mitch McConnell (R-KY) said that the American people should have a say, and with the election just around the corner, the next president should decide who to nominate.

There was no legal reason not to hold confirmation hearings, but it was within the Senate’s rights to withhold their confirmation. Garland’s nomination wasn’t officially declined, but it did eventually expire.

Not holding confirmation hearing caused quite an uproar. Democrats in particular were outraged that McConnell wouldn’t at least hold hearings, but there was little they could do.

When speaking about the Senate’s refusal to take up Garland’s nomination, Republican Senator Lindsey Graham (R-SC) said “I want you to use my words against me. If there’s a Republican president in 2016 and a vacancy occurs in the last year of the first term, you can say Lindsey Graham said let’s let the next president, whoever it might be, make that nomination.”

After the Brett Kavanaugh confirmation hearing, Graham further stated, “I’ll tell you this – this may make you feel better, but I really don’t care – if an opening comes in the last year of President Trump’s term, and the primary process has started, we’ll wait until the next election.”

Several other senators, including Cory Gardner (R-CO), John Cornyn (R-TX), Marco Rubio (R-FL), and Chuck Grassley (R-IA) all went on the record saying the Senate should not hold confirmation hearings for a Supreme Court justice in the lead up to an election.

But within hours of Ruth Bader Ginsburg’s death, McConnell, Graham, Cruz, and several other Senators have chimed in to say that Donald Trump should submit a nominee and the Senate should hold confirmation hearings before the election (or perhaps between the election and the inauguration in January 2021).

So, it’s clear. Republicans are hypocrites. Is that news? Not really. The days of statesmanship and fair dealing have been over for some time with these guys. They are liars and conmen who routinely choose party over country, but they are not abusing their power by holding nomination hearings.

In a more perfect world, Republicans would be true to their word and the commitments they made back in 2016. But that’s not the world we live in.

Will any Republicans show some honor and dignity, and refuse to confirm any nominee until after the election? Maybe. Senators Mitt Romney (R-UT) and Lisa Murkowski (R-AK) have both voiced their reluctance to hold confirmation hearings. Susan Collins (R-ME) might join that group. If no more than three Republicans refuse to confirm Trump’s nominee, the Republicans will still have enough votes to seat another Supreme Court justice.

For Democrats, there is some light at the end of this particular tunnel. In the coming days, I expect Sen Chuck Schumer (D-NY) and others to announce their intention to take the following actions should the Republicans move forward with the confirmation:

In order for this to work for the Democrats, two rather big things have to happen in November:

Both things appear to be doable. Biden is leading in the polls at the moment, and Democrats are likely to pick up several seats in the Senate. Will it be enough to carry out their threat? Only time will tell.

In addition, the filibuster is a long-standing process in the Senate, and members are reluctant to get rid of it. However, Democrats would have to get rid of it in order to prevent Republicans, who in this scenario would be in the minority, from blocking their attempts to enlarge the Supreme Court.

In fact, enlarging the court is something Democrats would rather avoid. Nobody wants to mess with the court for political reasons. That’s just not something either party particularly likes to do. The Supreme Court is supposed to be above politics. But, if the Republicans are willing to play politics with RBGs open seat, then the Democrats would likely be willing to respond in kind.

If Donald Trump is smart (I know this is up for debate), he’ll decide not to submit a nominee. Why would he do that? Think about it. If he wins in November, he’s going to have another four years and will have plenty of time to nominate someone to the Supreme Court after he starts his next term.

On the other hand, if he loses, or if the Senate switches to Democratic control, he’s no worse off than he is now, with a conservative leaning court. Replacing Ginsburg with a liberal justice will only maintain the court’s status quo, not flip it.

Of course, this presupposes that Democrats won’t go forward with their threats if Trump plays nice, but honestly, I think that’s a pretty good bet. The threat the Democrats would be making is distasteful to them. They don’t want to do it, and will likely only follow through with their threat if they are forced to.

I agree with all of those that say the Republicans shouldn’t confirm a candidate this late in Trump’s term, but I understand that they are well within their rights to do so. If Trump nominates a candidate and the Senate holds confirmation hearings, the Democrats will be forced to take aggressive, steps to counter the Republicans, which will be ugly, divisive, and utterly necessary.

There is a way to avoid this possibility, but I honestly don’t think that Trump or the Republicans are capable of doing the smart, right thing when it comes to Supreme Court nominations. They’re like a heroin addict being offered free dope. Even if they can think clearly enough to know taking the dope is a bad idea, they’re craving will override their brain and lead them to take it anyway. And when it comes to the Supreme Court, the Republicans have an insatiable craving.