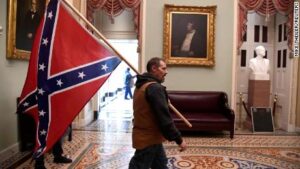 The violent, bloody siege of the Capital on 1/6/21 was the logical conclusion of the big lie Donald Trump has been telling in one form or another since last summer. The big lie, that the election was stolen from him, has been amplified by Republicans and right-wing media incessantly since Trump first broached the subject. The claim was ramped up following the election, and was bolstered first by frivolous lawsuits, then by calls to ignore or replace certified electors from swing states that voted for Biden, and finally by an attempted takeover of our government by extremists who heard the big lie, believed it, then acted on it.

During yesterday’s House impeachment debate, Republicans, one after the other, stepped up to the microphone and continued lying to the American people. They claimed that Trump didn’t incite the crowd and that it wasn’t Trump supporters who stormed the Capitol. They re-hashed arguments from the first impeachment, saying that the Mueller Report exonerated Trump and that it didn’t find any evidence of collusion.

On the way to his speech in Alamo, TX yesterday, Trump told people on Air Force One that he won the election in a landslide. Then this morning, Trump aid, Peter Navarro, told Fox News morning propogandist, Maria Bartiromo, that Donald Trump won the election, and he excused the insurrectionists who took over the Capitol last week, saying that they were simply standing up for election integrity.

Can we just stop with the lies already? Millions of Trump supporters are all ginned up because they think that their chosen candidate had the election stolen away from him. They believe this despite there being no evidence to back up their belief. They believe it despite more than 60 election-related lawsuits that were dismissed for lack of evidence. They believe it despite the Department of Justice and the Department of Homeland Security conducting investigations and both finding there was no evidence of widespread voter fraud.

So, why do they believe the big lie? They believe it because Trump says it, Republicans amplify it, and right-wing media repeats it, over and over again.

The facts are not in dispute. All evidence indicates that the election was free and fair. Chris Krebs, former Director of the Cybersecurity and Infrastructure Security Agency within the Department of Homeland Security, stated that the 2020 presidential election was the fairest and most transparent in our country’s history. That didn’t square with Trump’s position, so he fired Krebs and doubled down on the big lie.

According to Timothy Snyder, history professor at Yale University and expert on authoritarianism, this is how the big lie works:

“The claim that Trump won the election is a Big Lie.

A Big Lie changes reality. To believe it, people must disbelieve their senses, distrust their fellow citizens, and live in a world of faith.

A Big Lie demands conspiracy thinking, since all who doubt it are seen as traitors.

A Big Lie undoes a society, since it divides citizens into believers and unbelievers.

A Big Lie destroys democracy, since people who are convinced that nothing is true but the utterances of their leader ignore voting and its results.

A Big Lie must bring violence, as it has.

A Big Lie can never be told just by one person. Trump is the originator of this Big Lie, but it could never have flourished without his allies on Capitol Hill.

Political futures now depend on this Big Lie. Senators Hawley and Cruz are running for president on the basis of this Big Lie.

There is a cure for the Big Lie. Our elected representatives should tell the truth, without dissimulation, about the results of the 2020 election.

Politicians who do not tell the simple truth perpetuate the Big Lie, further an alternative reality, support conspiracy theories, weaken democracy, and foment violence far worse than that of January 6, 2021.”

We all want unity and healing. Our nation is hurting, and we need to come together to address the many challenging issues we face. But unity can not happen, and healing can not begin, until the people responsible for the attempted coup on our government are brought to justice. They must be held accountable before we can move forward. That accountability starts by telling the truth.

If Republicans’ calls for unity and healing are to carry any weight, they must first accept that the election was free and fair, and that the results are credible and accurate. They must announce this fact to their followers, and they must do it in a way that their followers can hear and accept.

They must denounce the terrorist attack on the Capitol, and they must announce that it was right-wing Trump supporters, not Antifa, that carried out the attack.

They must accept that Trump and many Republicans in Congress shared the big lie and incited the insurrectionists. The only way to undo the horrible damage done by the big lie and all of the lies that were told to support it is to tell the truth.

Telling the truth is just the first step, but it is necessary for other steps to follow. We cannot have a strong democracy and a thriving nation when half the population lives in a fantasy world devoid of verifiable facts and disconnected from reality. They trusted Trump, they trusted Republicans, they trusted right-wing media, and they were fed one lie after another. It’s understandable why they believe what they believe, and it’s logical (although unforgivable) that some acted on the lies they were fed. The only way to de-escalate the situation, to bring us all together, and to move forward as a unified nation is to provide all citizens with a shared reality. That can only happen when the lying stops, and the truth-telling begins.