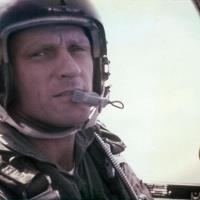 Roy Knight always knew he’d join the military. After all, it was kind of the family business. All five of his older brothers had joined the military before him and had fought in World War II. Roy was too young for the Second Great War, but that didn’t stop him from joining the Air Force just a few days past his seventeenth birthday in 1948.

Roy served in the Philippines, Japan, and Korea before being accepted into Officer Candidate School in 1953. He received his commission later that year, then married Patricia Henderson, who he’d met while in the Philippines.

Life was good for the Knights. Like many military families, they moved around the world, going from Japan to South Korea, then Texas, then Germany, then France. During their travels they started a family. Roy III was born in South Korea. Gayann was born in Texas. And the youngest, Bryan, was born in France.

During his journeys, Roy became a pilot, flying the F-86D fighter jet. In 1963, he was asked to return to his native Texas to become a flight instructor at Laughlin Air Force Base. But even with three kids and a thriving military career, Roy couldn’t sit still. He enrolled in college courses at the University of Omaha and graduated with a bachelors degree in 1966. Later that year, Major Roy Knight received orders for Southeast Asia.

Roy’s mother, wife, and youngest son loaded into a car and headed for Love Field in Dallas on a chilly January day in 1967 to say goodbye to Roy. He was heading to Thailand and they were staying behind in Texas. He hugged his mom and young son, kissed his wife, then headed toward the plane that would take him overseas. It would be the last time he would see his family, and the final time they would ever see him.

Roy reported to the 602nd Fighter Squadron at Udorn Royal Thai Air Force Base, from which he flew combat missions almost daily until May 19, 1967. On that day, Major Knight was shot down over Laos and subsequently reported missing in action. Rescue teams searched for him, but were unsuccessful. Roy lingered on the missing in action list for years, even earning a promotion to colonel while MIA. But in 1974, without finding his remains, Roy was officially listed as killed in action, and was posthumously awarded an Air Force Cross, Silver Star, Distinguished Flying Cross, Purple Heart, and six Air Medals.

By the time he was declared killed in action, both of Roy’s parents had passed away without ever knowing what had happened to their son. Patricia and the kids knew Roy had probably been killed in Southeast Asia, but they never were a hundred percent certain. They all moved on with their lives, growing older, but never receiving any answers about their husband and father. Sadly, Patricia, the love of Roy’s life, passed away in 2008, never knowing her husband’s fate.

Earlier today (8/8/19), a Southwest Airlines jet touched down at Dallas’ Love Field carrying the remains of Col. Roy Knight. The plane taxied under an arching stream of water, a tribute offered by an airport fire truck, before moving on to the terminal. With airport employees surrounding the plane, a flag-draped casket was unloaded from the cargo bay via conveyor and was accepted by an Air Force Honor Guard, who transferred the casket to a waiting hearse.

It was an emotional scene, made even more so, when, on the plane it was announced that the pilot of the Southwest Airlines flight that brought Col. Roy Knight home, was none other than his son, Bryan, who had said goodbye to his father in 1967, fifty-two years ago.

Here’s a video of the plane landing in Dallas and Col. Knight’s coffin being removed by the Honor Guard (Sorry I couldn’t embed it).