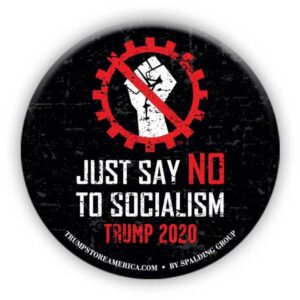 Leading up to the 2020 Presidential Election, I wrote a Facebook post explaining socialism. I was frustrated that so many people labeled almost every proposal they opposed as socialist. It had gotten so bad that TV news interviewers were beginning to question Democratic politicians as if they were socialists.

After making my first post on socialism, I thought of a different way to address the issue, so I wrote a second post on the definition of socialism. I’ve re-printed those posts below in hopes that it will help anyone who reads them better understand that not everything called socialist is actually socialist.

WHAT IS SOCIALISM (Part 1)

If you Google “What is socialism?” this is the answer you get:

“Socialism is a political, social and economic philosophy encompassing a range of economic and social systems characterized by social ownership of the means of production and workers’ self-management of enterprises. It includes the political theories and movements associated with such systems. Social ownership can be public, collective, cooperative or of equity. While no single definition encapsulates many types of socialism, social ownership is the one common element.”

The reason I ask the question is because it seems a lot of people don’t know the answer. When discussing Medicare for All or extending public education through college or universal basic income (UBI), people opposed to such programs will often voice their opposition by calling the programs “socialist.” But are they really?

Compare the programs listed to the definition of socialism. Do any of the programs involve “social ownership of the means of production and workers’ self-management of enterprises?” The answer is “No.”

Take Medicare for All as an example. The same businesses that own the hospitals today will continue to own the hospitals, the same doctors will treat the patients, the same companies will produce the medical instruments and medicines. Unlike the Veterans Administration, in which the government owns the facilities and employs the doctors, nurses, and other staff, Medicare for All is simply a way of paying for healthcare. It removes the profit incentive of and government subsidies for private health insurance companies, but it doesn’t take ownership of those companies.

What about extending public education through college. If public K-12 isn’t socialism, how can extending it four additional years be socialism? It doesn’t involve taking over ownership of an industry (public schools exist alongside private schools) or having workers self-management of the enterprise. Again, not socialism.

Does UBI meet the definition of socialism? I’m not sure how it could. There is no social ownership of the means of production, no workers’ self-management of enterprises. Verdict: UBI is not socialist.

Programs many people term “socialist” are really just proposals designed to help citizens, paid for using taxpayer funding. That’s not socialist. Everything our government does, from the military to social security to the courts to the EPA, and everything in between, is paid for with taxpayer funding. It’s virtually the only way the government can pay for anything.

There may be reasons that people—conservatives in particular—can’t support these programs. I think they might be surprised to learn that there are good conservative arguments to support all three. That’s a discussion for another day. For today, I just want to make it clear that the programs that are being labeled as socialist actually aren’t socialist at all.

If you’re opposed to these or any other policy proposals, explain your opposition. But please, don’t label them as socialist. They’re not, and doing so does more to reveal your lack of understanding than it does to describe the proposal.

WHAT IS SOCIALISM (Part 2)

Yesterday, golfing legend Jack Nicklaus endorsed President Trump. This is not surprising. Nicklaus and Trump are friendly, and the golfer endorsed Trump in 2016 as well. In his statement endorsing the President, Nicklaus said that a Trump victory will prevent a “a socialist America and have the government run your life.”

Just a couple of nights earlier, CBS News reporter Norah O’Donnell, while interviewing vice-presidential candidate, Senator Kamala Harris, asked the Senator if she would bring a “socialist or progressive perspective” to the White House.

If you’ve watched TV at all in the past couple of weeks, you’ve probably seen Trump campaign commercials referring to the Biden/Harris ticket and their “socialist agenda.” Trump further warns during his rallies that Joe Biden is just a trojan horse for Harris and her “socialist allies” in Congress.

All of these instances reveal America’s enduring ignorance of socialism as a political philosophy. In an earlier post, I detailed the necessary elements of socialism, but let me go over that again quickly here:

“Socialism is a political, social and economic philosophy encompassing a range of economic and social systems characterized by social ownership of the means of production and workers’ self-management of enterprises. It includes the political theories and movements associated with such systems. Social ownership can be public, collective, cooperative or of equity. While no single definition encapsulates many types of socialism, social ownership is the one common element.”

For more than a century, Americans have feared the introduction of socialism into our system. The closest we ever came to electing a socialist leader was in the 1912 presidential election, when Eugene V. Dabs, an openly socialist candidate, won 6% of the vote. Not exactly a popular uprising. And to be fair, although Dabs was a self-proclaimed socialist, even he didn’t advocate for the government to take over the means of production in any industry.

Despite their never being a real threat of socialism grabbing a foothold in the United States, Americans have remained obsessed with the idea that socialism hides behind every progressive idea, which has allowed candidates from both parties to weaponize the word “socialism,” swinging it like a sword, while rendering it meaningless.

After the Civil War, in the 1870s, politicians warned that giving the vote to blacks was just a step on the road to socialism. They claimed that blacks, most of whom struggled through poverty, would vote for candidates who promised to give them money from the public coffers. This money could only be raised through property taxes, and property owners were almost exclusively whites. Politicians claimed this was a form of wealth redistribution, and called it socialism. But it wasn’t socialism then, and it isn’t socialism now.

As an aside, throughout American history, this idea that wealth redistribution equals “socialism” oddly only goes in one direction. When the government takes taxpayer money and gives it to corporations, no one yells “socialism.” When the administration in power changes the tax laws to benefit the wealthy, allowing them to pay less than their fair share in taxes, no one makes the charge that it is “creeping socialism.” They only cry “socialism” when the program or proposal benefits ordinary Americans.

Perhaps the most famous charge of “socialism” came after the Great Depression when FDR proposed New Deal legislation. Opponents cried “socialism” for every New Deal program, including Social Security, price supports for farmers, labor rights, public power (like the TVA), and FDIC insurance on bank accounts. In defending these programs, President Truman said “Socialism is their (conservatives) name for almost anything that helps all the people…(it’s) a scare word they have hurled at every advance the people have made in the last 20 years.”

Eisenhower himself was charged with the sin of socialism when he proposed the interstate highway system. Critics referred to the proposal as “creeping socialism” and said it was a slippery slope to removing authority and responsibility from the states.

In later years, conservatives railed against the introduction of Medicare, the Civil Rights Act of 1964, and LBJ’s Great Society legislation. It’s somewhat ironic that when Trump—who accuses Biden of being a socialist—promises to protect Medicare, Social Security, and the ACA’s mandate to waive pre-existing conditions, he’s promising to protect programs that were once themselves called socialist programs.

The fact is, none of these programs are socialistic, nor is Medicare for All, expanding public education to college, universal basic income, nor the “Green New Deal.” They are progressive to be sure, but progressivism is not the same as socialism. In fact, progressivism is a capitalistic, democratic construct. These type of progressive programs seem far-left in the United States, but in Europe, they would be center-left, barely liberal at all.

We in the United States need to get over this idea that any proposal designed to help middle- and lower-class citizens is socialistic. These proposals are very much in keeping with our democratic ideals and traditions. There is nothing about democracy that says legislation can’t help ordinary citizens. In fact, that’s what democracy is all about.

So, the next time you hear the word “socialism” being lazily throw around to describe a proposal the speaker doesn’t like, just remember that socialism requires social ownership of the means of production. If the proposal doesn’t require that, then it isn’t socialism.

And continue to enjoy the interstate highway system, FDIC insurance on your bank accounts, Medicare, Social Security, and any number of other programs we take for granted in 2020. They didn’t usher in socialism to America once they became law, and neither will new proposals conservatives brand with that scary “S” word.