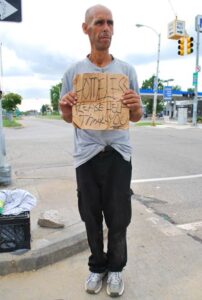 Let’s call him Ryan. Truth is, I don’t know his real name. He was sitting on a median at a Florida intersection dressed in shorts and a threadbare T-shirt. He had a backpack sitting next to him, and he was holding a small sign, too small for everything he had written on it. The only word I could make out was “Homeless.” The rest was a mystery.

Ryan had short-cropped hair that looked like it had been cut by a non-professional, several days growth of beard, and a bearing that suggested defeat. He sat slumped over, with his head down, staring at his shoes, his feet tapping to a beat only he could hear. His sign was asking for help, but his body gave the impression that he had already given up.

I’d seen Ryan a few days earlier at the same intersection. On that day, the traffic signal turned green as I approached, so I only saw him for a moment. I’m ashamed to admit that my first thought when I saw him was, He’s a young, able-bodied guy. Why doesn’t he get a job instead of just begging?

The reason I’m ashamed of having that thought is that I always try to remember that you never know what people are going through, what hardships they’ve suffered or challenges they’ve faced. You truly never know. It’s easy to judge people. It’s harder to understand them and give them the benefit of the doubt. On that day, I took the easy way.

The second time I saw him, I had a red light, so I stopped a couple of cars back from Ryan. My heart was in a different place when I looked at him. I had no idea what his story was, but I was fairly certain it wasn’t a happy one. I waited for him to look up, but he just kept staring at his feet. I rolled the window down, and the heat rushed in. The day was oppressively hot, the sky devoid of clouds.

“Hey,” I yelled. I wanted to sound friendly, but be loud enough so he could hear me.

He stood, then walked toward me. Ryan was thin, his clothes baggy. His shorts, which hung below his knees, were dirty, and his T-shirt sweat-stained.

“How are you?” I asked, holding the money out to him.

He took off his sunglasses and stared at the $20 bill for a moment. His eyes brightened. A smile spread across his face revealing a couple of spaces where teeth used to be.

“Oh man, thanks. Thank you so much.” His voice was gruff, gravely, and he had a noticeable southern accent.

His eyes weren’t quite right. They didn’t move in unison. Was he mentally ill? Did he have some sort of disability?

“This is great. Now I can get something to eat.” He was visibly excited. I wondered when he had last eaten.

The light turned green and traffic started to move. “Have a good day,” I said.

“Yeah, you too, man. Thank you.” Ryan looked again at the money, then stuffed it into his backpack. As I pulled away, he grabbed his sign and hoisted his backpack onto his shoulder, then walked toward the nearby Burger King.

“You never know,” I reminded myself. “You just never know.”