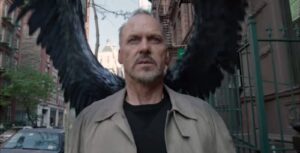 In 2015, the Oscar for Best Picture went to Birdman, a strange film that garnered critical acclaim, but left a lot of people scratching their heads. The film was about an actor who had become famous playing a movie superhero. The actor, played brilliantly by Michael Keaton, felt he had more to offer than just being a a guy in a mask. He wanted to be known as a serious actor, and he set out to prove his worth by starring in a stage adaptation of Raymond Carver’s short story, “What We Talk About When We Talk About Love.”

BIrdman was popular with a certain crowd. I’ll call them the “literary crowd,” and I include myself as a member. I liked Birdman. But I have to admit, as movies go, it was a little bizarre. I saw the film with my then 16-year old son, and he didn’t like it at all. I understood his dislike for the film, even though I didn’t feel the same way.

After seeing Birdman, we got into a conversation about Raymond Carver. My son wasn’t familiar with him and had no idea what the “What We Talk About When We Talk About Love” play in the movie was supposed to be about. That made me a little sad. Raymond Carver is perhaps the greatest American short story writer in history. He revolutionized short stories in the United States and should be better known outside of literary circles.

Author Sara Jane Gilman, writing for NPR, had this to say about Carver:

“Confession. The first time I read a Raymond Carver story, I didn’t get it. It was so spare, so lacking epiphany. I thought: “Huh?”

“But then, I read his story, “A Small, Good Thing.” And “Cathedral” and “Neighbors.” I read his collection, Where I’m Calling From. And then, I got it. Carver’s stories are gritty, unadorned tales of ordinary people. Their very simplicity and elegance gives them a deep, emotional punch. This is why Carver has been extolled as a master of “minimalism.”

I think a lot of people who read Carver feel the same way as Gilman. His writing is different from what we are used to. His descriptions are lacking, albeit adequate. His action is often truncated. His prose unadorned. His stories sparse and simple. His characters gritty and real. Carver gets to the point without a lot of fluff or fanfare. Yet, his stories hit their target with masterful precision.

Here is a rare video of Carver reading his classic short story, “What We Talk About When We Talk About Love.” Listen closely to the story. I think you’ll like it.

(Right after I posted the video, it was removed from Youtube. What’s up with that? In any case, here is A Poetry Channel reading “What We Talk About When We Talk About Love.”)