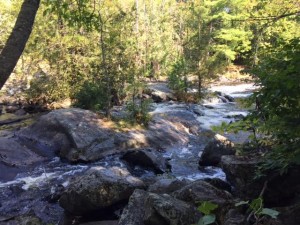 If you’ve read the novella Lake of the Falls (and if you haven’t, what possible excuse could you have?), you know that the falls at Lake of the Falls County Park in Mercer, Wisconsin play an important role in the story. In the book, Kevin and his father, and later, Kevin and Annie, spend time at the falls where they find clarity to the issues they are struggling with in their lives (I hope that wasn’t too much of a spoiler).

In September, I had the opportunity to go up to Mercer to explore one of my favorite places in the world, and spend some time at the falls. It didn’t disappoint.

The day I visited was a little overcast as I turned off Highway 51 onto County FF toward the park. I drove past Crystal Lake where Kevin grew up, and down the twisty, turning road lined with tall, thin pines. The park was quiet, and I was the only person at the falls. I walked along the bank and took a few photos. The leaves had not changed colors as much as I had hoped. I was told they were a couple of weeks behind schedule due to a bit of a drought over the preceding few months. Even so, the place was spectacular. 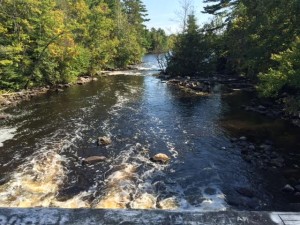 I went up on the snowmobile bridge and stood looking over the falls and downstream at the Turtle River, just as Kevin did in the book. The mixture of the crisp fall air, the smell of nature, and the sound of the falls was a feast for the senses. Being there transported me back to when I was a kid, when we used to hang out at the park. It was a much different place then, much more rustic. But the feelings were the same. As I stood near the falling water, I felt a sense of peace and contentment, even as my soul was energized. The falls are a very special place. 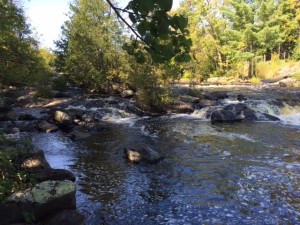 While I was in town, I learned that the cabin on Crystal Lake I based Kevin’s cabin on in the book is for sale. If you’d like to start a GoFund me campaign to raise the funds needed to buy the cabin for me, I will not stand in your way. In return, I will spend my summers in the cabin, and will thoroughly enjoy my time at the lake. If you could raise about $250,000, that should be enough to buy the cabin and pay closing costs. Thanks in advance. 😉