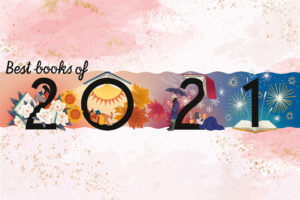 In a lot of different ways, this past year was an odd one for me. One way it was odd was in the books I read. I read fewer works of fiction in 2021 than I have in several years. Instead, I found myself reading a lot of nonfiction. Part of the reason for this is the political times we are living in. There’s so much going on, and it takes time and effort to understand it all. Also, I’ve been working on a project that required reading a lot of nonfiction books. I enjoy most of the nonfiction books I read, but I miss spending more time with fiction.

Despite not reading a lot of fiction, I did read several really terrific works of fiction. In fact, I read one book this year that might be the most well written book I’ve ever read. Trust me, that’s saying a lot.

Once again this year, I had trouble deciding what kind of “books” to include in my list. I decided to include traditional books in print as well as audio-only books and Audible Original “Words & Music” books, which are audio books about musicians which include music. I didn’t include limited series podcasts, which are basically books split up into segments.

I also decided not to include audio lecturers, such as those in the Great Courses series. I’ve listened to dozens of these audio lectures over the years, mostly dealing with various religions, history, and biographies. This year, I listened to a history of the Supreme Court. They’re almost always terrific. Even so, I’ve decided not to include them in my top ten list. I’m not sure I can defend the decision to exclude these limited series podcasts or Great Courses audio lectures, but at least for this year, I’m not including them.

With these caveats out of the way, here are the ten best books I read in 2021: 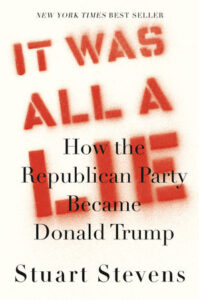 10. It Was All a Lie by Stuart Stevens – Author Stuart Stevens is a former Republican political consultant who became disillusioned with the Republican party following the election of Donald Trump to the presidency in 2016. Over the next few years, Stevens watched the Republicans become a political party he no longer recognized. They did things and said things with Trump in the White House that were contrary to the values—the American values—he thought the Republican Party stood for. And, as the title suggests, Stevens came to the conclusion that all of the things the Republicans said they stood for before Trump were nothing more than lies. The book is a stark rebuke of Republican politicians and the Republican Party, including candidates that Stevens worked for and, in some cases, helped elect. Personally, I don’t buy everything Stevens says in the book. I knew too many Republicans who truly believed what they were saying and what they were working for prior to 2016. Even so, Stevens makes a strong case that Republicans weren’t practicing much of what they were preaching. And its clear that in some instances, many Republican politicians were simply ambitious opportunists who changed their tune in order to ride Trump’s coattails and take advantage of his base. 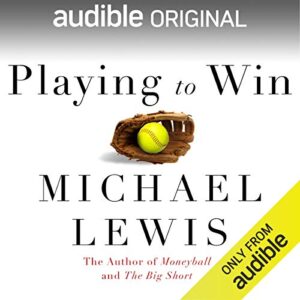 9. Playing to Win by Michael Lewis – If there’s a better nonfiction writer than Michael Lewis, I don’t know who it is. Lewis, the writer of such classics as The Blindside and Moneyball, never fails to impress. Playing to Win, while a smaller, more personal book, is no exception. In the book, Lewis chronicles the extent parents go to to prepare their kids for big-time college athletics. From running kids around for travel ball teams to attending expensive, high-pressure camps, to hiring private coaches, Lewis details the grind on both parents and players, and he does it using his own daughter, Dixie, who is a talented softball player, as an example. Lewis took a rather mundane story, something a lot of people experience, and turned it into an interesting read with characters that we come to really care about. That’s what a good writer does. Sadly, just a few months after reading Lewis’ book, his daughter, Dixie, was killed in a car accident. 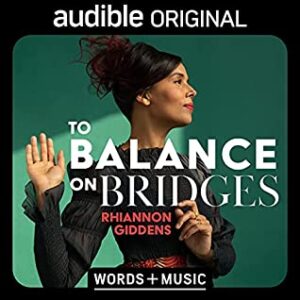 8. To Balance on Bridges by Rhiannon Giddens and The Moment in 1965 When Rock ‘n Roll Became Art by Steve Earle – Both of these books are part of Audible Originals “Words & Music” series. In To Balance on Bridges, Giddens talks about growing up in North Carolina, the daughter of a black mother and white father, about how her parent’s different cultures influenced her musical tastes, about her time in the Carolina Chocolate Drops bluegrass band, and about her partnership, in both music and in life, with Francesco Turrisi. Steve Earle takes the reader (listener) on a journey through his, at times, chaotic life, growing up in Texas, living as a singer-songwriter in Nashville, and ending up in New York City. In particular, Earle discusses the world in 1965 and how it impacted his life and his music. For music lovers, and lovers of great stories, I highly recommend both books. 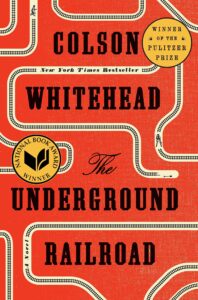 6. The Devil May Dance by Jake Tapper – Did you know that Jake Tapper, CNN anchor and host of “State of the Union” is an author? This past year, I had the opportunity to read both of his books of fiction, The Devil May Dance, as well as The Hellfire Club. Of the two, I thought his second novel, The Devil May Dance, was the better read. In Tapper’s book, Congressman Charlie Marder, along with his wife, Margaret, go to California at the behest of Attorney General Robert F. Kennedy, to look into a potential threat, not only against the president, but against the security of the United States. In the process, the couple endears themselves to Frank Sinatra, and become honorary members of the Rat Pack. But does Sinatra have a connection to the threat the Congressman and his wife are there to investigate? Through plenty of twists and turns and famous faces, Charlie and Margaret get ever closer to the truth, but will it cost them their reputations, or even their lives? 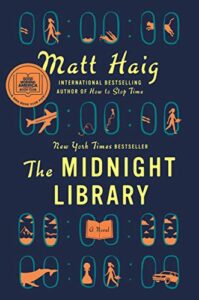 5. The Midnight Library by Matt Haig – Every decision we make has an impact on the direction of our lives. Imagine if there was a place, a library out on the edge of the universe, where there were books that chronicled every decision we make, and tells the story of how our lives would have been changed if we had made a different decision. This is the concept behind The Midnight Library. Protagonist Nora Seed, existing somewhere between life and death, has access to the Midnight Library. She must decide if she should change her life by changing her career, her relationships, her dreams, and her desires. By making these changes—or not—Nora learns what makes life worth living.

4. Falling by T.J. Newman – Imagine you’re a pilot of a commercial airliner. As you take off from Los Angeles enroute to New York, you learn that your family has been kidnapped and the only way to save them is to crash your plane, killing all one-hundred-forty-three souls onboard. There’s one person on your plane aiding the kidnapper, but you don’t know who it is. If you don’t crash the plane, your family will die. If you do crash the plane, you’ll die along with everyone else on the plane. What would you do? That’s the conceit behind Falling, a suspenseful thriller by debut novelist and former flight attendant, T.J. Newman. The plot is fast-paced, and at times, a little unbelievable, but Newman pulls it off. Warning: I would suggest not reading this book on an airplane. 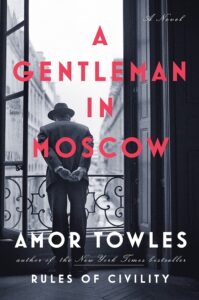 3. A Gentleman in Moscow by Amor Towles – A Gentleman in Moscow may be the most well written novel I have ever read. That’s not just hyperbole. The writing is beautiful. So, why isn’t A Gentleman in Moscow the number one book of the year? Fair question. The problem with the book is that, while the writing is spectacular, the plot is just so-so. A more cynical critic might say A Gentleman in Moscow is the epitome of literary fiction. I’m not that cynical, but I’d understand the criticism. The book tells the story of Count Alexander Rostov, an aristocrat in Moscow just after the Bolshevik Revolution. Rostov is deemed unrepentant by a government tribunal and sentenced to house arrest at the hotel across the street from the Kremlin that he calls home. He is exiled to a small room on one of the upper, less desirable floors in the hotel where he establishes a routine for himself. Rostov loses the freedom he once enjoyed in the outside world, but his confinement in the hotel opens up a world of emotional discovery and freedom previously unknown by the Count. 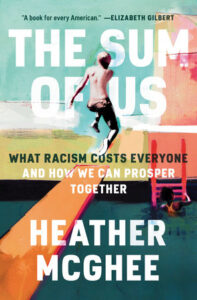 2. The Sum of Us by Heather McGee – This is from the description of The Sum of Us: “Heather McGhee’s specialty is the American economy–and the mystery of why it so often fails the American public. From the financial crisis to rising student debt to collapsing public infrastructure, she found a common root problem: racism. But not just in the most obvious indignities for people of color. Racism has costs for white people, too. It is the common denominator of our most vexing public problems, the core dysfunction of our democracy and constitutive of the spiritual and moral crises that grip us all. But how did this happen? And is there a way out?” I couldn’t have said it better myself (That’s why I quoted so liberally). If you want to really understand how racism effects people of color, and how often, it also effects lower- and middle-class whites, you need to read The Sum of Us. It was the best nonfiction book I read this year, and one of the most impactful books I’ve ever read. 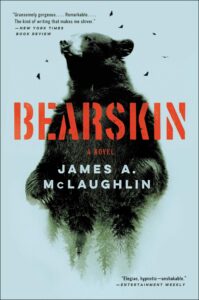 1. Bearskin by James A McLaughlin – This book was a real surprise to me. I’m not sure where I even heard about it, but when I first cracked open the book, I wasn’t expecting much. From the first chapter of the book, I was hooked. I like this kind of surprise. The book tells the story of Rice Moore, a former drug smuggler who thinks he’s put his troubled life behind him. He moves to Virginia to take over caretaker duties at a remote private forest preserve, owned by a mysterious and eclectic widow. But Rice doesn’t know what he’s gotten himself into. When bears begin turning up dead in the preserve, Rice stumbles into a world of poaching, with a dose of rape and murder thrown in. Rice fights back against the poachers. But by fighting back, he runs the risk of revealing his whereabouts to the drug smugglers he worked for–and stole from–who are still looking for him.