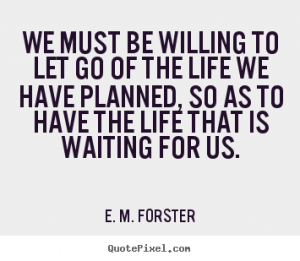 Back in January, I laid out my plans for the year, listing month-by-month what I intended to do from a writing and publishing perspective. For the first three months of the year, this is what I had on my agenda:

Good news! During the first quarter of the year, I accomplished everything I set out to do. I pushed things to the limit, publishing Road Stories on the final day of February (Thank God for leap year!), and Promised Land on the final day of March. Even so, I’ll count this as a success.

I’ve gotten really good feedback on both Back on the Road and Road Stories. Promised Land was just published last week, but I’ve already heard from a few people who bought the book and really liked it. This is all good news. I made a plan for the first three months of 2016 and I stuck to it. That’s about to change.

My plan for the next three months was to publish A Good Life in April, and my first novel, Driven, in June. That’s not going to happen. A Good Life has been a difficult story for me to get right. I’ve worked on it on and off for the past couple of years, and it’s just not coming together the way I would like. I have some ideas to make it better, but that’s not going to happen for a while. As a result, I won’t be publishing A Good Life (or anything else) this month.

Driven is coming together, but I’m not certain it’s going to be ready in June. That’s still the goal, but I wouldn’t bet on it.

Not sticking to my original plan bothers me, but not too much. I’m a big believer in getting the book written and out to the readers, but I also know that if I want to put out the best books I’m capable of, I need to give the writing process the time it needs.

So for the next three months, I’ll be concentrating on finishing Driven. I’ll spend whatever time it takes to make it the best book it can be. And if I can get the book done and ready to be published by June, I will. If it takes more time, then I’ll invest more time. I just want to write a really good book.

At some point, I’ll revisit A Good Life, but for now, it’s going on the back burner. When the time is right, I’ll pick it up again. Until then, it’s time to work on Driven.