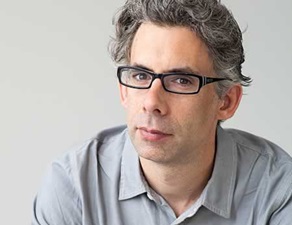 Bret Anthony Johnston is one of my favorite writers. He is a former competitive skateboarder from Corpus Christi, Texas who went on to become the director of the creative writing program at Harvard. The reason I’m so attracted to his writing is because it tends to be sparse while still being detailed and evocative. Normally, that would be a contradiction, but in Bret’s writing, it’s not.

A couple of years ago, I studied with Bret as part of the Summer Writing Festival at the University of Iowa. One of the things I liked about him was his no nonsense approach to writing. A lot of writers—especially literary writers—treat writing like it’s something beyond our comprehension. It’s part imagination, part magic, part inspiration, and it’s all controlled by the muse. Bret pretty much blew that approach out of the water. His philosophy was that good writing had much more to do with hard work and time in the chair than it did with magic and inspiration. I tend to agree.

I wanted to share three of Bret’s short stories with you. The first is “Dixon.” There are two reasons that this story resonates with me. First, it shows a glimpse into Bret’s creative mind. He takes something relatively mundane (kid’s meals toys from Dairy Queen) and builds a complicated, yet easily understood, story out of seemingly nothing. I like that because I think that’s what our lives are like, mundane moments that, when taken together, become something much more. The old saw, “the sum of the whole is greater than its parts” definitely applies here.

I also like the way Bret uses place in the story. In fact, place is always important to me, and Bret does a great job of using his former south Texas home as a background character in the story. Much of Bret’s writing takes place in south Texas, and it’s obvious that he knows the place like a family member.

The second story is “To a Good Home.” Bret usually doesn’t get too political in his stories, and this one isn’t purely political, but it will make you question your preconceptions. I know it did for me. I’m not sure how I feel about the ending. I wanted more. More information? More resolution? Something. But maybe that desire for more is what a good ending does. If Bret was writing a mystery, this ending wouldn’t work well at all. But for literary fiction, maybe it does.

Finally, my favorite Bret Anthony Johnston short story is “Republican.” This was the very first story from Bret I ever read, and it remains my favorite. There’s a sense of humor in this story that I really connect to. It’s not a humorous story, but there’s humor in it. I just really like it.

Enjoy these stories and let me know what you think.

If you didn’t catch the links to the stories above, here they are again: