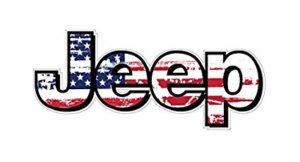 I hate to spew my personal issues on this blog. I started it to talk about my writing and to share stories I find interesting or inspiring. But as it turns out, people like it when I complain. We all have issues we’re dealing with in our lives, and as the old saying goes, misery loves company. So, for those that enjoy my complaining, I have a real treat for you. My next two posts will be nothing but complaining. Ready? Here goes.

I own a 2016 Jeep Grand Cherokee. Since I bought it, it’s been a pretty good vehicle. There are a couple of things that bother me about it, but overall, I’ve been happy with it.

Two Fridays ago, I was getting ready to go on a week-long road trip. When I started the vehicle (It’s an SUV, so do you call it a car or a truck?), the radio screen on the dash had a pop-up indicating that my UConnect software needed to be updated. The pop-up detailed the updating process. I followed it, but it didn’t work. And because it didn’t work, I couldn’t use my radio or the vehicle’s blue-tooth capabilities for the first part of my trip.

I tried to download the software a couple more times, but it still didn’t work. When I got to my destination in Wisconsin, I went to a Jeep dealer. The service writer and manager were both very nice and tried to be helpful, but there wasn’t much they could do. However, the service manager did find something called a Star Case, which is apparently a way that Chrysler/Dodge/Jeep dealers are notified of ways to fix unusual problems that spring up on their vehicles. Kevin, the service manager, went over the software update process detailed in the Star Case, but again, it didn’t work.

A week went by, and I returned to Florida. I called a local Jeep dealer and was told my problem was with UConnect. The service writer gave me their toll-free number and told me I would have to call them. She said they didn’t know what to do about UConnect problems.

Okay, let’s stop for a second and think about that. Jeep dealers sell Jeep vehicles, but what the service writer was telling me was that they could not fix—actually, did not know how to fix—problems with the computer software in the vehicle that they sell. As it turns out, she was wrong (I’ll get to that in a minute), but can you imagine anyone at a Jeep dealer actually believing that they couldn’t fix something on a Jeep vehicle? It boggles the mind.

I didn’t know any better, so I called UConnect. The first woman I spoke to was very nice. She walked me through the steps I needed to download the software. But, of course, it didn’t work.

Let me take another time-out to explain something. The pop-up on the radio screen explains how to download the new software. You just schedule the download (it has to be when you’re not using the vehicle), and you should be good to go. Except, you’re not.

The Star Case that the dealer in Wisconsin shared with me had completely different instructions. In fact, they were so complicated that there was no way anyone could have figured them out on their own. And again, they didn’t work.

When I called UConnect, the nice woman I spoke to walked me through yet another process to download the software. The only thing it had in common with the first two processes was that it didn’t work either.

So, I called UConnect again and told them that the process they had me try didn’t work. I spoke to Alexander and he told me that I should take the vehicle to a dealer. I informed him that I had already taken it to one dealer in Wisconsin, and that I had spoken to a dealer in Florida who said they didn’t know what to do and had sent me to UConnect.

After my phone call with Alexander, I called the dealership again and told the service writer what I had found out. She seemed confused that my issue was being put back on my plate, and said she would talk to her manager, then call me back.

Twenty-four hours later, I still hadn’t heard from the UConnect specialist or the dealership. I called the dealership and again and again spoke to the same service writer. She did not apologize for not calling me back. However, she did inform me that UConnect never called her (Welcome to the club!). She put me on hold so she could talk to her manager, and when she came back on the line, she said that she could make an appointment for me to bring the vehicle in. She said they still didn’t know what to do about the software update, but they would look into it. That really didn’t inspire a lot of confidence that the problem would be solved, but it was my best option.

I called UConnect and mentioned that a specialist was supposed to call me, but that I hadn’t received a call. The rep (or whatever the person who answers the phones at UConnect is called) said it can take one or two business days for a specialist to call. When I complained, saying that the person I spoke to the previous day hadn’t said there might be a day or two delay, the rep offered to have a specialist call me. Although that didn’t make me happy, I had to appreciate the circular nature of the rep’s reasoning. After a little more complaining, the rep said a specialist would call me right back. And best of all, I wouldn’t have to wait a day or two. I was being sent to the front of the line.

My reward for dancing to the UConnect shuffle was to receive a call from Stephanie, who identified herself as a case manager. I don’t know how many levels they have at UConnect, but I think they could save some money by flattening their organizational hierarchy.

Stephanie got right to the point. She explained that specialists do not call customers or dealerships, and then told me that I should be working directly with my Jeep dealer. Based on the things she was saying, Stephanie didn’t seem to have a grasp of what had previously happened in my case. She also didn’t seem to care. I tried to explain what had happen before she became involved, but she wouldn’t listen. She constantly interrupted me and made statements that ignored what I had just told her. I finally asked her to stop interrupting me and allow me to finish my thought. Her response? She hung up.

I get as frustrated as anyone when things don’t go right, but I understand that processes and systems don’t always work the way they’re supposed to. What I don’t understand, and cannot tolerate, is when a person in a customer service position (Isn’t that pretty much everyone), refuses to listen, is rude, and simply doesn’t care to help the customer. There’s no excuse for it. So, I called UConnect back to voice my displeasure.

This time I spoke to Alex. I don’t think Alex and Alexander are the same person, but they could be. In any case, I explained my experience with Stephanie and asked if I could speak to her supervisor. He explained that he couldn’t do that, but he could take a complaint. I asked what would happen after I filed a complaint? Would somebody call me to discuss it? Would anybody care? He said he wasn’t sure what would happen to the complaint after he sent it in. At least he was being honest.

I gave him the information he needed, and I asked him to please include in the complaint that I would like Stephanie’s supervisor to contact me. Then, without me asking, Alex asked me to hold the line and he would try to connect me to a UConnect Consultant.

Alex was showing concern and initiative. Hooray, Alex! I wasn’t sure what a UConnect Consultant was, but I was willing to share my tale of woe with anyone that would listen. I had to hold for about ten minutes, but my patience was rewarded when Jasmine came on the line.

Jasmine did a tremendous job of listening to my story, responding appropriately, and setting my expectations for the future. We spoke for a long time, but throughout, Jasmine was professional and knowledgeable. She was also very concerned about my interaction with Stephanie. I told her that I felt I deserved a call from Stephanie to apologize for her behavior toward me. In a professional way, Jasmine said that probably wouldn’t happen, but she did promise to send the information to Stephanie’s boss so s/he could meet with Stephanie to work on her deficiencies.

My conversation with Jasmine was great. Even so, as soon as the dealership handles the software issue, I’m getting rid of my Jeep. And as God as my witness, I will never buy another Chrysler product again as long as I live. Life is too short, and I never want to deal with this type of unnecessary headache again.

5 Replies to “Why I’ll Never, Ever Buy Another Chrysler Product Again”