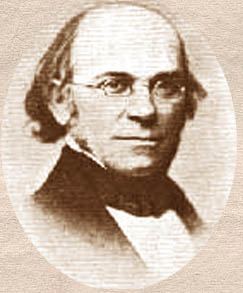 During times of civil unrest, particularly when that unrest is motivated by unequal justice based on race, people tend to quote Dr. Martin Luther King Jr. One of Dr. King’s most popular quotes at times like this is:

“The arc of the moral universe is long, but it bends toward justice.”

Until recently, I didn’t realize that Dr. King was actually paraphrasing a quote from a 19th century theologian and abolitionist by the name of Theodore Parker. I had previously never heard of Parker, and decided to look into the man and his message. What I found was quite interesting.

Parker was born in Massachusetts in 1810 to a farming family with long roots in the history of the United States. His ancestors were involved in founding and running cities in early day Massachusetts, and his grandfather, John Parker, was leader of the Lexington militia in the American Revolution Battle of Lexington.

Parker was self-taught in several subjects, including math and Latin, and he began teaching in a local school at the age of seventeen. At the age of nineteen, he applied to and was accepted at Harvard University, but he could not pay the tuition. Instead of attending classes, he studied on his own, then took exams with his classmates. He completed his studies in three years and was hired to teach in a school in Watertown, Massachusetts, where he met his wife, Lydia Dodge Cabot.

In addition to teaching, Parker began writing, completing his first book, The History of the Jews, when he was just twenty-five years old. The book was an extension of his strong religious faith, which included a healthy skepticism in Biblical miracles. His beliefs led him to attend Harvard Divinity School, after which, he began preaching in 1836.

Both his marriage to Lydia and his career in the ministry turned out to be a disappointment to him in the late 1830s. He and Lydia could not have children, placing great stress on the marriage, and he was becoming increasingly disillusioned with orthodox theology.

Parker met Ralph Waldo Emerson in 1837 and began attending Transcendentalist gatherings. During these gatherings, he met noted intellectuals such as Henry David Thoreau, Orestes Brownson, and Amos Bronson Alcot. Slowly, Transcendentalist thought began creeping into his sermons. After publishing an article about John Gorham Palfrey, in which Parker broke from the theology of supernatural realism, his critics in the Unitarian church began speaking out. Parker pushed back, and in 1841, gave a sermon entitled “A Discourse on the Transient and permanent Christianity,” openly breaking with orthodox theology by rejecting all Biblical miracles and revelations, and pointing out full contradictions and mistakes in the Bible. He kept his faith, but stressed the personal nature of belief, encouraging parishioners to “center their religious belief on individual experience” rather than on Biblical teachings.

Parker was attacked for his newly stated beliefs. Critics claimed that his denial of Biblical miracles and his belief that the Bible was not the literal authority of the church proved he was not a Christian. He fell out of favor with the Unitarian establishment, but his church at the time in West Roxbury stood by him. Increasingly isolated, Parker turned his attention to social activism, believing that advocating for the poor and disadvantaged in society was a natural out-growth of his religious beliefs.

As Parker matured in both his personal life and his ministry, both his marriage and career improved. He and Lydia traveled to Europe in 1843 and 1844. It was during this time that Parker developed and refined his theology. When he returned to the United States, the Unitarian establishment prevented him from resuming his post at the Roxbury church. Loyal congregants rented a hall in Boston, and, despite misgivings, Parker preached a sermon espousing his beliefs. The sermon went so well that he started a new congregation in Boston he referred to as the 28th Congregational Society of Boston. His congregation included several of the most prominent activists of the day, and eventually grew to more than 2000 congregants.

In 1846, Parker began to focus more of his efforts on social activism. Slavery was becoming a hot button issue in the country, and Parker was an avowed and devout abolitionist. He led the movement against the Fugitive Slave Act, which required citizens and law enforcement in all states, including free states, to assist in recovering fugitive slaves. He fought against the law, which was part of the Compromise of 1850, and personally smuggled and housed slaves in his home. His advocacy was so strong that between 1850 and the start of the Civil War in 1861, only two fugitive slaves were captured in Boston and returned to the South. Parker participated in reform movements of the day for peace, temperance, the condition of women, education, and justice reform, but no cause drew his energies the way the anti-slavery movement did.

In addition to inspiring MLK, President Abraham Lincoln paraphrased him in the Gettysburg Address. The words Lincoln used in that speech, “Of the people, by the people, and for the people” was borrowed from a speech Parker gave in 1850.

Dr. King’s quote was a paraphrase of a sermon given by Parker in which he said:

“Look at the facts of the world. You see a continual and progressive triumph of the right. I do not pretend to understand the moral universe; the arc is a long one, my eye reaches but little ways; I cannot calculate the curve and complete the figure by the experience of sight; I can divine it by conscience. And from what I see I am sure it bends towards justice.”

But it wasn’t just politicians or clergy or social activists that were influenced by Parker. In 1963, Betty Friedan, in her ground-breaking book The Feminine Mystic, quoted Parker in her epigraph:

“The domestic function of the woman does not exhaust her powers…To make one half of the human race consume its energies in the functions of housekeeper, wife and mother is a monstrous waste of the most precious material God ever made.”

Other quotes that speak to us still today include:

From “A Lesson for the Day”:

“Every man has at times in his mind the ideal of what he should be, but is not. This ideal may be high and complete, or it may be quite low and insufficient; yet in all men, that really seek to improve, it is better than the actual character. Perhaps no one is satisfied with himself, so that he never wishes to be wiser, better, and more holy. Man never falls so low, that he can see nothing higher than himself.”

From “Thoughts on Labour”:

“The world no doubt grows better; comfort is increased from age to age. What is a luxury in one generation, scarce attainable by the wealthy, becomes at last the possession of most men. Solomon with all his wealth had no carpet on his chamber-floor; no glass in his windows; no shirt to his back. But as the world goes, the increase of comforts does not fall chiefly into the hands of those who create them by their work. The mechanic cannot use the costly furniture he makes. This, however, is of small consequence ; but he has not always the more valuable consideration, TIME TO GROW WISER AND BETTER IN. As Society advances, the standard of poverty rises. A man in New England is called poor at this day, who would have been rich a hundred and fifty years ago; but as it rises, the number that falls beneath that standard becomes a greater part of the whole population. Of course the comfort of a few is purchased by the loss of the many. The world has grown rich and refined, but chiefly by the efforts of those who themselves continue poor and ignorant.”

From “The American Idea”:

“There is what I call the American idea. I so name it, because it seems to me to lie at the basis of all our truly original, distinctive, and American institutions. It is itself a complex idea, composed of three subordinate and more simple ideas, namely: The idea that all men have unalienable rights; that in respect thereof, all men are created equal; and that government is to be established and sustained for the purpose of giving every man an opportunity for the enjoyment and development of all these unalienable rights. This idea demands, as the proximate organization thereof, a democracy, that is, a government of all the people, by all the people, for all the people; of course, a government after the principles of eternal justice, the unchanging law of God; for shortness’ sake, I will call it the idea of Freedom.”

“It is very sad for a man to make himself servant to a single thing; his manhood all taken out of him by the hydraulic pressure of excessive business. — I should not like to be merely a great doctor, a great lawyer, a great minister, a great politician.—I should like to be, also, something of a man.”

From “Of Justice and the Conscience”:

“Man naturally loves justice, for its own sake, as the natural object of his conscience. As the mind loves truth and beauty, so conscience loves the right; it is true and beautiful to the moral faculties. Conscience rests in justice as an end, as the mind in truth. As truth is the side of God turned towards the intellect, so is justice the side of Him which conscience looks upon. Love of justice is the moral part of piety… The people are not satisfied with any form of government, or statute law, until it comes up to their sense of justice; so every progressive State revises its statutes from time to time, and at each revision comes nearer to the absolute right which human nature demands. Mankind, always progressive, revolutionizes constitutions, changes and changes, seeking to come close to the ideal justice, the divine and immutable law of the world, to which we all owe fealty, swear how we will.”