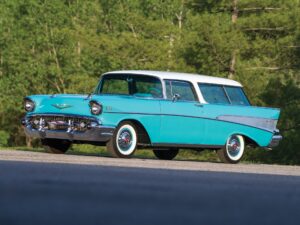 Chevrolet, Audi, and Dodge have done a masterful job of selling their cars by telling emotionally engaging stories that feature their vehicles, but don’t focus on their vehicles. They often release the video around Christmas, helping to ramp up the emotion even further. I’ve written about this strategy of telling stories to sell cars twice before. You can find those posts here (#1) and here (#2).

Chevy in particular has made a tradition out of producing an extended (i.e. longer than a regular commercial) video for Christmas, often featuring a vehicle they no longer produce. This year, it’s a 1957 Chevy Bel Air Nomad, a cool looking two-door station wagon. A brand new Chevy Blazer EV (I think) makes a brief appearance, but the 1957 Bel Air Nomad is the star of the show.

This five-plus minute video spans 50 or so years in the life of Mrs. Hayes, a widow lady who befriends the neighbor kids, and becomes a second mother to one young boy in particular. Take a look.