In my novella, Tierra del Fuego, the main character, Matt Cravens, is having trouble dealing with the twin emotions of grief and betrayal, after his wife, Lisa, who he suspects of having an affair, dies in an auto accident. When he feels grief, he is reminded that Lisa was cheating on him, which brings out the betrayal he feels. But when he feels the pain of Lisa’s infidelity, he experiences guilt because he is focusing on something other than the love he feels for his wife, and the grief he is struggling with over her death. His emotions are a jumbled mess that eventually lead him to run away to one of the most remote places on earth. 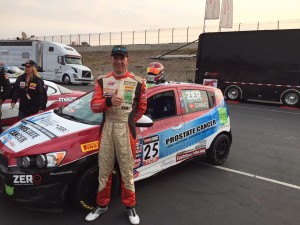 This past weekend, I felt dual, contradictory emotions like Matt, albeit on a slightly smaller scale. My friend, Johan Schwartz, ran his final race of the year in the Pirelli World Challenge Championship. When the three weekend races at Mazda Raceway Laguna Seca in California were complete, Johan had won the championship. This is no small feat. World Challenge is one of the top sports car racing series in North America, and it is incredibly competitive.

Johan is originally from Denmark, but he moved to the United States, away from his home and his family, to pursue his passion for auto racing. He has dedicated himself to building a career in motorsports, and all of his sacrifice and hard work is paying off in a big way.

I couldn’t be happier for him. After he clinched the championship, I sent Johan a note congratulating him, and told him how proud I was of his accomplishment.

A few hours after communicating with Johan, I heard the terrible news that Scott Dinsmore had been killed in an accident while climbing Mount Kilimanjaro. I didn’t know Scott well. He was a friend of a friend. I had been introduced to him a few years ago, and immediately liked his approach to life.

At a young age, Scott decided that he wanted to help others discover their passion, and do work that really mattered to them. He started a company called Live Your Legend, and proceeded to help thousands of people.

When I first met Scott and he learned that I had a passion for writing that I wasn’t pursuing, he encouraged me to do whatever I had to do to find the time and space to write. He didn’t have to be encouraging. Heck, he had just met me. He could have easily muttered a few pleasantries, and been on his way. But he didn’t do that. Instead, he took the time to listen, and he genuinely cared that I do what my heart was telling me I should do. 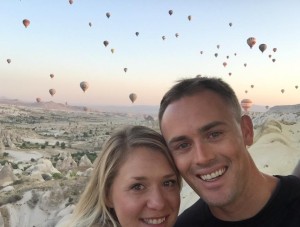 Several months ago, Scott and his wife Chelsea sold their home and most of their possessions, and went on an around the world tour that was supposed to last a year. They globe-trotted for eight months until they landed in Tanzania, where they were going to climb Mount Kilimanjoaro, one of the items on Scott’s bucket list. Sadly, rather than claiming that bucket list item, the mountain claimed him.

For a brief period over this past weekend, I was feeling on top of the world. I had just published my first book, and my friend Johan had won a racing championship. Life was great, then suddenly it wasn’t. My happiness, joy, and sense of accomplishment were mixed with the grief and despair I felt over Scott’s untimely death. Since then, my emotions have been tangled and disordered. One minute I’m happy thinking about my book or Johan’s success. The next I’m grieving the loss of Scott and his boundless joy and energy.

Scott packed a lifetime of passion and adventure into an all-too-short thirty-two years. If he taught us anything, it’s that we should take action now to do whatever it is that is most important to us in your lives. I’d like to think that the successes Johan and I experienced over the past week are the result of us taking such action. Despite the fact that Scott lost his life on the mountain, he too was following his passion and doing what he loved. And although I grieve his loss, I don’t think he would have wanted it any other way.

As a way of paying tribute to Scott’s life, here is the Ted talk he gave in October 2012. I hope you enjoy it as much as I did.