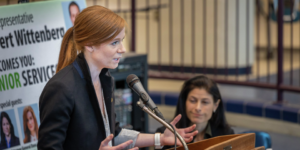 Politics in the United States has gone completely off the rails. In fact, if you were alive in 1980 (or even 1990) and you were magically transported to 2022 to hear a political debate, you’d likely think that people went crazy in the intervening years. To hear politicians making wild claims about voting machines controlled by a dead Venezuelan president or Jewish space lasers that start forest fires or calling a murderous Russian dictator “smart” and “genius” would convince you that something in politics had gone horribly wrong.

One example of this craziness is the “Don’t Say Gay” bill that was passed into law in Florida. In essence, the “Don’t Say Gay” bill prohibits “classroom instruction” on “sexual orientation and gender identity” in kindergarten through third grade and in a manner that isn’t “age appropriate or developmentally appropriate” in all grades, K–12. In addition, the law creates a cause of action that allows parents to sue school districts if they feel the new law has been violated.

Gov. Ron DeSantis and his Republican colleagues defend the law, claiming it is inappropriate for public school teachers to discuss sexual orientation or behavior with young students. They especially oppose any effort by public school teachers to tell their young students that “they can be anything they want to be” from a sexual orientation perspective.

Opponents of the law say that it is an attempt to erase LBGTQ students and deny them support services schools currently provide. They also say that it is an effort to damage public schools and instead drive parents toward private, religious-based schools.

Other states have followed in Florida’s footsteps. More than a dozen other states have proposed similar laws to Florida’s “Don’t Say Gay” bill. One of those states is Michigan, where the legislature is also pushing a bill to prohibit “Critical Race Theory,” which they define as any discussion of race or how race impacted history.

State Senator Lana Theis, a supporter of both bills, called fellow State Senator, Mallory McMorrow, an opponent of the bills, a “groomer” for pedophiles. She also claimed that talk of race in public schools works to hurt white students and make them feel guilty.

Whether you support or oppose this type of law (this really applies to any law), it is beyond the pale to ascribe such vulgar, evil intent to a political opponent. Not everyone agrees on policy. That’s nothing new. But to launch such a bad faith attack on a fellow senator goes beyond acceptable political discourse. Making such hateful, ugly charges not only helps to normalize such charges, but it can, and has, led to threats of violence. It should have no place it our body politic and it should be called out whenever and wherever it happens.

That’s why I am so pleased to see how Senator McMorrow responded to her colleague’s ugly, hateful, bad faith contentions. She pushed back, not only on Theis’ charge of being a “groomer,” but also the implied claim Theis made that she and her ilk had cornered the market on Christianity, patriotism, and love for our children.

Here’s what she had to say on the floor of the Michigan State Senate:

“Senator Lana Theis accused me by name of grooming and sexualizing children in an attempt to marginalize me for standing up against her marginalizing the LGBTQ community…in a fundraising email, for herself. Hate wins when people like me stand by and let it happen. I won’t.

“I sat on it for a while wondering why me? Then I realized… I’m the biggest threat to your hollow, hateful scheme. Because you can’t claim that you’re targeting marginalized kids in the name of “parental rights” if another parent is standing up and saying no.

“So you dehumanize and marginalize ME. You say I’m one of THEM. You say she’s a groomer, she supports pedophilia, she wants children to believe they were responsible for slavery and to feel bad about themselves because they’re white. Here’s a little background on who I really am.

“Growing up my family was active in our church. I sang in choir. My mom taught CCD. One day, our priest called a meeting with my mom and told her that she was not living up to the church’s expectations, b/c she was divorced, and because he didn’t see her w us at mass every Sunday.

“Where was my mom on Sunday? She was at a soup kitchen. With me. My mom taught me at a young age that Christianity and faith was about being a part of a community, about recognizing our privilege and blessings and doing what we could to be of service to others -especially people who were marginalized, targeted, who had less…often unfairly.

“I learned that SERVICE was far more important than performative nonsense like being seen in the same pew every Sunday or writing “Christian” in your Twitter bio and using it as a shield to target and marginalize already-marginalized people.

“I also stand on the shoulders of people like Father Ted Hesburgh, the longtime president of the University of Notre Dame who was active in the civil rights movement, who recognized his power and privilege as a white man, a faith leader, and the head of an influential and well-respected institution – and who saw Black people in this country being targeted and discriminated against and beaten, and reached out and locked arms with Dr. Martin Luther King when he was alive, when it was unpopular and risky, and marching with them to say, “We got you.” To offer protection and service and allyship, to try to right wrongs and fix the injustice in the world.

“So who am I? I am a straight, white, Christian, married, suburban mom who knows that the very notion that learning about slavery or redlining or systemic racism means that children are being taught to feel bad or hate themselves because they are white is absolute nonsense.

“We are not responsible for the past. We also cannot change the past. We can’t pretend that it didn’t happen, or deny people their very right to exist.

“I want my daughter to know that she is loved, supported, and seen for whoever she becomes. I want her to be curious, empathetic, and kind. I want every child to feel seen, heard, and supported, not marginalized and targeted if they are not straight, white, and Christian.

“People who are different are not the reason our roads are in bad shape, or healthcare costs are too high, or teachers are leaving the profession. We cannot let hateful people tell you otherwise to scapegoat and deflect from the fact that they’re not doing anything to fix the real issues that impact peoples lives.

I know that hate will only win if people like me stand by and let it happen. And I want to be very clear right now: Call me whatever you want. I know who I am. I know what faith and service mean, and what it calls for in this moment.”