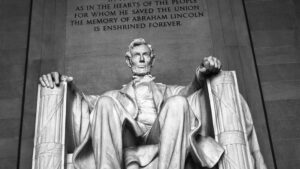 In early July 1854, Abraham Lincoln took some time to prepare for his upcoming campaign by writing down some thoughts he could use in speeches on the campaign trail. At the time, Lincoln’s political philosophy of the purpose of government was considered radical in comparison to his contemporaries. No other president before him took such an activist approach to governmental purpose as Lincoln did.

It is believed that the following fragment that was written in early July 1854 was composed in preparation for a lecture, although there is no proof that such a lecture was ever given. What is known is that Lincoln never shared these thoughts as part of a campaign speech while running for president, or in campaigns prior to his presidential run.

This is what Lincoln wrote about the purpose of government:

“The legitimate object of government, is to do for a community of people, whatever they need to have done, but can not do, at all, or can not, so well do, for themselves—in their separate, and individual capacities.

“In all that the people can individually do as well for themselves, government ought not to interfere.

“The desirable things which the individuals of a people can not do, or can not well do, for themselves, fall into two classes: those which have relation to wrongs, and those which have not. Each of these branch off into an infinite variety of subdivisions.

“The first—that in relation to wrongs—embraces all crimes, misdemeanors, and non-performance of contracts. The other embraces all which, in its nature, and without wrong, requires combined action, as public roads and highways, public schools, charities, pauperism, orphanage, estates of the deceased, and the machinery of government itself.

“From this it appears that if all men were just, there still would be some, though not so much, need of government.”

Before Lincoln, most politicians, including presidents, felt that the purpose of government was to not intrude on the life of the individual, other than to protect them from foreign invaders and provide them a freedom from government interference. Former New York Governor, Mario Cuomo, who was a well-regarded Lincolnphile, had this to say about Lincoln’s thoughts on the purpose of government:

“Some said government should do no more than protect its people from insurrection and foreign invasion and spend the rest of its time dispassionately observing the way its people played out the cards that fate had dealt them. He [Lincoln] scorned that view. He called it a ‘do nothing’ abdication of responsibility. ‘The legitimate object of government,’ he said, ‘is to do for the people what needs to be done, but which they cannot, by individual effort, do at all, or do so well, for themselves. There are many such things…,’ he said.  So he offered the ‘poor’ more than freedom and the encouragement of his own good example: he offered them government. Government that would work aggressively to help them find the chance they might not have found alone. He did it by fighting for bridges, railroad construction and other such projects that others decried as excessive government. He gave help for education, help for agriculture, land for the rural family struggling for a start.  And always, at the heart of his struggle and his yearning was the passion to make room for the outsider, the insistence upon a commitment to respect the idea of equality by fighting for inclusion.”

As I said, Lincoln’s approach to government was fairly new and out of the ordinary. In his life, Lincoln’s philosophy never got a fair hearing. He was too busy running a government engaged in a civil war, and he didn’t live long once the war was over. However, his words found a home with Theodore Roosevelt who became the father of what is generally known as “progressive Republicanism,” a term that seems like an oxymoron to us today, but which was popular with conservatives in the late 19th and early 20th centuries.

I’m really interested, not only in Lincoln’s philosophy of the purpose of government, but also in the way that philosophy inspired Theodore and Franklin Roosevelt, and how it led to one of the most progressive policy proposals in our country’s history. If you have any suggestions on readings (books, articles, etc.) that deal with this topic, please let me know in the comments.