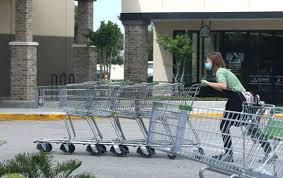 Before I begin my rant, let me be clear about one thing. I know I’m being petty. If you’ve ever heard the phrase “Don’t sweat the small stuff,” you’ll likely recognize that the things I’m complaining about are “the small stuff.” But writing is how I deal with most things in life, both good and bad. It helps clarify my thoughts, and often relieves any stress or anxiety. And it’s cheaper than therapy.

Probably my biggest complaint about the way people act at the grocery store is when they fail to put their shopping cart in the  cart return. Why would anyone think it’s okay to empty their cart and then simply leave it next to their car? The grocery store actually provides a place to put the used carts so they don’t cause parking problems or damage to shoppers’ cars. And the cart returns are conveniently located throughout the parking lot so they’re not too far from any parking spot. Yet, some people refuse to put forth even the tiny amount of effort it takes to put their used shopping cart where it belongs. These people make me so mad.

A couple of years ago I was walking out of the grocery store and saw a guy who had just emptied his groceries into his car. He pushed his empty cart to the front of his car and gave it a little shove. I normally would not have said anything, but I was in a bad mood and the thoughtless shopper set me off.

“Hey, there’s a cart return just down there,” I said, pointing at the cart return.

The shopper slowly turned toward me. When he did, I noticed his shriveled left arm. He looked confused and took a step toward me, limping badly. “What?” he asked. When he spoke, it became evident that he had a hair lip.

“Nothing,” I said in a friendly voice. “Never mind.” I quickly walked away.

I don’t chastise people anymore when they don’t put their used shopping cart in the cart return, but I still hate it.

I appreciate the fact that grocery stores put cart returns in their parking lots, but it irritates me to see a cart return overflowing with shopping carts. If shoppers are going to be good enough to put their used carts in the cart return, it needs to be emptied every once in a while. Otherwise, the carts left outside the full cart return can roll around and cause the exact same problems that carts left out in the parking lot can cause. Come on, people. You’re better than that.

Why do people insist on taking the parking spot closest to the store, even if they have to wait several minutes for another shopper to pull out of their parking spot? And why, while they’re waiting, do they hold up traffic in their aisle, despite the fact that there are plenty of other parking spots available?

At the store this morning, I saw a woman block traffic for several minutes waiting for someone to pull out of their parking spot. This, despite the fact that there was a parking spot open just three spots further from the store that she had to drive past before blocking the entire aisle. Stop doing this, people!

My grocery store has made each of their interior aisles one way, so shoppers in each aisle are all going in the same direction. I assume this is to help separate people because of the pandemic. Since I normally don’t go down every aisle, this is slightly inconvenient. Even so, I support it and follow the arrows for each aisle. These are not normal times.

Today, there was a woman (wearing a mask) who was going down the aisle the wrong way. She went past me, and then we crossed paths again in the next aisle. I wasn’t going to say anything. I didn’t think it was my place. She looked up at me, laughed, and said, “I know I’m going the wrong way.” She seemed embarrassed by her mistake. But she didn’t turn around to go the right way, and she proceeded to go the wrong way down the next aisle.

I’m not sure what she was trying to prove, if she was trying to prove anything. I took her deliberate disregard of the rules as a type of political statement, refusing to be told how to live her life. However, as I said, she was wearing a mask, so I could be wrong. It’s easy to ascribe evil motives, but in this case, I don’t have any idea why she refused to follow the rules.

A few weeks ago, I was shopping and had just paid for my groceries. As I was rolling my cart out of the store, one of the employees informed me that I was going out the wrong door. I was virtually one step away from being outside, but she apparently wanted me to go back into the store and then leave via the correct door. It wasn’t so much that she pointed out my mistake. It was her tone, filled with disdain, that really bothered me.

She pointed where she thought there was a sign, but the wall was empty. “It’s because of the coronavirus,” she said, not really answering my question.

I didn’t want to argue with her. If the store wanted to regulate the way people entered and exited as a way of promoting social distancing, that was fine with me. I’ was happy to comply. But I hadn’t seen a sign.

Today, as I was entering the store (through the correct door), I saw the employee who had confronted me, leaving the store from the incorrect door. Because I am an evolved, responsible adult, I didn’t say anything to her. But I did give her a dirty look.