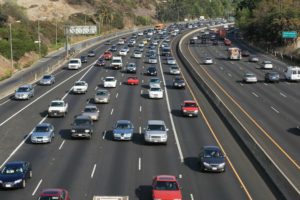 I drive a lot, spending a good part of my life on the roads between Wisconsin, Tennessee, Florida and all the states in between. And I can tell you, there are some really bad drivers out on our highways. I’m constantly amazed at the ignorance people have for the rules of the road, as well as a lack of common decency. I don’t advocate road rage, but often, I can understand it.

There are four things in particular that drive me nuts:

1. Driving in the Left Lane – This may be news to some, but the left lane of a divided, limited access highway is meant for passing. If you’re riding along in the left lane and you’re not passing someone to your right, you’re doing it wrong.

Let me put this in terms that might make more sense. Driving on the highway is a communal activity. We have to share the road with others, so it only makes sense to abide by a uniform set of rules to make the experience as safe and efficient as possible. That’s why there are signs on the highway (and laws on the books) that require slower traffic to keep right.

That doesn’t mean that if you’re doing the speed limit you can stay in the left lane since no one should be going faster than you. When the laws were created, legislators understood that not everyone would drive at or below the speed limit. So, they created a law that says that slower traffic, no matter your speed, must stay to the right. They knew that it would be safer, regardless of the speed traffic is going, for slower traffic to stay right, and passing traffic to use the left lane.

One time, I was listening to a radio show and the hosts were talking about the “left lane is for passing” rule. One of the hosts said she was more comfortable driving in the left lane, and she didn’t see why other drivers couldn’t simply pass her on the right. The other host was outraged. He told her that, not only was she being selfish doing what felt was best for her rather than what the law required, but she was also causing an unsafe situation, cruising along in the left lane expecting other drivers to find a way around her.

When they opened up the phone lines, the majority of the callers agreed that driving in the left lane was wrong, but I was surprised when several callers made the most ridiculous, illogical arguments to stay in the left lane. One caller said he paid taxes just like everyone else for the highways and he should be allowed to drive in any lane he chose. Another caller said she doesn’t like having other cars entering the highway into her lane, so she drives only in the left lane. In fact, she said that as soon as she gets on the highway, she gets over into the left lane, regardless of her speed and regardless of other traffic. Several callers voiced some version of the “I always go the speed limit, so no one should be going faster than me” rationale.

As a civilized society, we all have to abide by a certain set of rules in order for all of us to stay safe. Laws that say “passing only in the left lane” or “slower traffic must keep right” are part of those rules. Do yourself and everyone else on the road a favor, only use the left lane for passing.

The entire time I sat behind the self-appointed traffic monitor in the Explorer, I was certain that what he was doing to block traffic was not only illegal, but unwise. It just made sense to me that everyone would be better off if we took advantage of both lanes for as long as possible before merging. I was tempted to pass the idiot in the white Explorer on the shoulder, but I didn’t want to be “that guy.” If this ever happens again, you can be sure that I will be “that guy.” From now on, I will be practicing “the zipper.”

Science confirms that utilizing all open lanes for as long as possible and then using “zipper” merging is not only more efficient, but also, safer. So, what is zipper merging? Just like with the zipper on a hoodie or pair of pants, drivers take turns moving forward. Each driver in the lane that is staying open allows one of the cars from the closing lane to merge over. It’s faster, safer, and reduces congestion.

3. Flashers On When Raining – For some reason, people think they’re being safe by tuning on their emergency flashers when driving in the rain. It isn’t safer. In fact, it’s distracting and dangerous.

Think of it this way: You’re driving down the highway and it’s raining. Visibility is diminished, and all of a sudden, the guy in front of you turns on his flashers. You see red lights come on in front of you, and you assume he’s braking, so you brake too, stacking up traffic behind you. But he’s not braking. His lights go off and you let off your brakes. But then they come back on. You brake again. What a pain.

As you drive along, the flasher guy changes lanes, but his blinkers can’t work while his flashers are on, so no one knows that he’s changing lanes. When he does brake, it takes you a second to realize it because his taillights have been flashing for the last couple of miles. Good luck stopping.

Oh, and if these reasons aren’t enough, here’s another one: driving with your emergency flashers on in the rain is against the law in most states. Flashers are designed to signal to law enforcement that there is an emergency. Rain is not an emergency, no matter how hard it’s coming down.

4. Truckers Changing Lanes Because of a Vehicle on the Shoulder – My final rant is saved specifically for truck drivers. I can’t tell you the number of times I’ve seen a tractor-trailer driving along in the right lane, suddenly change lanes to the left because of a vehicle pulled off on the right side of the road. The trucker obviously feels it would be safer to be a lane farther to the left from the vehicle on the shoulder, but is it?

All too often, I’ve seen trucks suddenly change lanes, despite the fact that traffic to their left is going significantly faster than them, and at times, despite the fact that there are already vehicles directly to their left. What is safer? Being farther away from the vehicle on the shoulder or changing lanes when another vehicle is already in that lane, either directly next to the truck or coming up quickly to the left of the truck? I think the answer is obvious, yet I see truckers doing this all the time, avoiding a potentially dangerous situation by creating a much more dangerous situation.

Okay, that’s enough ranting for today. Time to go for a drive.