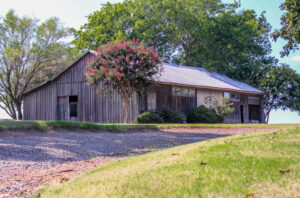 It isn’t much to look at. It’s not ugly, but there’s nothing beautiful about it either. It’s just an old barn. Gray, weathered boards cover the exterior, along with a few mismatched sheets of unpainted brown plywood here and there covering holes in the walls. The roof is covered with gray corrugated steel, the edges rusty and worn.

Big sliding barn doors, the same color as the plywood patches, cover the entrance. The bottom of the doors are rotting away, delaminating. The doors still do their job, but they don’t look as good as they once did.

The barn is unremarkable on its own,  but it’s part of a larger scene. Deciduous trees grow next to the barn, and a sloping, manicured lawn surrounds it, along with a winding dirt path. The sky above is azure blue, punctuated by fluffy, white clouds. The barn is the centerpiece of a serene, pastoral scene. It’s peaceful, comforting, relaxing.

But if those gray, weathered walls could talk, they wouldn’t talk about anything serene or peaceful. They’d speak of evil, of hatred, of violence. They’d tell a story that happened nearly seventy years ago, and which still haunts the barn, the community, the state, and our nation.

During that summer, Emmitt was visiting family in Mississippi. He traveled with his mother, who tried to prepare him for the visit. She told him that Mississippi was not like Chicago, where Till and his mother lived. She told him that he had to show respect to his elders, especially white elders, calling them “sir” and “ma’am.” She told him not to look white woman in the eye. He needed to be respectful, quiet, invisible.

Emmitt was staying with his great-uncle, Mose Wright, at his home on Dark Fear Road near Money, Mississippi. Mose’s youngest son, Simeon, and another cousin, Wheeler Parker, took Emmitt along with them to Bryant’s Grocery, a small convenience grocery on a rural road near Money. The boys were looking around the store when Emmitt spotted 21-year-old Carolyn Bryant.  He whistled at her. There have been stories written claiming he never whistled, but the truth is, he did. Simeon and Wheeler confirmed it.

A black boy whistling at a white woman in 1950s Mississippi was a foolhardy, dangerous act, but Emmitt didn’t immediately understand what he had done. Simeon and Wheeler, they knew. They were both older and used to the mores of life in Mississippi, and they knew that Emmitt’s action was going to cause them trouble.

Simeon thought about telling his father what had happened at Bryant’s Grocery–how Emmitt had broken one of the many unwritten rules that existed in Jim Crow America. Maybe they could sneak Emmitt out of town until his crime was forgotten. Maybe they could hide him from what Simeon feared would be a quick and severe punishment from the white people in town. Simeon decided not to say anything. It was a decision he regretted  later that evening, and for the rest of his life.

Emmitt was fast asleep when two white men walked into his darkened room. The men, Roy Bryant, the husband of the woman Emmitt whistled at, and J.W. Milam, who held a flashlight and a pistol, woke Emmitt, demanding he come outside with them. Emmitt was groggy, asking the men if he could put on his socks. The men become agitated, demanding Emmitt move. Moses’ wife, Emmitt’s great-aunt, begged the men not to take her nephew, but their minds were made up. They weren’t leaving the house without Emmitt.

Outside, the night was still, the buzzing of insects filling the silences. Mose followed the men as they dragged Emmitt out of the house. He heard a woman’s voice tell them that, yes, they had gotten the right man.  Mose saw them force his nephew into the back of a pickup truck, then pull away, driving down Dark Fear Road until they disappeared into the Mississippi night.

Leslie Milam, the brother of J.W. Milam, lived in an old farmhouse on a plantation owned by Ben Sturdivant. The house was run down and in need of new paint. A barn, used to store cotton and farm equipment, stood behind the house on the top of a small rise. The barn was worn and weather-beaten, with faded gray walls and a metal roof, it’s edges rusted from years exposed to the elements. Two large, sliding doors stood open, revealing the interior of the barn.

The Milam brothers, Bryant, and a couple other white men—no one is exactly sure how many—pulled Emmitt from the bed of the truck and dragged him into the barn behind the farmhouse. Wille Reed, an 18-year old black man saw this happen. He stayed out of sight near the road and listened to Emmitt screaming for the men to stop beating him. At one point, Reed saw J.W. exit the barn to get a drink of water, a pistol holstered on his hip. J.W. rested for a moment, then returned to the barn. When he did, Emmitt’s screams turned to moans, then to silence.

J.W., Roy, and the others talked about taking Emmitt to the hospital, but all agreed that he was beyond saving. Their beating had gone too far. One of the men—presumably J.W.—shot Emmitt in the head, ending his misery. They spread cotton seeds on the barn floor to soak up the blood.

The men then loaded Emmitt’s lifeless body into the pickup truck and drove to a bridge over the Tallahatchie River. There, they tied a cotton gin fan around his neck and tossed him into the murky water below.

Willie Reed told his grandfather what he had seen at the Milam barn, and his grandfather begged him not to talk about it with anyone, especially not the police. Willie thought it over. He struggled with his decision. In the end, he chose to talk.

J.W. Milam and Roy Bryant were tried for the murder of Emmitt Till. Willie, Mose, and others testified about what had happened to Emmitt. It didn’t matter. Milam and Bryant were both acquitted by an all-white jury.

After the trial, Willie ran for his life, having to escape the area to avoid a mob that was searching for any witnesses. He made his way to Memphis where he met up with Detroit Congressman Charlie Diggs, who flew with Willie to Chicago. It was Willie’s first time on an airplane.

Willie started a new life in Chicago,. He changed his name to Willie Louis and met a young nurse named Juliet. They married and bought a home in the Englewood neighborhood of Chicago. He avoided visits to his old home and didn’t talk about what he had seen that night. Willie and Juliet were together for more than twenty years before she first learned about his old name and his connection to Emmitt Till. Willie died near his Chicago home in 2013.

After the trial, Life Magazine paid J.W. Milam and Roy Bryant to give a full confession they could print for their readers. The two men obliged. It was a mistake. They became ostracized in the community, not so much for the murder, but for bragging about it in a magazine. People in the community felt the paid-for confession brought disrepute on them and their fellow Mississippians. By bragging, Milam and Bryant had made them look bad.

Carolyn Bryant testified at the murder trial of her husband and JW Milam that Emmitt not only whistled at her, but grabbed her and made a lewd comment. That was almost certainly a lie. Emmitt’s cousins, Simeon and Wheeler, said Emmitt only whistled. Nothing else.

Carolyn and Roy Bryant remained married until their divorce in 1979. Carolyn is still alive today, living in a senior living center in Raleigh, NC. Last month, a team investigating the Emmitt Till murder discovered a warrant for Carolyn Bryant’s arrest. In 1955, the Laflore County, MS Sheriff indicated that he would not serve the warrant because Carolyn had two children at home and he didn’t want to bother her. After that, the warrant was forgotten until it was rediscovered last month. Some groups have called for the warrant to be served and for Carolyn Bryant to be tried for her role in Emmitt Till’s murder, but it is unlikely that a prosecutor would agree to move forward with charges against the 88-year old Bryant so long after the murder.

Carolyn’s husband, Roy Bryant, ended up closing his store. Since most of his customers were black, business had slacked off after the murder. He spent the rest of his life broke, moving from one run-down rental to another, shunned by his neighbors and former friends. He died on September 1, 1994.

J.W. Milam lived out his days in a poor black neighborhood. It was the only place he could afford to live. He spent his life skirting the law, committing assault, writing bad checks, using stolen credit cards, and committing other petty crimes. He died on December 31, 1980.

Three months after the murder of Emmitt Till, Ben Sturdivant evicted Leslie Milam and his wife from the old farmhouse and fired him from his job on the plantation. Ben’s grandson, Walker Sturdivant, who still lives in the area, said that his grandfather didn’t approve of what happened in the barn and didn’t want any part of it.

Nineteen years later, Frances Milam, Leslie’s wife, called a Baptist preacher named Macklyn Hubbard, and asked him to visit their home. Leslie was sick and wanted to confess the role he played in the Emmitt Till murder. Hubbard listened as Milam unburdened himself. “He was releasing himself of guilt,” Hubbard later said. “He was belching out guilt.” After giving his confession, Leslie Milam fell asleep and died.

Years later, the Milam home was bulldozed and replaced with a nicer, newer home. There’s even a built-in pool. Off in the backyard, on a slight rise, stands the barn, with its gray, weathered exterior, metal roof, and a story to tell. It’s a tough, emotional story about evil, and hate, and violence. It’s a story that reminds us of who we once were as a country. It reminds us of how far we’ve come and how far we still have to go. Even though it’s hard to hear, it’s a story we should listen to. It’s a story we should never forget.