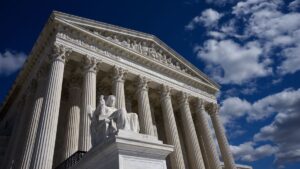 A little over a year ago, I wrote an essay about what I expected to happen in Congress concerning the Supreme Court in the wake of the death of Ruth Bader Ginsburg. September 2020, when the essay was written, was a different time. Amy Coney Barrett had yet been confirmed to the Supreme Court, and the 2020 Presidential election hadn’t yet taken place. In addition, the January 6 insurrection was still nearly four months in the future and the Republicans’ attempts to explain it away or excuse it had not yet happened. Finally, the new Supreme Court had not yet weighed in on exactly how conservative they were going to be.

If you read my earlier essay, you may have come away thinking I was a little naïve about what was in store for the Supreme Court and our nation. I’d tend to agree. The past year has proven that things can get much worse than I was willing to conceive or admit. So, on that count, guilty as charged.

Recently, Steven Beschloss, an award-winning journalist and professor at Arizona State University, wrote an article asking whether his readers thought the Supreme Court should be expanded beyond nine justices. That got me thinking again about what is happening with the Supreme Court and what, if anything, should be done about it.

Before I examine the question Steven Beschloss proposed, let me share a small part of my essay from last September. In the essay, I didn’t yet know if Amy Coney Barrett would be confirmed (She had just been nominated), but I made the following predictions of what would happen if she was:

As I stated in the essay, these predictions were contingent on 1) Joe Biden winning the presidency, and 2) Democrats gaining control of the Senate. We now know that both of those things happened.

I have to admit that I am surprised that Democrats have not come close to doing any of these things. In fact, I’ll further admit that I’m surprised at how few things the Democrats have been able to accomplish. They control the presidency, the House, and the Senate, yet they can’t seem to achieve many of the things they campaigned on in 2020. That’s an essay for another day, but I have to admit I don’t completely understand their reluctance or inability to do what they set out to do.

For now, I’d like to focus on the possibility of expanding the Supreme Court. First, a little history:

There is a long history of changing the number of Supreme Court justices. Often, the changes occur for political reasons. But politics is not the only justification for making changes. There are two reasons in particular I’d like to explore.

First, the United States is a much bigger, more diverse, more complicated place in 2021 than it was in 1789 when the Supreme Court was first implement. In 1789, the United States consisted of 22 states and a population of about 4 million. Today, we have 50 states, several territories, and a population of more than 330 million. More States and more people mean more court cases and more controversies for the Supreme Court to adjudicate. Going from six justices in 1789 to nine justices today, at least by the numbers, is wholly inadequate.

Second—and to me, this is the bigger point—the Supreme Court is politically out of step with the electorate. The Supreme Court, as currently comprised, is much more conservative than the population as a whole. This is a problem because the legitimacy of the Court’s decisions are contingent on the support and acceptance of the populace. The justices on the Supreme Court may never be a perfect reflection of the people they represent, but the more disparate they are, the less legitimacy they have.

University of Texas Law Professor Steve Vladek recently addressed this issue of legitimacy in an article he wrote for Slate. Here’s part of what he said:

“I testified at last week’s [Senate] hearing. Many of the senators at least indirectly directed their criticisms at me. It’s true that I have grown far more publicly critical of the court in recent years, especially of its work on the shadow docket. I’ve grown increasingly concerned about the sharp uptick in unsigned, unexplained, and increasingly inconsistent rulings that affect the rights of millions of Americans. I can’t speak for all progressive critics of the Supreme Court, but I can speak for myself: We are within sight of a full-blown legitimacy crisis. My criticisms are not an attempt to exacerbate that crisis, but to impel the justices to avoid it.

“If their recent public appearances are any indication, the justices also understand that a crisis is looming. As the justices have long admitted, the power of their rulings comes from the court’s legitimacy. The court has no military to enforce its judgments. So it depends upon popular support, not for rulings that the public generally supports, but for its unpopular rulings in particular. To that end, the court defines its legitimacy as “a product of substance and perception that shows itself in the people’s acceptance of the Judiciary as fit to determine what the Nation’s law means and to declare what it demands.” In other words, it’s not that the justices are getting each ruling “right,” but that they’re responsibly exercising judicial, rather than political, power.

“This legitimacy is eroding quickly. The court is as unpopular now as it has been in a generation. Many progressives—who reasonably fear what the new conservative majority portends for everything from the modern administrative state to the social safety net, elections, and the rights of criminal defendants—smell blood in the water.

“Our constitutional republic needs a Supreme Court, even one populated with a majority of justices with whom we routinely disagree. No less so than when this country was founded—and perhaps far more so with the proliferation of partisan gerrymandering—tyrannies of the elected majority remain a very real threat. The whole point of having an independent, unelected judiciary was to stand as a bulwark against the mob: to enforce the Constitution at the expense of democratic (or not-so-democratic) majorities in those infrequent but important moments when it is necessary.

“We will never all agree on which moments (and which of the Constitution’s provisions) justify such counter-majoritarian judicial intervention. But we do all agree that when they come, we need not just a court, but a court perceived to be legitimate. A toothless court, in contrast, would have no ability to stand up for our rights, whether the unchecked tyrannical majorities have Democratic leaders or Republican ones. Its decisions would simply be ignored or dismissed as partisan claptrap that should not be understood to bind the other side.

“After all, it is no exaggeration to say that democracy itself may depend upon a court still widely perceived to be legitimate in the months and years to come, as courts become the battlefield for fights over voter suppression laws, election integrity disputes, and perhaps even the legitimacy of election results themselves. While the alternative to a legitimate court may be satisfying in the short term, it will end poorly not just for the justices, but for all of us who aspire to, in John Adams’ trenchant words, “a government of laws, not of men.”

Republicans in the Senate warn Democrats about the dangers of packing the court, but the truth is, Republicans have already packed it. They had a 5-4 majority with Ginsburg on the court. When she died, they could have chosen not to fill her vacancy, allowing the new president (Biden) to appoint a new justice, and they still would have had a conservative majority. They weren’t satisfied with just a majority. They wanted to put as many conservative justices on the Supreme Court as possible. They were more concerned with their political fortunes than they were the health of the Court and the nation. So, they created a court that is now wildly out of step with the thoughts and values of the people who are supposed to conform to their rulings.

As a general rule, I don’t like the idea of increasing the number of justices on the Supreme Court, especially for political reasons. But I don’t think Republicans in the Senate have left us with any other choice. The court only works as intended when it is balanced and represents the will of the people. Strictly speaking, the judiciary is not, and should not be, political. But the decisions the Court reaches speak to the political will of the people. A population that overwhelmingly believes in X will not react favorably if the Supreme Court tells them the law does not allow X. Granted, the Supreme Court should not simply be a rubber stamp for the whims of the people, but it should act within a narrow parameter set by the people.

We’ve reached the point where increasing the size of the court to eliminate the conservative super majority is necessary. If I had to guess, I’d say the court should be increased to thirteen, creating a 7-6 liberal majority.

Having said this, I’m becoming convinced that the Democrats in Congress do not have the political will or ability to get this done. They’d likely agree with everything I’ve said in this essay, but would likely still fail to take action to see it through. This is one big reason that, although I can no longer call myself a Republican, I still can’t call myself a Democrat.