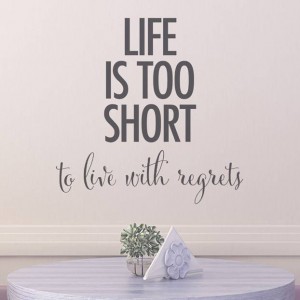 “Regrets? I had a few, but then again, too few to mention.”

— “My Way” as sung by Frank Sinatra

Although this blog is designed to be a place where I can talk about my writing, I occasionally want to post other things that I have on my mind. I read an article recently about what people most regret at the end of their lives. This made me wonder if I was living a life of few regrets, or, if like the people in the article, I would have a bunch of regrets at the end of my life.

The article itself was prompted by a query posted on the website Quora.com. That post is itself an interesting read, but the article that sprang from the query concentrated on the five biggest regrets. Here they are in order, along with some of my own thoughts:

1.Trying too hard to please others

This regret was also the top regret listed in a popular article from 2012 written by a hospice nurse. In that article, the author quoted one of the respondents as saying “I wish I’d had the courage to live true to myself, not the life others expected of me.” Author and investor James Altucher added, “Nobody is more worthy of love in the entire universe than you. I wish I had reminded myself of that more. I could’ve saved all of that time where I was trying to please someone else.”

While I completely understand this regret, I also think that human relationships (especially romantic relationships) require that we do things for others, not just for ourselves. I’m a pretty selfish guy when it comes to meeting my life goals, but even I understand that we all have to compromise and sacrifice from time to time. As my mother used to say: “The world doesn’t revolve around you.” The desires of other people have to occasionally supplant our own.

Having said that, each of us has the responsibility to achieve our own dreams. If something is standing in the way of you getting what you want, it’s up to you to find a way around that obstacle, even if that obstacle is another person. Failing to do what is in your own best interest leads to resentment and regret. You can’t be egocentric all of the time, but pursuing your dreams and passions some of the time can lead to fewer regrets at the end of your life.

2. Too much pointless worry

According to Professor Karl Pillemer, “In our research at Cornell University, I asked hundreds of the oldest Americans that question (about regret). I had expected big-ticket items: an affair, a shady business deal, addictions—that kind of thing. I was therefore unprepared for the answer they often gave: I wish I hadn’t spent so much of my life worrying.”

I’m as prone to worry as anyone else, but it’s always struck me as odd that we often allow the fear created by worry to rule our lives. I like what the Dalia Lama says about worry: “If a problem is fixable, if a situation is such that you can do something about it, then there is no need to worry. If it’s not fixable, then there’s no help in worrying. There is no benefit in worrying whatsoever.”

Mark Twain said it a little differently: “I am an old man and have known a great many troubles, but most of them never happened.”

Want to have fewer regrets? Worry a lot less.

3. Focusing too much on acquiring stuff

I really struggle with this one. I have been fortunate in my life to own nice houses and fancy cars. But the one thing I noticed whenever I got a new house or car was that it didn’t change anything. I wasn’t any happier. And in fact, I often realized that I could have been just as happy with a less expensive house or car. I was grateful for what I had, but it didn’t change my life for the better. Even so, I still find myself desiring material possessions that I’m convinced will make my life better. Sometimes they do. More often they don’t.

I try to follow Altucher’s advice when he suggests buying experiences rather than stuff. I think there’s a lot of truth in this recommendation. You almost never get buyer’s remorse when it comes to spending money on experiences, unlike when you buy a big ticket item like a television, car or new home.

Researcher Amit Kumar says something similar, but with bigger words: “The anticipatory period [for experiential purchases] tends to be more pleasant…less tinged with impatience relative to future material purchases we’re planning on making. Those waiting for an experience tended to be in a better mood and better behaved than those waiting for a material good.” [Editor’s note: “Better behaved?”]

4. Not taking care of your physical health

I’m (hopefully) not at the end of my life, but I already regret this one. During my first thirty years, I was fortune to have had great health, despite living a relatively unhealthy lifestyle. I drank too much, followed a horrible diet, and burned the candle at both ends. I was definitely a “work hard, play hard” kind of guy. And yet, I stayed physically fit and in good health. Thank God for youth and good genes.

In more recent years, things haven’t been so easy. I have to work like crazy to stay in shape (a battle I’m still fighting) and always have to consider my health when making food, drink, and activity decisions. I’m certainly not alone in this experience. It’s all part of getting old.

I wish I had made better health decisions when I was younger, but there’s nothing I can do about that now. The best I can do is make better decisions today. If I’m consistent in these decisions, I should stay healthy into the future, and have fewer regrets when the end finally comes (in about 100 years).

“Travel more when you’re young rather than wait until the children are grown or you’re retired,” Professor Pillemer says. “Travel is so rewarding that it should take precedence over other things younger people spend money on.”

I have a split personality when it comes to travel. On the one hand, I think it’s crazy that people don’t travel more. Any American can go just about anywhere in the world quickly, safely, and relatively cheaply. Never before in history has it been this easy to see the world.

On the other hand, there are only a few places I’d really like to see. I’d like to go to Ireland, Spain, Italy, Panama, Brazil, and the Caribbean islands. I’d also like to travel more around the United States and Canada. But the truth is, travel isn’t at the top of my list of priorities. In theory, I like the idea of wandering the globe, but I’m not hell-bent to drop everything and see the world.

Sadly, if things don’t change in the coming years, this may be a regret I have at the end of my life. I hope not. Since travel isn’t a priority to me now, maybe it won’t be that important to me on my death bed. Just to be safe, I’ll be doing a little traveling in the coming years.

I’m a big believer that our lives are the sum of the choices we make. If we want to reach the end of (hopefully) long and productive lives, we have to make good decisions today. It’s not a guarantee, but I do think it helps us to live lives of gratitude and satisfaction, rather than spending our final days living with regret.