I have a disease. It causes me to develop an intense, almost instantaneous interest in every business opportunity that comes my way. Flipping houses? I’m interested. Amazon FBA? Tell me more. An Internet business? Hey, I could do that. I even sometimes think about returning to a 50-60 hour per week corporate job. Sure, I’d lose all of my writing time and freedom, but I could make a lot more money. And isn’t money the way we keep score?

That last sentence is the problem. At some point in my life, I bought into the belief that the amount of money I made was the way my success was measured. The more money I made, the more successful I was. And I always wanted to be more successful, so I always needed to make more money. But even more than that, I began to equate my value as a person with the amount of money I was making. Deep down, I think I knew this was wrong, but I believed it anyway.

I also bought into the myth that money equals happiness. Again, I instinctively knew that this belief was wrong–or at least incomplete–but everyone around me had bought into it, so why shouldn’t I? 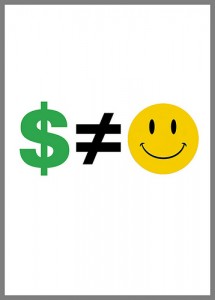 In recent years, I’ve been in remission from this economically-motivated disease, but every once in a while I have a flare up, and I need a reminder to resist the urge to chase the almighty dollar. This blog post from author and experiential researcher, Tim Ferriss, does a good job of explaining my struggle, and the reason anyone whose main goal is happiness should fight the compulsion to chase the money.

In the August 5th New York Times article titled, “In Silicon Valley, Millionaires Who Don’t Feel Rich,” he and others in the nation’s wealthiest 1/2 of 1 percent admitted to feeling compelled to work 60-80-hour work weeks just to keep up. Hal Steger, who’s banked more than $2 million and has a net worth of $3.5 million, echoes the sentiments of these “working-class millionaires” when he says, “…a few million doesn’t go as far as it used to. Maybe in the ’70s, a few million bucks meant ‘Lifestyles of the Rich and Famous,’ or Richie Rich living in a big house with a butler. But not anymore…

I live in a nice part of Silicon Valley, and I do whatever I want for less than $5,000 per month. There are more metrics to consider. More important, I’m “happy” by all conventional measurements. But I’ll be the first to admit… it hasn’t been this way for long. Only in the last three years have I really come to understand the concepts of time as currency and positional economics. Before I explain how you can use both to exit the rat race and dramatically upgrade your Lifestyle Quotient, let’s look at some numbers… According to polls on this blog:

Would you be happier if you were richer? A recent study published in Science by a group including Princeton professors Alan Krueger and Daniel Kahneman, winner of the 2002 Nobel Prize for his work in behavioral economics, indicates that annual income is less important than anyone could have guessed. In fact, it gets less important as the per-capita average continues to grow. Here are a few highlights that foreshadow where we’re headed:

-The ways in which people with high incomes spend their time tend to make them more tense and stressed than their less-affluent counterparts.

-If personal wealth does not necessarily lead to personal happiness, then how well does gross national income reflect a nation’s well-being? Not well at all.

-Economists can add another dimension to their measurements by examining an alternative currency: time, “the coin of life,” as poet Carl Sandburg called it. The study of income and happiness featured in the Science paper suggests that time-use — how one uses one’s time — plays an important role in personal well-being, so national measures of time-use might aid our understanding of well-being on a national scale.

In the study itself, they move into positional economics and answer the question: why does income have such a weak effect on subjective well-being?…Basically, even permanent increases in income have little effect on perceived happiness, as we compare ourselves to those above us, no matter how much progress we make. Material goods give us a short-lived happiness sugar high, and we seem committed to making ourselves miserable. That sucks.

What to do? There are a few ways to use the currency of time, and awareness of positional economics, to your advantage to beat the Joneses on new terms:

1. Focus on “relative income” — defined as hourly income — instead of “absolute income,” misleading annual income that doesn’t factor in time. If you assume a 40-hour work week and 2 weeks of vacation per year, estimate per-hour income by cutting off the last three zeros and dividing in half. Thus: $50,000 per year –> $50 divided by 2 = $25 per hour. Relative income can be increased by increasing total income for the same hours, getting the same income for fewer hours, or some combination thereof. More options with more life.

2. Determine your precise Target Monthly Income (TMI) for your ideal lifestyle — the goal of most rat-race income competition — and focus on structuring mini-retirements to redistribute retirement throughout life. There’s an excellent Excel spreadsheet here for calculations.

3. Determine your “where” of happiness. It’s not necessary to permanently move to a country with depressed currency, but even temporary relocation to a domestic (check out Forbes’ publisher Rich Karlgaard’s Life 2.0) or international location with a lower cost-of-living resets your peer group and positional economics barometer. Being perceived as rich often translates into perceiving yourself as rich. Neat trick and a hell of a lot of fun. Two of my top picks for positional resets are Argentina (see“How to Live Like a Rock Star (or Tango Star) in Buenos Aires”) and Thailand.

4. Develop appreciation in tandem with achievement. Subjective happiness depends on appreciating what you get as much as getting what you want. The first step to true appreciation is perception: cultivating present-awareness. I recommend experimenting with lucid dreaming as tested at Stanford University, in particular the “reality check” exercises of Dr. Stephen Laberge.

5. Develop competitive social groups outside of work. Participate in games outside of income mongering. Train or compete in a sport where income is a non-factor. That dude makes $1,000,000 a day as a hedge fund manager? I don’t care–his golf swing sucks and he has love handles. Here, it counts for nothing. Oh, and her? I know she just got promoted to national manager for IBM, but so what? I just scored 5 goals on her. In this world, I rule.

Don’t let rat racing be the only game you play against the Joneses. There is always someone willing to sacrifice it all to earn more, so let them. Just remember: it is entirely possible — in fact, common — to be a success in business and a failure in life. Take the red pill and think different.