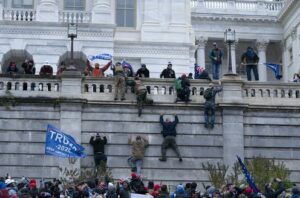 In the hours after terrorists flew two planes into the World Trade Center in New York, I was sitting at my home in Wisconsin watching it all unfold on TV. At the time, we were hosting a foreign exchange student from Germany. She was a pretty cool customer, but I could tell by her fascination with the images on the television, that she was concerned, maybe even frightened, by what had happened earlier that day.

As we watched the news coverage and listened to journalists and pundits try to dissect the attack, Sophie, our foreign exchange student, asked me the question that was on everyone’s mind.

I was sitting in my favorite chair, holding my young son, and I remember thinking how badly I wanted to tell Sophie that everything was going to be alright. After all, she was just eighteen years old, and in the middle of a heinous, devastating terrorist attack, she was far away from home, far away from her parents, and far away from the things that anchored her in life. I wanted to reassure her, but I wasn’t willing to lie about what had happened that day.

“I don’t know what comes next,” I said. “But things will never be the same.”

That’s how I feel today about the insurrection that took place in Washington, DC this past week. I don’t know what will happen next, but I’m certain that things will never be the same.

Americans have been blessed with a stable, if imperfect, government for nearly 245 years. We’ve weathered depressions, pandemics, and wars, including a Civil War, but our country has survived, and at times, thrived. We can be forgiven if we’ve taken for granted the blessings of our enduring democracy, and the rights and freedoms that come with it. They are our birthright. What we’ve failed to understand is that these rights and freedoms are not automatic. They must be protected. If we don’t remain vigilant, they can be lost.

Because of our good fortune of living in a free, democratic country, we weren’t prepared for the rise of authoritarian sentiment. Many of us thought it couldn’t happen here. We knew the term coup d’état, but we thought it was reserved for other less enlightened countries. The thought of a coup in America never crossed our minds. So, when it walked up in broad daylight in the person of Donald Trump, most of us didn’t recognize it. Even as he violated democratic norms and bent the Constitution to the point of breaking, we still didn’t recognize, or couldn’t admit, that Trump was an existential threat to our country and our way of life.

Even now, after he incited a bloody insurrection that claimed the lives of five people, caused significant damage to the Capitol, and disrupted the workings of the Congress, many people still refuse to admit that what Trump and his supporters did to try to overturn a free and fair election was an attempted coup. These people make excuses, and lies, to deflect the fact that their favored president, on U.S. soil, called for an insurrection and led a bloody coup.

But there’s another aspect to what happened at our Capitol that I’m just now starting to come to grips with. It has taken a few days, but the emotions from the attack on our democracy are now running full speed.

I’m a proud American who loves our country and our democracy. I can be critical of our government, often harshly critical. But that’s only because of their failures to establish a more perfect union. I hate to see potential wasted, and often, our government fails to realize the potential that our American values and institutions promise. Even so, I am a proud American who marvels at our history (as flawed as it is at times) and has great hope for our future.

As a proud American, I was horrified watching our Capitol come under siege. It wasn’t just that insurrectionists had taken over the building. It was what the building represented. The Capitol is a symbol of freedom, a sanctuary of our republic, the cradle of our democracy. It is the People’s House, and represents, in all its monolithic splendor and architectural glory, our American ideals and the hopes of our nation. To see it overrun and desecrated by faux patriots, many of whom were hellbent on killing elected officials, including the Vice-President, was shocking and disheartening. This was not supposed to happen here, yet it was happening.

Since then, I have alternated between feelings of sadness, hopelessness, anxiety, and anger. There’s been a lot of anger, enough for everyone involved.

My initial thoughts upon seeing the insurrection was about what we should do about it. I became analytical and thought about how we should punish those involved and make sure something like this never happens again. It was only later that the shock of what had happened wore off and I began to allow my emotions to come out. I know that seems backwards, but that’s how I’m built. Once the emotions started to flow, they flowed like a torrent.

I suspect it will be a long time before my emotions subside. As long as politicians keep trying to avoid responsibility for their actions and right-wing extremists continue to threaten our country and our democracy, I will remain angry and persistent in my hostility to their efforts and goals. They are antithetical to the values and ideals that built this country, and it is imperative, if we are to save our democracy, that we remain keenly on-guard to protect it from these anti-American, traitorous hordes.

Just like our nation, I want to know what comes next. Of course, that answer isn’t forthcoming, not anytime soon. But the one thing we can be sure of is, no matter what the future holds, things will never be the same.