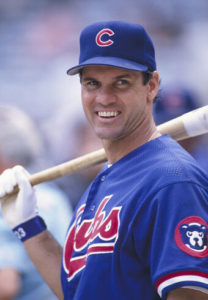 I miss baseball. Before our world was changed by the COVID-19 pandemic, I would routinely watch at least one baseball game each day. Sometimes more. Right now, we should be three weeks into the 2020 baseball season, and rather than writing this blog post, I should be watching a baseball game. Unfortunately, that’s not the world we’re living in right now.

Starting Pitcher – There were a few possibilities here. I’ve always been a big fan of Pedro Martinez. In fact, if I had one game to win and my life depended on it, I think it would be Pedro that I would choose to start the game. I also have an unnatural affection for Orel Hershiser. I loved watching him pitch for the Dodgers in the late 80s, especially during the 1988 World Series. But my favorite starting pitcher of all time is Greg Maddux. Oddly, it’s not the Greg Maddux in a Cubs uniform, but the one pitching for the Braves. He was at the top of his game during his days in Atlanta, and to watch him pitch with (and compete against) John Smoltz and Tom Glavine, was a sight to behold.

Catcher – Growing up watching the Cubs, I was spoiled getting to watch Randy Hundley. To this day, I consider Hundley to be underrated. After him came Jody Davis, who was like a folk hero to Cubs fans, especially when Harry Carey would sing about him during broadcasts on WGN. Joe Girardi was another Cub who was a fan favorite because he was raised in Illinois and went to college at Northwestern, in the Chicago metro area. But my favorite catcher of all time isn’t a Cub, it’s a Pirate. For whatever reason, I have loved watching Francisco Cervelli catch. I liked his demeanor on the field, the hard-nosed way he plays the game, and his sense of humor. One season in Pittsburgh, Cervelli, who is of Italian descent, but was born and raised in Venezuela (Wikipedia lists him as Italo-Venezuelan), gave dating advice as part of a Pirates promotion. It was hilarious. Here’s a sample:

First Base – I liked Mark McGwire as much as the next guy. It was fun to watch him hit homeruns. But he was a great hitter that just happened to play first base. To me, a really great first baseman has to be good with the glove. I loved watching guys like Mark Grace and Will Clark play the field. Keith Hernandez might be the best defensive first baseman I’ve ever seen. In fact, I think there’s a legitimate argument that Hernandez should be in the Hall of Fame. But my favorite first baseman of all time is Anthony Rizzo. Sure, I’m showing both a Cubs and a recency bias, but, if you watch him play the game for any length of time, I think you’d have to agree that there’s a lot to like. He crowds the plate just daring the pitcher to throw inside, he hits bombs, and he can field as well as any first baseman in the game. But the thing that makes him my favorite is how he plays the game with so much joy. That’s important to me. It is a game after all, and you’re getting paid millions to play it. The least you can do is be happy about it.

Second Base – This one is easy. Ryne Sandberg is my favorite second baseman of all time. In fact, he’s my favorite player of all time. He was a great hitter, a great fielder (notice a trend here), and he was a humble superstar. Again, I’m showing my Cubs bias, but the guy is a Hall of Famer.

Shortstop – When I was young, every kid in my neighborhood would try to backhand ground balls, jump in the air, and throw the ball to first, just like Don Kessinger. Kessinger was a prototypical shortstop during his playing career. He was a slick fielding, weak hitting player. That’s what most shortstops were in the 1960s, 70s, and into the 80s. He was easy to like. But when I first saw Ozzie Smith play shortstop, I saw talent like I had never seen before. He was the best fielding shortstop the games has ever seen, and he made himself into a good hitter. And like many of my other favorite players, Ozzie played the game with joy.

Third Base – My favorite third baseman wasn’t a third baseman for most of his career. In fact, he played more games at three other positions than he did third, but to me, Pete Rose was a third baseman. That’s how I remember him. And before the gambling controversy booted Rose out of baseball, he was one of my favorite players to watch. He was hard-nosed, aggressive, and willing to do anything to get a hit, field a ball, or do anything else to win a game. I loved that about him. As a less that stellar player myself, I tried to emulate Rose to get the most out of my limited talent.

Left Field – One of the constraints I put on myself when putting this list together is that I had to actually see the player play. If not for that constraint, Stan Musial might be my favorite left fielder. As honored and beloved as Musial is, I still think he’s underrated. He was just so good at everything. But I can’t chose him, so who will it be? Near the top of the list are Billy Williams (Cubs bias), Lou Brock, and Hideki Matsui. But my favorite left fielder is Lance Berkman. I have to admit, this answer didn’t come easy. Berkman played more games at first than he did in left, but I remember him early in his career with the Astros, and always remember him being a terrific hitter. Don’t get me wrong, Berkman could field too, but he is one of the few players on this list who was known as more of a hitter than a fielder.

Center Field – This is an easy one to answer, but a hard one to justify. I was a big fan of both Willie Mays and Ken Griffey Jr. They were both fantastic all-around ball players, and were a blast to watch. Andruw Jones was a wizard with the glove, and there isn’t anything that Mike Trout can’t do. But my favorite center fielder of all time is Jim Edmonds. He could hit, but it was his fielding that drew me to him. He was so graceful in the field, it was like watching poetry in motion. Okay, that’s probably overkill, but he was really good with the glove.

Right Field – How could Henry Aaron not be my favorite right fielder. He was an all-around great player, and a greart person to boot. I hold Aaron in extremely high regard, but he’s not my favorite right fielder. I could say the exact same thing about Frank Robinson, another player that is held in high esteem, but to my mind, is still underrated. Vladimir Guerrero was a hoot to watch, and Mookie Betts might end up being one of the greatest players of all time. But my favorite right fielder of all time is Ichiro Suzuki. There wasn’t anything that Ichiro couldn’t do. He could hit, field, throw, and he was fast. And as amazing as he was, his best days as a player may have been in Japan, before he came to the states.