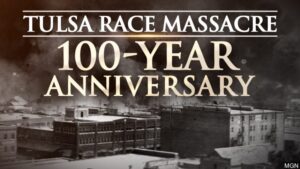 In case you’ve never heard of the Tulsa Massacre, here’s what the Zinn Education Project has to say about it:

“One of the most violent episodes of dispossession in U.S. history began on May 31, 1921 in Greenwood, a thriving Black neighborhood in Tulsa, Oklahoma. From May 31 through June 1, deputized whites killed more than 300 African Americans. They looted and burned to the ground 40 square blocks of 1,265 African American homes, including hospitals, schools, and churches, and destroyed 150 businesses. White deputies and members of the National Guard arrested and detained 6,000 Black Tulsans who were released only upon being vouched for by a white employer or other white citizen. Nine thousand African Americans were left homeless and lived in tents well into the winter of 1921.”

Learning about the Tulsa Massacre made me wonder if there were other events in our country’s history where blacks were terrorized and killed by white mobs. I suspected there were others, so I decided to dig into it. What I found stunned me.

U.S. history is replete with massacres of minority and marginalized people, including Native Americans, Blacks, Latinos, Asians, and LGBTQ people. In addition, Italians, Irish, and Jews have been the target of violence, along with laborers of various ethnicities.

Because of the facts of the Tulsa Massacre, my main focus was violence against blacks. I found thirty-four different incidents where multiple black people were killed or injured by violence. I find it amazing that I was unaware of almost every one of these massacres, including one that happened near where I grew up.

Why don’t we know more about these violent events? Why aren’t they routinely taught in history classes. I don’t know the answer, but I suspect that most school districts prefer to whitewash history rather than deal with the truth head-on. In the U.S., we tend to only want to remember the good parts of our history. But we can only grow and reach our potential as a nation if we acknowledge our entire history and learn from it.

That’s a conversation for another day. For now, here are the thirty-four black massacres I found, along with links if you’d like to learn more.