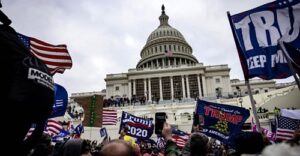 After a day like yesterday, how do we, as a nation, move forward?

This morning, I am struggling to find the words to adequately explain what we saw yesterday in DC. It’s easy to use words like “coup d’état” and “insurrection” to describe what happened in the Capitol, but those words only scratch the surface. To be sure, the words are accurate, but they fail to describe the emotions associated with the acts.

I am on the verge of disbelief. I know what I saw with my own eyes, but even after four years of the worst president in our country’s history, I was still unprepared to process what happened. I’m still trying to come to terms with how and why a putsch like this could happen in the United States. What I feel more confident about is how we must move forward if we are to avoid similar attempts to overthrow our government.

First, every single person who can be identified as involved in yesterday’s takeover of the Capitol must be tried, and if convicted, punished severely for their illegal actions. If anyone in the future thinks about following in the footsteps of these insurrectionists, they should know that they could pay a very high price.

Second, we need to know how security at the Capitol failed so miserably. Not only did Capitol police not prevent insurrectionists from entering the Capitol, in many cases, they assisted them. I’ve seen videos and photos of police taking selfies with the mob, moving barricades to make it easier for the mob to enter the Capitol, and helping people up the Capitol steps. This was a massive failure. Why did it happen? How did it happen? These protests were not a surprise. They had been planned for weeks. We need to know what happened so we can make sure it never happens again.

Third, politicians who shared easily debunked lies with the American people, and encouraged their supporters to rise up and “Stop the Steal” must be held accountable for spreading misinformation.

As an example, Sen. Josh Hawley (R-MO) knew that there was no widespread voter fraud. He knew that courts across the country had already ruled on lawsuits claiming fraud and unconstitutional vote counting methods. He knew that objecting to electors from Pennsylvania would not only cause damage to our democracy, but that such objection would fail. Yet, he moved forward with his objection, even after insurrectionists had taken over the Capitol. His actions accomplished nothing other than ingratiating himself with Trump supporters. It was a cynical ploy that violated his oath, but Hawley moved forward with it anyway, putting his own selfish interests ahead of the needs of the country.

Of course, Josh Hawley wasn’t the only Congressperson spreading misinformation and inciting rioters. There are hundreds of them, including Sens. Ted Cruz (R-TX), Lindsey Graham (R-SC), and Ron Johnson (R-WI), and Reps. Matt Gaetz (R-FL), Marjorie Taylor-Greene (R-GA), Louis Gohmert (R-TX), etc. They must be held to account. It may not be possible to remove them from office until the next election, but in the meantime, they must be marginalized. The actions they took to destroy our democracy is a stain they should never be allowed to wash away.

Finally, Donald Trump must be held to account for his lies and criminal actions. In the short-term, he should be impeached (It’s probably too late) or removed under the 25th Amendment (more likely). After yesterday, we can not have a president who encouraged violence against the Congress and our democracy, and who still refuses to accept the results of the election. He’s only in office for two more weeks, but he can cause considerable chaos and damage to the country in that time. He has to go.

In the long-term, Trump’s time in office must be investigated and he must be held accountable for any illegal activity he participated in. Even if the incoming administration decides not to punish Trump (something I suspect Biden will do), as a nation, we must still have a full accounting of the actions, legal and illegal, that occurred on Trump’s watch.

Trump and his supporters in Congress have spread misinformation that has disconnected half the population from reality, and which have radicalized a large group of people who are willing to attack and destroy our democracy. They have done this for selfish political purposes, and as of now, they have not had to answer for it.

Calling out and punishing politicians is the easy part. It should be the job of our elected officials to tell us the truth. Failing to do that should carry a high cost. But what about those of us not in Congress?

It would be easy to say that we need to tone down the rhetoric and accept the opinions of our fellow citizens. It seems nice, but how can those who love democracy co-exist with those hellbent on destroying it?

Our democracy is a fragile thing. We are only one election away from losing it. Those who would prefer an authoritarian government, such as those supporting Trump, can not be allowed to get a foothold in Congress or in the White House.

In other words, we should not endeavor to make a compromise with those that would damage or destroy our democracy. Rather than come together, we must crush the forces that push for authoritarianism, including far right-wing groups, white supremacist groups, neo-nazis, and others, including those who would prefer a kleptocracy, that would benefit the wealthy and burden the rest of us. We can give no quarter to these people. We cannot compromise nor can we attempt to appease. Our democracy cannot survive any accommodation with those that would destroy it.