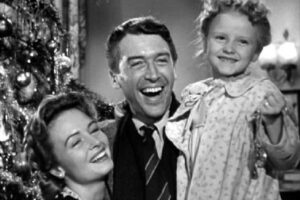 I don’t have many Christmas traditions. Now that the kids are older, I don’t even put up a Christmas tree anymore. But one thing I still do every Christmas is watch my favorite movie, It’s a Wonderful Life, starring Jimmy Stewart and Donna Reed.

The iconic film came out in 1946 to very little fanfare. It underperformed at the box office and, although it was nominated for five Academy Awards, it didn’t win any.

With the copyright expired, TV networks could show the film without paying royalty fees. It was free content for an industry always looking for ways to make a profit. Suddenly, people were rediscovering the film and falling in love with the powerful story of friends, family, and faith.

Karolyn Grimes had no idea any of this was taking place. Grimes had been a child actor in Hollywood when she went to an audition for It’s A Wonderful Life. While she sat in the waiting room before the audition, the mother of another child “accidently” spilled a cup of coffee on Grimes new dress. It might have thrown some people, but not Grimes. When it was her turn, the coffee stain prompted a conversation between her and the film’s director, Frank Capra. The six-year-old Grimes was cast in the role of Zuzu, George and Mary Bailey’s youngest daughter.

The year after filming It’s A Wonderful Life, Grimes appeared in another Christmas movie, The Bishop’s Wife, and a few years later she landed a role in the John Wayne classic, Rio Grande. But all was not great in Karolyn Grimes’ life. At the age of fourteen, her mother died, and just a year later, she lost her father. Grimes gave up the movies and her life in California, and was sent to live with an uncle and his unstable wife in Missouri. The couple were religious zealots who preached against the dangers of movies, singing, and dancing.

Grimes survived her years with her aunt and uncle, but rarely spoke about her life in California. She made friends, finished high school, and went off to school at Central Missouri State College. After graduation, she became a medical technologist.

Life went on for Grimes, but didn’t get any easier. She married and had two daughters with her first husband, who was killed in a hunting accident. She re-married and had five more kids. Sadly, her second husband died of cancer. Throughout these tragedies, Grimes spent much of her time cooking, cleaning, and running kids to piano lessons and sports practices.

She lived what many would consider a normal life until 1980, when It’s A Wonderful Life once again entered her orbit. The film had gained an audience, due in large part to it’s copyright-free status, and reporters came calling, requesting interviews and asking questions about the film. Problem was, Grimes didn’t remember much about it. She had filmed the movie thirty-four years earlier and had never watched it all the way through. In fact, she had fallen asleep during the film’s premiere. Before she could answer any questions, she first had to watch the movie.

Since then, Grimes has been busy attending screenings, holiday gift shows, movie memorabilia conventions, and her personal favorite, the annual It’s A Wonderful Life Festival in Seneca Falls, NY, which bills itself as the real-life Bedford Falls, the town from the film. While in Seneca Falls, she is often joined by Jimmy Hawkins, the actor who played her older brother, Tommy.

For most of us that love It’s A Wonderful Life, we’ll always remember Karolyn Grimes in the role of Zuzu saying one of the most iconic lines in all of film. Take a look: