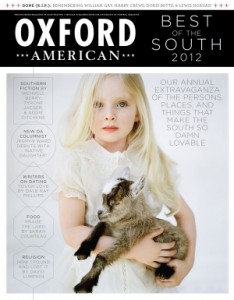 I had picked up a copy of the Oxford American because I wanted to read an article Tom Franklin had written about his relationship with the recently deceased writer, William Gay. I was interested in pursuing an MFA at the University of Mississippi where Franklin was teaching at the time, and I thought it would be a good idea not only to read a little of what he had written, but to also learn more about Gay, a writer who was extremely well respected, but who, at the time, was a complete mystery to me.

I was touched by Franklin’s personal remembrances of his late friend, and the article prompted me to buy a copy of I Hate to See that Evening Sun Go Down, a collection of Gay’s short stories. I enjoyed the book, and it helped to define for me what Southern writing, and particularly Southern Gothic, is all about.

In that same issue of Oxford American (Summer 2012), I found an essay written by David Lumpkin entitled “Church is Wherever You Are.” In the essay, Lumpkin told the story of the disappearance of his mother when he was fourteen years old. There were a lot of strange twists in Lumpkin’s story, including that his mother, to everyone’s surprise, was under investigation for theft at the time of she went missing. But the twist that stuck with me was the way his father turned to TV preachers to help him cope with his wife’s disappearance. I’m not sure why I latched on to that one odd fact, but I knew I wanted to write a fictional story about it.

I worked on a rough draft for the story back in 2012, but it really never went anywhere. Eventually, I put the story away and forgot about it.

A couple of years later, in the fall of 2014, I was looking for story ideas for a fiction workshop I would be taking the following spring at the University of Central Florida. I knew I’d have to turn in two short stories, and I really wanted to have one of them completely finished before the fall semester ended. I had no idea what I was going to write.

In late September of that year, I attended the MTSU Writes Writing Conference at Middle Tennessee State University. I had been asked to introduce the keynote speaker, Tony Earley from Vanderbilt University. I was excited for the opportunity, and looked forward to attending the conference.

As I listened to the various presenters, I thought about the difficulty I was having in finding a story to write. I knew the semester was about to get much busier, and I really wanted to have a story completed before that happened.

I remained lost in my thoughts until I heard the next speaker start to tell the story of how his mother went missing when he was just fourteen years old. Wait a minute, I remember thinking. I know this story. As I listened to the speaker (I couldn’t remember his name), I started to remember what I had read in the Oxford American, and what that essay had prompted me to write. Talk about an omen. I knew that I had to finish the story I had started two years earlier.

During the next break at the conference, I asked Karen Ford, the event organizer, about the guy who had spoken about his missing mother. “That’s David Lumpkin,” she said. “He teaches here at MTSU.” I got excited all over again. Not only had the essay been reintroduced to me, but the guy who wrote it taught in the same town where I lived.

I was so excited, I went up to David and introduced myself. It was then that I realized I really didn’t have anything to say to him. Why would he care that I had previously read his essay or that it had prompted me to write a story? I felt like an idiot. David was very polite, but it was obvious that he wasn’t particularly comfortable with the attention I was paying to him. I felt like I had blindsided the poor guy, and I knew I should just end the awkwardness and walk away.

I was about to end our encounter when I abruptly and involuntarily blurted out, “I’m writing a fictional version of your story.” Okay, I may be dramatizing it a bit, but this is how it felt to me. For some reason that I still don’t understand, I felt compelled to tell David that his life and his essay had prompted me to write a story. My excitement was genuine and my intentions were noble, but I’m certain that I must have seemed like a madman to him.

David probably should have called security or told me to leave him alone, but he didn’t. Instead, he was very kind and indulgent. I finally regained control of my faculties, and excused myself. I can only assume that I left David wondering what mental institution I had most recently called home.

I revised the story David’s essay had inspired, and got some excellent feedback when I presented it in workshop. This led to more revisions, and eventually, some quality time with my editor, Melanie Neale. Melanie had some great ideas (she always does), including the suggestion to change the title of the story. “Missing,” she said, was too bland. She proposed “Promised Land,” and just like that, the story had a new title.

And now you know the rest of the story.

Promised Land will be published later this week. Stay tuned…