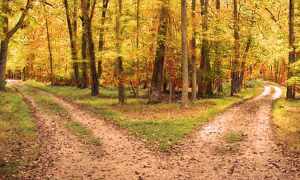 One of the most beloved, but misunderstood, poems in American literature is Robert Frost’s “The Road Not Taken.” For a lot of people, the poem is a call to live an exceptional life, eschewing the usual script and instead embracing the extraordinary. However, that wasn’t Frost’s intention with the poem.

“The Road Not Taken” is a relatively short poem, but it packs a lot into a few words. Perhaps the most famous line from the poem is:

I took the one less traveled by,

And that has made all the difference

I shall be telling this with a sigh

The narrator did not take the less traveled road, but he knows that at some point in the future, he will lie to himself and say that his life is what it is because he took the road less traveled.

There are two things I want to do with this blog post. First, I want to examine the background of “The Road Not Taken.” It has a funny, but tragic, backstory. Then, I want to share an analysis of the poem by writer Hugh Howey. I was struck by the thoughts on the poem Howey shared on Twitter, and I’d like to share them here.

First, let’s take a look at the entire poem:

THE ROAD NOT TAKEN

And sorry I could not travel both

And be one traveler, long I stood

And looked down one as far as I could

To where it bent in the undergrowth;

Then took the other, as just as fair,

And having perhaps the better claim,

Because it was grassy and wanted wear;

Though as for that the passing there

Had worn them really about the same,

And both that morning equally lay

In leaves no step had trodden black.

Oh, I kept the first for another day!

Yet knowing how way leads on to way,

I doubted if I should ever come back.

I shall be telling this with a sigh

Two roads diverged in a wood, and I—

I took the one less traveled by,

And that has made all the difference.

In 1912 Frost moved to England and befriended fellow poet Edward Thomas. Frost and Thomas often took walks to clear their heads after a day of writing, and to discuss each other’s lives. These walks were very important to both men.

Thomas had a tendency to regret his choices. After their walks where Thomas would choose the route, he would express his fear that a different route would have been better. His dissatisfaction over the path they had taken became a joke between the two men.

Upon returning to the United States in 1915, Frost sent a copy of the poem to Thomas. As discussed earlier, the poem was not intended to be a call to action. Instead, it was a wry jab at Thomas for worrying so much about the path that was taken and the decisions that were made. But like so many people in the years after the poems publication—first in The Atlantic in 1915, and a year later in Frost’s poetry collection, Mountain Interval—Thomas took the poem to heart and read it as a call to live boldly, choosing the path less traveled.

Frost couldn’t have known that the poem would encourage his friend to give up his life as a poet and join the British Army during World War I. And he must have been devastated when he learned that, two years after enlisting, Thomas was killed at the Battle of Arras.

Despite Thomas’ untimely demise, Frost’s “The Road Not Taken” has encouraged countless people to shun the common and live exceptional lives. But, of course, that was never Frost’s intention. Hugh Howey makes this point quite eloquently, and he compares The Road Not Taken with another of Frost’s most popular poems, “Stopping By Woods on a Snowy Evening.

Frost’s greatest gift — and the one most difficult to access — is his use of the unreliable narrator. His poems lie to us. These untruths conceal deep and profound truths.

The most fascinating thing to me about THE ROAD NOT TAKEN is that most people get the title wrong. Which is incredibly meta. Because I’m about to blow your mind. The poem is about two paths that are identical in one aspect: Neither path has ever been walked down.

People often refer to this poem as “The Road Less Traveled.” This comes from a line toward the end that is 100% a lie. And here is the genius I mentioned in the opening Tweet: Robert Frost lies to us, because he’s writing about us, and we lie to ourselves all the time.

See if you can find all four times.

The reason they have the same lack of wear is because these are life choices yet to be taken. The narrator has come to a crossroads in life, a great decision. College or gap year? Get married or keep dating? Settle down or move abroad?

These decisions give us pause, and so we sit at the crossroads and we study our choices, try to gauge how much we’ll enjoy each of the two paths before us. As Frost demonstrates, it’s impossible to tell! We haven’t walked either one before.

The lies begin in the third stanza with this line:

Oh, I kept the first for another day!

The only exclamation mark in the poem. The excitement of childlike mania. The insanity of naiveté.

The lie hardly lasts. Over the next two lines, we see the excitement of that exclamation mark dissolve into resignation. The narrator knows they’ll never come back. You can’t live both lives:

Yet knowing how way leads on to way,

I doubted if I should ever come back.

We’ve all felt this, the desire to live two mutually incompatible lives. Nest, but roam. Dabble, but commit. Sample, yet dive deep.

We want to live unconventional lives, but have all the comforts of convention.

The big lie comes at the end. What’s amazing is that the narrator KNOWS they are going to lie to themselves. At the end of their life, they will say that they took the path less traveled, and that it was the correct choice, but they will never know.

The hint isn’t just the four times we were told the paths were the same for lack of wear. The hints are the sigh with which the lie is told, and the halting nature of the telling of the lie.

I took the one less traveled by…

He hesitates. He almost tells the truth. But the only way to hold the ego together is to convince himself he didn’t make a mistake, because the tsunami of regrets for all the paths he couldn’t walk down would drown him.

The lie is the thing.

And so we can’t even remember the name of the poem, so deeply do we want to believe the same lie. We claim we took the road less traveled, when the OPPOSITE is true.

Each of us took the only road we traveled. The other road we left undiscovered.

Back to STOPPING BY WOODS ON A SNOWY EVENING:

STOPPING BY WOODS ON A SNOWY EVENING

Whose woods these are I think I know.

His house is in the village though;

He will not see me stopping here

To watch his woods fill up with snow.

My little horse must think it queer

To stop without a farmhouse near

Between the woods and frozen lake

The darkest evening of the year.

He gives his harness bells a shake

To ask if there is some mistake.

The only other sound’s the sweep

Of easy wind and downy flake.

The woods are lovely, dark and deep,

But I have promises to keep,

And miles to go before I sleep,

Can you spot a possible lie in this poem? Even if your brain can’t, your heart might. Your subconscious might. I think all of our hearts do.

Like THE ROAD NOT TAKEN, this poem gives us three stanzas of truth before we get a final stanza of outright rebellion.

The dark woods are death. The narrator recognizes the end:

Whose woods these are I think I know

The absence of a farmhouse, this place between a frozen lake and the woods, no place to support life.

The primal urge to resist, our subconscious fear of death, is his horse, ringing its bells, shivering and confused, urging him forward.

To ask if there is some mistake.

Such a brutal line. Brutal.

The woods are lovely, dark and deep

Something enticing about the end of a long and difficult journey. Almost alluring to succumb to it. But then we get the final BUT:

But I have promises to keep

The last sad lie is right here, repeated twice, as we often repeat things while our attention is drifting or our energy flagging.

I have so much I want to do before I die.

I have so much I want to do before I die.

I promised myself I would do these things. I promised.

But I know whose woods those are. And the animal inside me is ringing a bell, hoping there is some mistake.

The two poems tell the same story of a life too short for all it hopes to contain.

Both poems are about the things left undone.

In one, the lie is that the choices were the correct ones.

In the other, the lie is that there’s time yet to live.

The truth is simple and sad:

We have but one life; it will be shorter than we wish; live it deliberately and wisely.