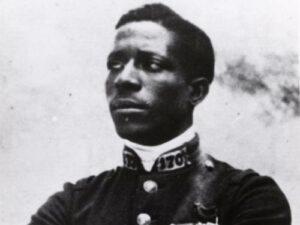 Several years ago, I was working on a writing prompt based on Jimmy Buffett’s song, “He Went to Paris.” I did some research and found out that “He Went to Paris” was loosely based on the life of Eddie Balchowsky, a veteran of the Spanish Civil War who, after being injured, was taken to Paris to recuperate. The injury resulted in Balchowsky losing a hand, but that didn’t stop him from becoming a well-regarded poet, artist, and piano player.

While researching Paris in the 1920’s, I came across a character that makes a cameo in my book, but who deserves a lot more notoriety. His name is Eugene Bullard and I’d like to tell you a little about him.

Bullard was born in 1895 in Columbus, GA to William and Josephine Bullard, former slaves from Stewart County, GA. Eugene attended school in Columbus and completed the fifth grade.

Bullard’s father believed strongly that black people should always display dignity and self-respect, even in the face of overwhelming white prejudice. The elder Bullard was once the victim of an attempted lynching, the attack coming in front of young Eugene. Even after the attack, his father continued to encourage Eugene, the seventh of ten children, to hold his head high and act with dignity. Eugene never forgot that lesson.

The elder Bullard used to tell his son stories about France, a place where slavery had been abolished and blacks were treated the same as whites. Young Eugene dreamed of someday going to France where he could be judged by his character rather than the color of his skin.

At the age of 11, Bullard ran away from home, with the intent of going to France. He landed in Atlanta, where he took up with an English clan of traveling gypsies. He tended horses for the gypsies, eventually learning to race. The gypsies told him stories about the equal treatment blacks received in England, which changed his ultimate destination goal to England.

As a 16-year old, Bullard developed a reputation as a competent jockey, and was hired by a family in Dawson, GA to ride their horse in the 1911 County Fair races. But his dream was not to be a jockey. He still wanted to make his way to Europe, where he could live a life free of racial discrimination.

In 1912, he stowed away on a German freighter out of Norfolk, VA and landed in Aberdeen, Scotland. From there, he made his way to London, where he earned a living as a boxer, and as a performer in a slapstick troupe known as the Freedman Pickaninnies. He trained with a well-known boxer known as Dixie Kid, who arranged a fight for him in Paris. It was this trip to Paris that convinced Bullard to settle there. He continued to box in Paris, and also worked in a music hall until the beginning of World War I.

Although Bullard was an American, he wanted to fight for France. A few months into the war, he joined the 3rd Marching Regiment of the Foreign Legion. Because he wasn’t French, he could only join the French Foreign Legion. He saw action as a machine gunner at Picardy, Artois, and the second Champagne offensive.

Later, he joined the 170th French Infantry Regiment, known as the “Swallows of Death.” It was during this time that Bullard received the nickname, the “Black Swallow of Death.” In March 1916, at the Battle of Verdun, Bullard was severely injured. He was cited for his acts of valor at Verdun and received the croix de guerre.

While he recuperated, Bullard learned to fly. When he was well enough, he received further flight training, and received his pilot’s license in May 1917. During a two-month period in 1917, Bullard flew 20 successful combat missions. When the Americans joined the war, Bullard applied to be a pilot in the United States Army Air Service, but was declined because only white pilots were allowed.

For his service to France, Bullard received several medals, awards, and citations, including the Medaille militaire, Croix du combattat volontaire, and the Medialle de Verdun.

Following his discharge, Bullard returned to Paris where he found work as a jazz drummer at Zelli’s, a nightclub owned by Joe Zelli. Bullard partnered with Zelli, and obtained a club license, which allowed the club to stay open past midnight. This was a boon to the club, and it thrived, becoming one of the most celebrated clubs in Montmartre. But Bullard was restless. Despite his success, he quit Zelli’s and joined a jazz ensemble that travelled to Alexandria, Egypt. He also began boxing again, competing in two fights while in Alexandria.

After his time in Egypt, Bullard returned to Paris where he earned a living hiring musicians for private parties, giving massages, and as an exercise trainer. He later managed Le Grand Duc, a jazz club, where he befriended and hired the American poet, Langston Hughes. In 1928, he bought Le Grand Duc from famed jazz singer Ada “Bricktop” Smith. It was at Le Grand Duc that Bullard became acquainted with such luminaries as Josephine Baker, Louis Armstrong, and French flying ace Charles Nungesser. Bullard’s fame in Paris garnered the attention of Ernest Hemingway, who based a minor character on Bullard in The Sun Also Rises.

In 1923, Bullard married Marcelle Straumann, a woman from a wealthy French family. They had two children, but divorced in 1935. Bullard was granted custody of their children.

When World War II began, Bullard agreed to spy on his German customers for the French government. Despite the war, the Germans still often frequented his club. But following the Nazi invasion of France in 1940, Bullard joined France’s 51st Infantry Regiment and was injured fighting in the Battle of Orleans. He escaped to Spain, then was flown to New York City, where he was hospitalized for his wounds.

Bullard’s return to the United States was not a happy one. The fame he enjoyed in France, as both a war hero and a club owner, was gone. He found work doing odd jobs, including selling perfume and as a security guard. He even worked as an interpreter for his old friend, Louis Armstrong. But life in the states was not nearly as good for him as it had been in France.

In 1945, at the conclusion of the war in Europe, Bullard returned to Paris to reclaim his club. Unfortunately, it had been destroyed during the war. He received a settlement from the French government, and used the money to purchase an apartment back in New York.

Despite fighting side-by-side during World War II, whites and blacks returned to their pre-war animosity in the United States. In 1949, during a concert by Paul Robeson in Peekskill, a riot erupted. Bullard was beaten by an angry mob, including local law enforcement officers. The beating was captured on film and was included in the Oscar-winning documentary, Paul Robeson: Tribute to an Artist. Despite the photographic evidence, no one was ever prosecuted for Bullard’s beating.

For the next several years, Bullard lived in near anonymity. His daughters had married and he lived alone in his Harlem apartment, which was decorated with photos of his famous friends in France, as well as the 14 French war medals he had earned. He found work as an elevator operator in Rockefeller Center, and in 1959, was interviewed by Dave Garroway from the Today Show, about his military service and heroism. Following the interview, he received many letters of support. Bullard died in October 1961 of stomach cancer.

Despite his death, the honors continued to come in. In 1989 Bullard was inducted into the Georgia Aviation Hall of Fame, and in 1994–thirty-three years after his death–he was posthumously awarded the rank of second lieutenant in the United States Air Force. In 2019, a statue of Eugene Bullard was erected in his honor at the Museum of Aviation in Warner Robins, GA. Today, a sign stands near his home in Columbus, GA describing his early life.

Eugene Bullard may not be a household name, but what a life he lived. I’m glad I got to know a little about him.