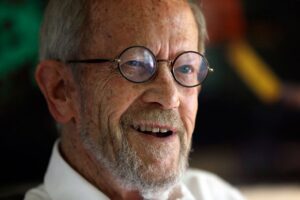 Elmore Leonard is, by many accounts, the greatest American crime writer in history. Many of his books, like Freaky Deaky, Get Shorty, and Rum Punch, were turned into big Hollywood blockbusters. His Raylan Givens series was adapted into the popular TV series Justified. What’s less known about Leonard are the westerns he wrote, including 3:10 to Yuma and Hombre, and for purposes of this post, his book on writing, aptly titled, Elmore Leonard’s 10 Rules of Writing.

For Leonard, who died in 2013, writing was a job. He didn’t approach it as a hobby or wait until inspiration struck him. He sat down at his desk each morning, usually writing in longhand, and didn’t stop until 6:00 pm. He even worked through lunch, often snacking while he wrote.

Surprisingly, at least to me, Leonard didn’t care about plot. He started with characters, first naming them (a process that could take weeks), and then he let them loose. They’d talk to him, and their words would lead to the action that determined the plot. This is a very literary way to approach writing and it surprised me that Leonard, the king of the crime novel, employed it. Obviously, it worked for him.

During a talk at the New York Writers Institute, Leonard explained his approach to creating characters by assuming one of their personas and tattling on their creator:

“What he does, he makes us do all the work, the people in the books. Puts us in scenes and says go ahead and do something. No, first he thinks up names. Takes forever to think up names like Bob and Jack. Jackie for a woman, a female lead. Or Frank. Years ago anyone named Frank in one of his books was a bad guy. So then he used Frank as the name of a good guy one time and this Frank wouldn’t talk, refused to come out and become the kind of person Elmore wanted. So he changed his name to Jack after thinking of names for another few weeks, and it felt so good he couldn’t shut the guy up, I mean this Jack, not Elmore. So he names us and he says okay start talking. So that’s what we do. Sometimes if a character has trouble expressing himself he’s demoted. He’s given less to do in the book, or he might get shot. What can also happen if a minor or even a no-name character shows he can talk, he can shove his way into the story and get a more important part. So Elmore names us, gets us talking to each other, bumping heads or getting along okay and then I don’t know what happens to him, I think he takes off, leaves it up to us. There was a piece written about him one time in The Village Voice called ‘The Author Vanishes’ and it’s true.”

Leonard’s book on writing is a short tome, weighing in at only 96 pages, but it’s chock full of good, practical advice. The rules are geared toward crime writers, but writers of all stripes can find something useful in Leonard’s thoughts.

As a writer trained in literary fiction, numbers 8 & 9 from the above list jump out at me. MFA programs train their writers to include rich, detailed descriptions of characters, places and things. We’re trained to paint a detailed picture of the scene and the characters in it. Leonard says no. He believes that overly specific descriptions slow down the story and tends to tug on the reader’s sleeve reminding them of the writer’s presence. Interesting. This is something I’ll have to think about.

In an interview with writer Martin Amis, Leonard expounded on his ten rules and came up with what can be thought of as eight addendums to his rules. Here they are along with some of his thoughts from the interview:

Addendum 1: Pick a routine. Stick with it.

“I write every day when I’m writing, some Saturdays and Sundays, a few hours each day. Because I want to stay with it. If a day goes by and you haven’t done anything, or a couple of days, it’s difficult to get back into the rhythm of it. I usually start working around 9:30 and I work until 6. I’m lucky to get what I consider four clean pages. They’re clean until the next day, the next morning. The time flies by.”

Addendum 2. All good writing has a point-of-view.

“First of all, I’m always writing from a point of view. I decide what the purpose of the scene is, and at least begin with some purpose. But, even more important, from whose point of view is this scene seen? Because then the narrative will take on somewhat the sound of the person who is seeing the scene.”

Addendum 4. Writing in the third person lets you switch to the bad guys.

“I like third person. I don’t want to be stuck with one character’s viewpoint because there are too many viewpoints. And, of course, the bad guys’ viewpoints are a lot more fun. What they do is more fun. A few years ago, a friend of mine in the publishing business called up and said, ‘Has your good guy decided to do anything yet?’”

Addendum 5. It all starts with character, and they better be able to talk.

“I start with a character. Let’s say I want to write a book about a bail bondsman or a process server or a bank robber and a woman federal marshal. And they meet and something happens. That’s as much of an idea as I begin with. And then I see him in a situation, and I begin writing it and one thing leads to another. By Page 100, roughly, I should have my characters assembled. I should know my characters because they’re sort of auditioned in the opening scenes, and I can find out if they can talk or not. And if they can’t talk, they’re out.”

Addendum 6. Minor characters ought to assert themselves, too.

“[I]n every book there’s a minor character who comes along and pushes his way into the plot. He’s just needed to give some information, but all of a sudden he comes to life for me. Maybe it’s the way he says it. He might not even have a name the first time he appears. The second time he has a name. The third time he has a few more lines, and away he goes, and he becomes a plot turn in the book.”

“When I’m fashioning my bad guys, though (and sometimes a good guy has had a criminal past and then he can go either way; to me, he’s the best kind of character to have), I don’t think of them as bad guys. I just think of them as, for the most part, normal people who get up in the morning and they wonder what they’re going to have for breakfast, and they sneeze, and they wonder if they should call their mother, and then they rob a bank. Because that’s the way they are. Except for real hard-core guys.

Addendum 8. Appreciate the craft and you’ll never get tired of it.

“It’s the most satisfying thing I can imagine doing. To write that scene and then read it and it works. I love the sound of it. There’s nothing better than that. The notoriety that comes later doesn’t compare to the doing of it. I’ve been doing it for almost 47 years, and I’m still trying to make it better.”

Here is the video of Leonard giving a talk at the New York Writer’s Institute:

In 2006, BBC Two did a special on Leonard, allowing him to talk about his background and his writing process. There are a few more “writing advice” gems in this video as well: