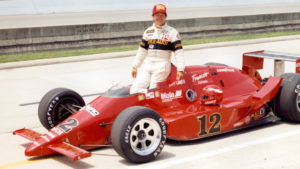 When I was writing Driven: A Novel, I was inspired by the stories of several people. John Roberts and Mickey Munday, stars of the documentary Cocaine Cowboys, had a big influence on the story. So did Bill and Don Wittington, brothers who raced sports cars and indy cars, and paid for it all through their marijuana smuggling operation. The incredible story of another racer, John Paul, Sr., added to my knowledge of drug smugglers who used their ill gotten gain to pay for their racing addiction. But the guy who really influenced and inspired the book was an interesting and unassuming guy by the name of Randy Lanier.

Randy was born in Virginia and raised in South Florida. He fell in love with racing in the late 1970’s after attending a car show and stumbling across a booth for the Sports Car Club of America (SCCA). They were promoting amateur club racing, and Randy was an easy target. He loved the idea of pushing a car to it’s limits on a race track, so he signed up for an SCCA drivers school, where he received his competition license. Little did he know that his passion for racing would shape, and eventually derail, his life.

Randy drove a Porsche 356 in regional events, but he wanted to move up and race against better competition. He was having some success and making a name for himself, but his big break came at the 1982 24 Hours of Daytona. Famed racer Janet Guthrie fell ill, and her Ferrari team owner asked Randy to fill in for her. The car retired early with transmission trouble, but the effort earned Randy an invitation to race at the 24 Hours of Le Mans in France later that year.

It’s important to point out how unusual all of this was. Randy was a relatively low-level racer when he was invited to join the Ferrari team at Daytona. It was a fluke. He just happened to be in the right place at the right time. To then parlay that into a ride at Le Mans is amazing.

Randy’s finishes at Daytona and Le Mans were nothing to write home about, but his personal performance impressed people. This new guy was pretty good.  And the experience cemented Randy’s decision to be a professional race car driver.

In 1984, Randy co-founded his own team, which he called Blue Thunder Racing. His partners in the venture were brothers, Bill and Dale Whittington. The team had great success, even winning the IMSA GTP championship in their inaugural season.

Randy tried to translate his success in sports cars into open-wheel cars in 1985. He attempted to qualify for the Indianapolis 500 that year, but officials decided he was too inexperienced to take on the speedway. Randy would not be denied. He came back in 1986 and set the rookie record for qualifying, previously held by Michael Andretti. Randy ran a good race, finished tenth, and was named Rookie of the Year. Not a bad result for a guy who had only been racing professionally for three years.

Meanwhile, Bill Whittington and his brother Don were arrested on charges of conspiracy to distribute marijuana. It was alleged that the Whittington drug importing business was where they had gotten the money to fund Blue Thunder Racing.  Both Whittingtons eventually pled guilty, Bill receiving a fifteen year sentence, and Don got eighteen months. Randy wasn’t implicated, and he denied having any knowledge of the Whittington’s illegal business. But the Feds weren’t too far behind Randy. Eight months after the Whittingtons pled guilty, Randy was indicted on charges that he had smuggled 150 tons of marijuana into the U.S. When the government obtained a second indictment against him, Randy went on the lam. He left the country, eventually making his way to Antigua.

Randy was out in his boat on a bright, sunny day in the Caribbean when he saw a large ship blocking the entrance to the port, preventing him from entering. He had a feeling something was up, so he took a smaller boat onto the beach and tried to get back to his home. Law enforcement wouldn’t cooperate, instead chasing him around the island until he was caught and sent back to the United States. Randy was eventually sentenced to life in prison without the possibility of parole under the Continuing Criminal Enterprise (AKA: Drug Kingpin) sentencing guidelines.

It seems incredible that anyone could be sentenced to life in prison for importing marijuana. The drug is actually legal (or decriminalized) now in several cities and states. To be fair, Randy was guilty. He even agreed to spend a reasonable amount of time in prison, but the Feds weren’t in the business of being reasonable, not when it came to drug smugglers. So, Randy languished in prison until October 2014. It’s unclear why he was released, but the Federal Government agreed to release him after more than twenty-five years in prison.

I find Randy’s story endlessly interesting. I would love to talk to him in person, and it would be great to actually race with him in an amateur endurance race. I just bought a new race car. You never know, maybe it will happen.

If you’re interested in reading a fictional story with a lot of factual inspiration that explores the intersection between drug smuggling and sports car racing, I invite you to check out Driven: A Novel, now available on Amazon and other fine book stores.