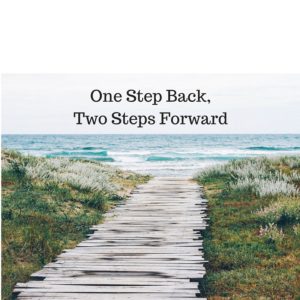 Writing this book has been a lesson in patience, frustration, anger, and disappointment. It has also shown me that sometimes, good things can come from bad situations.

The book I’m talking about is The Ones That Got Away. It’s my latest novel, and I’ve been working on it, in its various iterations, for five years or more. It’s about a man who’s part of a bad marriage. After having an argument with his wife, he goes to bed in the guest room, and wakes up in his college apartment, just twenty-two years old, and ready to live his life over. All of his memories are intact. All he needs to do is decided who he’s going to share his life with in his second (and third, and fourth) chances at life.

A while back, I wrote another blog post detailing my frustration with writing the book. In a nutshell, I had written about 40% of the book before I lost it all due to a computer malfunction. The good news in that post was that the second version of that 40% I lost was better than the first. So, although it was frustrating and infuriating, at that point, things had worked out. Since then, things have just gotten more frustrating.

After writing the previous post, I’ve dealt with even more snafus. At one point, I lost two full chapters due to my own inability to save my work. Then, I lost four chapters of edits. Recreating the edits wasn’t difficult, but it was annoying to have to do it again.

In August, the manuscript was finally done, and I sent it to Sean, my editor. I was feeling good about the book until I got it back from Sean. He had cut over 17,000 words, and suggested that I add several more chapters. Man, was I disappointed. I had wanted to have the book available by October 1 (after initially missing the March 1 deadline). Now, it looks like the book won’t be available until after the new year. UGH!!!

Sean and I talked about the changes he suggested, and I agreed with about 90% of them. Sean suggested edits are going to make the book better. It’s going to tell a fuller story. And the writing is going to be better. So, despite my frustrations, the results are going to be worth the headaches.

As things stand now, I’m still working on Sean’s edits. I’d like to say that the book will be ready January 1, 2020, but with the holidays just around the corner, I’m setting a new publication goal date of March 1, 2020. That’s one full year after I had intended on publishing the book, but I’m convinced it’s better to delay putting out a great book than it is to quickly publish a mediocre one.

Okay, back to work.